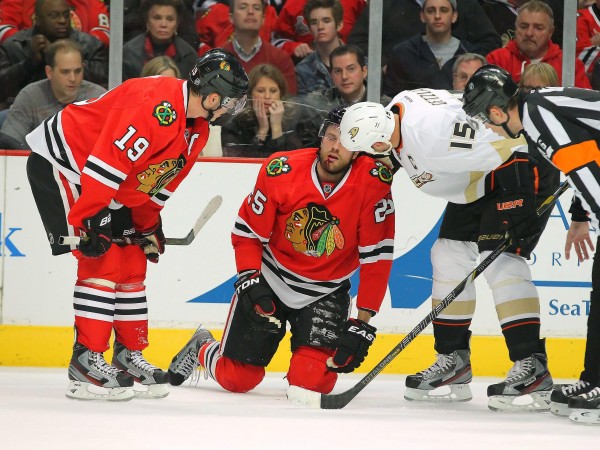 After seeing it in person tonight, I’m more convinced than I was before that the Hawks are going through nothing more than a midseason malaise, combined with some injuries to key players. While the Hawks can pay lip service to saying that they thought this was an important game because they hadn’t beaten the Ducks, upon evidence on the ice I’m not buying it.

Tonight, it wasn’t so much anything the Ducks did. The Hawks for the first 40 were missing passes by feet instead of inches, they were bobbling whatever passes did actually land on tape, and just generally looked like they’d been at The Houndstooth a little too late last night. It seemed like the Ducks were even more conservative in this one than they had been in the previous two games. Usually, it was only one Duck forward in on the forecheck, which the the Hawks made harder than they had to too often.

Overall, it just felt like the Hawks didn’t have all that much urgency. It hasn’t in a few games to be honest. And why should there be? They’re being careful with Sharp and Hossa because they can be. After this, they’re still in the driver’s seat for the conference. The division has been over for a while. If this were an 82-game season and they were doing this in March with the same margins, we’d pretty much dismiss it. That’s what I’m going to do.

-That said, there are some things to complain about, and they mostly have to do with Q. I made my feelings about starting Ray Emery tonight know in The Indian. I didn’t like it. And while there was little he could do about either goal, the first one felt like one he could have had even though it rang off the post.

Let’s leave that one alone. Who did Q match up against Perry and Getzlaf tonight? Hammer and Oduya. This was after letting Marlboro 72 swallow Calgary’s top line whole on Tuesday, and after Ebenholts och Elfenben were torched by Kopitar and Co. on Monday. I thought we’d settled on who handled the big boys from here on out? Who got pinned in the zone leading to Souray’s goal? Who were the only negative CORSI’s on the team? See if you can figure it out.

-Meanwhile, Keith and Seabrook (as confused as Seabrook seemed most of the night) were making Peter Holland and Cogliano’s line sorry they were born.

-Oh, and joining the Swedes on that deciding shift was Dave Bolland’s line. And Bolland for that shift in his zone looked like an elderly man who can’t find the store he wants in the mall. Kane was right to try and check Getzlaf in the high slot there, and Bolland watched like he bought the seat next to me. He needs to be flying out at Souray because why does Kane have to check two players while Bolland picks up exactly no one? His effort to get out to Souray even after he got the puck was half-hearted at best. Either Bolland’s hurt or he doesn’t care because it’s not the playoffs. Either way, my patience wears thin. I wonder if Stan’s does too, and if Bolland won’t be calling some outpost home in the very near future.

-On the positive side, everything Nick Leddy does these days tickles in special places.

-The third line had another ho-hum night, with Stalberg seemingly taking a puck in the face every couple minutes. I hope no one expected them to dominate all year. They are a third line after all. They’re not being helped by Andrew Shaw’s tendency to pick up Kris Versteeg’s worst tendencies. Maybe this will all be fixed when Bolland returns to where he needs to be and Shaw goes to where he needs to be.

-It’s so dismissive to say I don’t fear the Ducks after they took all six points this year, but I still don’t. Hossa and Sharp missing was another big deal tonight, and even after a (in your best Mick Jagger voice) “What does it matter?” effort from the Hawks, they needed a shot to bounce off Hjalmarsson’s stick to go in. I’m sorry, I’m not a believer.

Chin up kids. Just a fog. It’ll pass. Probably about the time Stan does something, which it is time for.