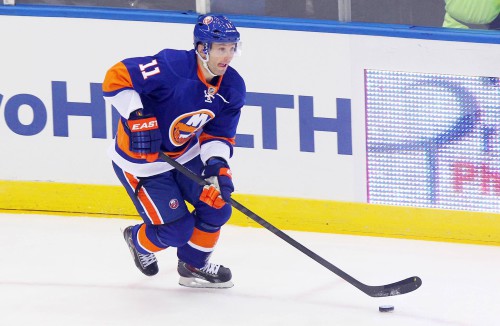 A suspension would have been a reach at the very best, and it almost certainly would have had to come from the league and not the Hawks. He hasn’t been charged, and the clauses that would apply in that case are murky at best. You could take the opinion that either the Hawks or league should have tried anyway, and even if they’d lost the battle with the Players’ Union they probably win the PR War. Not sure where I sit on that.

Anything else would have involved a ‘leave of absence,” and that still might come but the Hawks have basically put that in Kane’s court. The Hawks can’t make him take one, though I suppose they could have strongly urged it behind closed doors and in back channels. But he’d still have to agree to it, and he doesn’t have to. It’s up to him whether he wants to face the media scrutiny right after getting out of his car or not, but we all know he almost certainly doesn’t really give a shit.

And at the end of the day, I’m sure the Hawks are still pretty terrified of driving an irreversible wedge (I think I saw them open for Soundgarden in ’96) with a player who most likely is going to be available to play and makes a huge difference for them. It’s one thing to talk tough and moral during the summer. But play it out, and if the Hawks get out the whippin’ belt now and then Kane isn’t charged at all or walks from charges later, he might think, “Well fuck these guys” and demand a trade. And the smart money still says the Hawks don’t want Kane dressing for anyone else but them for the rest of his career, because banners matter more to them and a lot of others than #brand and #image. Fuck, the latter two are based on the former.

It’ll be a mess, a circus, a zoo, whatever term you want for the first day or two. And then it’ll die down until something happens in the investigation/case back in Buffalo.

But there are other things to talk about, I swear!

-The most interesting name to pop up is that of Lubomir Visnovsky. Now, it would be understandable if the thought of once-mobile and puck-moving d-man in his late 30’s showing up in red gives you chills after last year, but at least this one isn’t coming off nearly losing his leg and has actually skated in the past six months. Though I guess with Lubo that’s not always a guarantee.

Lubo has had pretty strong, if not outright startling, possession numbers for the Islanders for years. It comes with caveats of course. One, he was in the East, and we’ve seen how hard the transition to the West can be. Second, he was heavily sheltered in terms of competition, but that’s not something he wouldn’t find here as well if he were to make the team.

Still, the Hawks don’t have a third puck-mover on the roster right now, and I don’t even see another candidate unless Ville Pokka is going to make a leap absolutely no one sees coming this soon. And no, Kyle Cumiskey very much does not count. If he’s got enough tread on the tires for one more year, Lubo and Daley would provide two PP QBs that could save Keith some minutes if the Hawks had any interest in that (they don’t) and get him off a unit he doesn’t really provide that much to anyway. Then again, Lubo and Daley also provide matching d-men who only point one way and are near-awful in their own zone, and considering Q’s smoking habits he’s probably a stroke-risk without it. It’s worth watching.

-In the Welcome Back Cotter portion of the TC roster, we see Michal Rozsvial and Tomas Kopecky. I should probably just resign myself to the fate (COACCCHHHH) that if Rozsival is anywhere near the 606 zip code he’s going to make the team and Q can have another blanky. Considering the direction his ankle was facing when we last saw him, I would consider it a minor miracle if he can move at all.

As for Kopecky, I suppose if I squint and swallow hard he’s someone who can actually play the left side. I mean he can stand on the left side and wear pads, and possibly fog a mirror. Anything else I doubt he can do. Let’s hope this passes in a hurry.

-The two kids on the back end worth keeping an eye on are Pokka and Svedberg, though I wouldn’t rule out Sam Jardine making some people notice (even though he’s only signed with Rockford).

-Jake Dowell is also attending, as I can only assume he was in a drivable distance.

-Corey Tropp and Man Shitter are probably going to fight, Bowman will talk about how they like that element, one will make the team, and I’m going to shit out my fist after shoving it down my throat.