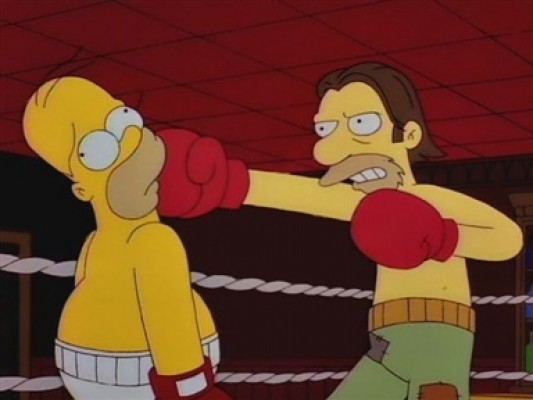 I know we get Simpsons heavy on this blog, but sometimes the analogies are just so apt. Tonight’s game felt like Homer Simpson’s boxing tactics. The Hawks allowed the Wings to repeatedly, and futilely, punch them about the face until they tired themselves out. Except the Hawks never really got to the point where they simply pushed them over. At least until after they’d surrendered a point to a division rival that they didn’t have to.

Once again, this was post-lockout hockey at its most glorious. If by glorious I mean tired, sloppy, and just kind of all over the place. And it is strange indeed for the Hawks to spend a large swath of a contest trying to serve it on a plate to Detroit, and watching Detroit merely stare at the silverware trying to figure out which one was the salad fork.

To let the Wings in these days when they’re such a mess, you have to continually give them power plays and be sloppy in your own end. Check. And yet they couldn’t take advantage, mostly because the entry on their power play looked like a bank robbery planned by ADHD-riddled children. But hey, you take your advantages where you can find them I guess.

So it’s six in a row to start the year, before embarking on a pretty nasty looking six game road trip (looking even nastier with each San Jose win).

-The first period wasn’t all that bad. While the Wings had some possession and attack, they never really made anyone sweat outside a shot or two. When the Hawks did get the puck deep and got a forecheck going, the Wings defense was absolutely helpless. They lost pretty much every race for a puck, and when they didn’t they were turning it over right in front of Jimmy Howard, who must’ve been ready to knife at least three of his d-men. On another night, Hossa and Bolland bury the chances they were given from the slot and this one was over before the Mites got out there to jump over sticks and blocks.

-However, in the second, when the Hawks weren’t taking penalty after penalty, they couldn’t find each other in their zone and resorted to that infuriating ploy of just trying to fire it up the boards. Either it was kept in, or just ceded possession to Detroit. It wasn’t much fun. It didn’t get all that better in the 3rd either, when the Hawks were in need of oxygen tanks. Especially those who were killing penalties.

-I hesitate to pile on the Wings here, because I’ll never shake the feeling that they’ll bite me in the ass later. Even after I’m dead. But the thing about Detroit that didn’t get enough attention when they were in their pomp is that they were the hardest working team in the league. I don’t doubt the desire is there to still be so, but the legs most certainly aren’t.

-Aside from Saad, Frolik, Stalberg, Kruger, and Bickell, every other Hawk forward skated like they had just been shown a video of a c-section.

-And the problem with taking so many penalties is that it keeps Rattlehead, Bickell, and Leddy off the ice. Underneath the fireworks of the Four Horsemen this season is that Stalberg and Bickell have been driving the Hawks on the forecheck, and Leddy from the back-end. They lose more than you think when those players can’t get on the ice.

-McClure mentioned it on Twitter, but Stals on the right wing gives him so many more options offensively. Defensemen are still wary of getting beat to the outside, but now have to account for him having a better angle to shoot from his off wing. Thus, you get tonight’s OT winner where he can come inside and either fire or find someone on the other wing.

-Another solid performance from Crow. He still looks a little funny at times, but hey it’s working.

-Y’see what happens Duncs when you open yourself a shooting lane?

-It says Detroit only won 52% of the draws. That sure feels low. Speaking of which, Don Cherry mentioned it on Coach’s Corner last night but I hadn’t really noticed until being in the building tonight, but good god are linesmen ornery in dropping the puck. I think maybe four faceoffs took place without someone getting tossed.

-I’m going ahead and claiming credit for this blog for DLR being the power play song. Until someone proves otherwise, I’m going to do so.

Six is better than five. On the road now. Keep it going as long as you can, and don’t you dare have this streak snapped in B.C.