What’s The Most Annoying Sound In The World?: Avs at Hawks Preview/Driveway Salting

It’s the sound of the Avalanche coming to the United Center. Because they’ve won five of the last six here, even though by any measure the Hawks should be painting the walls of their new dressing room with the brains and innards of the Avs. But they don’t seem to here. Certainly not last time, when Semyon “Kiss With A Fist Is Better Than None” Varlamov walked out with his 73rd shutout of the Hawks, or at least that’s how it feels.

The Avs roll onto Madison St. as perhaps the hottest team in the West. The Hawks and Avs have the most points over the past month, only bettered by the Capitals and whatever sport they’re playing in the East, as well as the Panthers. They’re 12-3-3 since December 1st.

However, that isn’t due to any change in approach or philosophy, as their record is pretty much due to Varlamov’s .942 SV% in December, including a .960 mark at even-strength. Throw in some firework shows from MacKinnon, Duchene, and ThreeYaksAndADog, and you get a pretty hot team. The Avs still blow when looking deeper, because over the past six weeks the only worse possession team than them are the Canucks and the Canucks require gas masks to watch these days. It’s a 45.2% mark, if you need actual details.

Varlamov has cooled down since the calendar flipped, but they haven’t slowed down with wins over the Kings, Predators, and Blues. They’ve put up 13 goals in those three games, though all of them were at home and the Preds and Blues came in with huge scoring problems of their own and each put up three goals.

Tyson Barrie comes in perhaps the hottest Av, with 10 points in his last eight games and he was truly a force the last time they were here. The Avs have spread out the scoring a bit with SapsuckerFrog sliding down to the second line with Carl Soderberg and Blake Comeau, and John Mitchell has been moved down to the fourth line which is where he’s belonged the entire time. Mikhail Grigorenko, taking time out from fudging the age on his passport again, has earned himself the third center role with Iggy on his right, and Iggy has scored in two of his last three including his 600th goal, though he’s still usually way off the pace these days. Which sucks, because Iggy rules.

Erik Johnson is out a couple weeks which has moved up Barrie to the top pairing causing his explosion, but it means that the Avs second pairing is Francois “My Left Turn Signal Is Always On” Beauchemin and something named Andrew Bodnarchuk, so you can see where the Hawks would like to attack.

For the Hawks the song should remain the same, with the only change being Rozsival platooning in for Scuderi and TVR feeling a whole lot more excited about this one. Crawford will get the start, and the only reason the Hawks had to go to overtime the last time these two met was Scott Darling was determined to play more than 60 minutes for some reason.

We’ve been over this and over this. Given the Avs’ lack of structure on any part of the ice the Hawks should win. Given their possession-allergic ways the Hawks should win, as even with a dip the Hawks are still a much better possession team. But it almost never works that way. as the top end speed of the Avs means the Hawks can’t haul them back on the backcheck as easily as they do other teams and their mistakes are punished more heavily because the Avs can create more space than others. And Varlamov always stands on his head at the United Center. So throw logic out the window.

Last time they met here the Hawks tried to battle MacKinnon’s line with Hammer and Seabrook. When it was Keith and Hammer together in Denver things went a little better. That should be the case tonight, though the Avs bottom six isn’t a total embarrassment. Still, this should be a good night to see what Gustafsson’s transition game looks like.

If you’re going to tonight’s game, pick up a copy of our gameday program sold outside the UC. Our vendors will be cold and will need the company. If you’re not, you can get the digital edition right here.

For All The Cows – Flames vs Hawks Preview, Pregame Thread, Sales Pitch 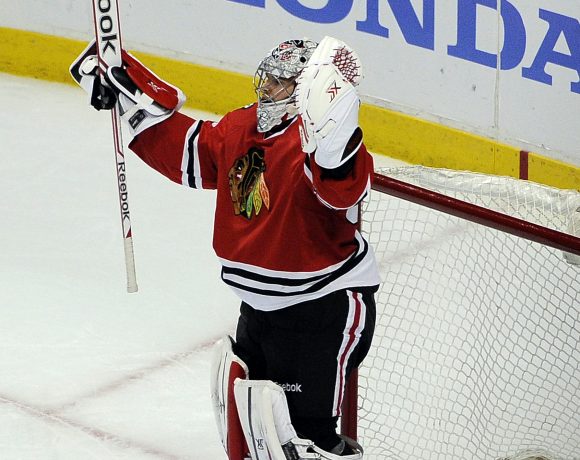 Blood on the Rocks: Blackhawks 2, Blues 0