What are we supposed to do with this? 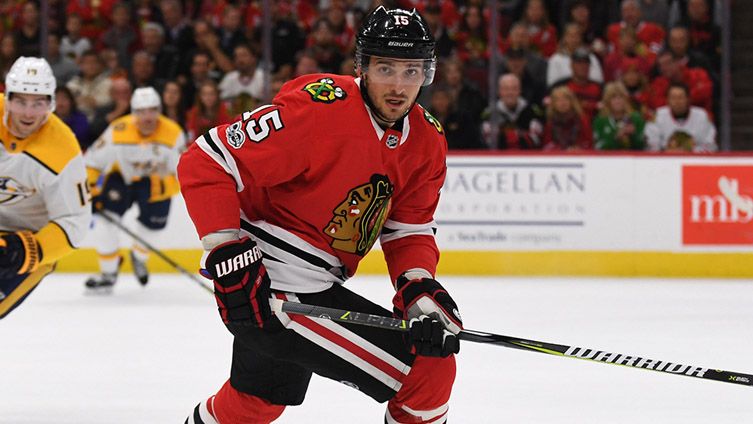 One of the stranger themes that is constantly present with the Hawks year in and year out is the Trade Guy. It seems like each offseason – or at least every other year – there has been at least one player whose combination of play, contract, and being surpassed by other players just proving to be better, leads to him being an extremely obvious trade candidate both from the sensibility standpoint and the fan outrage standpoint.

First it was Nick Leddy, then it was Patrick Sharp, followed by Bryan Bickell, and now it’s Artem Anisimov. Wide Dick proved to be the prize of the first Brandon Saad trade, and he really has been perfectly fine for the Hawks in the three years he’s been here. He’s netted at 20 goals in each of his three seasons in Chicago, a feat he had only achieved once prior to landing here. A good chunk of those are probably a direct result of playing with Patrick Kane for three years (and Artemi Panarin for two of those), but it’s still a decent selling point if your trying to build value on the trade market, which we are.

The analytically minded are not going to be as bullish on Anismov, and for good reason – he has only broken 50% shot share at 5v5 once in three years in Chicago, but he’s also never dipped below 49% so it’s not like he’s getting skulled out there. It’s basically a back and forth when he’s out there, which isn’t exactly ideal but is still adequate enough to not be maddening. Again folks, we’re going full on used car sales pitch here.

Anisimov does have some obvious shortcomings that are definitely less than ideal for a center, like the fact that is really slow and also terrible on the dot. He’s a perfectly fine player and one that might truly be able to contribute to a good team if used properly, or eat top six minutes for a middling or bad team and do a pretty good job. Basically, if Stan Bowman is worth his salt (and I think he is), he should be able to build a market for Anisimov. The question, though, is how good that market would be.

Back at the trade deadline, the Hawks were rumored to be considering trading him, but the best offer they got was a third round pick from Columbus. But the trade deadline doesn’t always bring out the full market because it seems like teams are always hesitant to players that aren’t the “biggest” names on the market at that time. The NHL Draft and free agency season has become the big event for major moves as teams try to restructure themselves for the new seasons by plugging holes or adding new elements, so Anismov’s market is probably going to have at least a few takers. But the market isn’t your only obstacle.

Anisimov has a full NMC that runs until July 1, so that throws a major wrench in any plans that Stan may have had to try and move him at Friday’s draft. And this is where it gets murky, because if you’re Anisimov you might be smarter to waive that NMC this week and give yourself a bit more control over where you play next year rather than handing in a 10-team list on June 30 only to have a 1-in-1o shot at your preferred location come July. Not that Stan would ask Wide Dick where he wants to go and then only try to make it work there, but if Stan gets a deal put together on Friday and calls up Anisimov’s agent, maybe it makes more sense to just say “yes” then and know you’re wanted where you’re headed rather than go into the new league year with only an inkling of an idea of where you’ll be come October.

I think the Hawks might be able to sell a team like Carolina on taking Anisimov as part of a package for Justin Faulk, and I genuinely think Carolina would be a nice landing spot for Wide Dick while also striking me as a nice place to play. Is that more attractive than trying to sort through which third of this league is desirable enough to play in to include them on an “okay” list?

Given that the Hawks are pretty much set at their top two center spots at this point with Toews and Schmaltz, while also being rumored to have interest in John Tavares, it’s starting to feel more like “when” Anisimov gets traded rather than “if” he gets traded. It doesn’t feel particularly likely that it happens this week, but stranger things have happened, and it’s all going to come down to what level of control Wide Dick wants on his future. It’s at least something to keep an eye on come Friday.