Well, We're Waiting – The Commited Indian.com's Season Preview: And Then There's Maude (The Rest Of The Forwards) 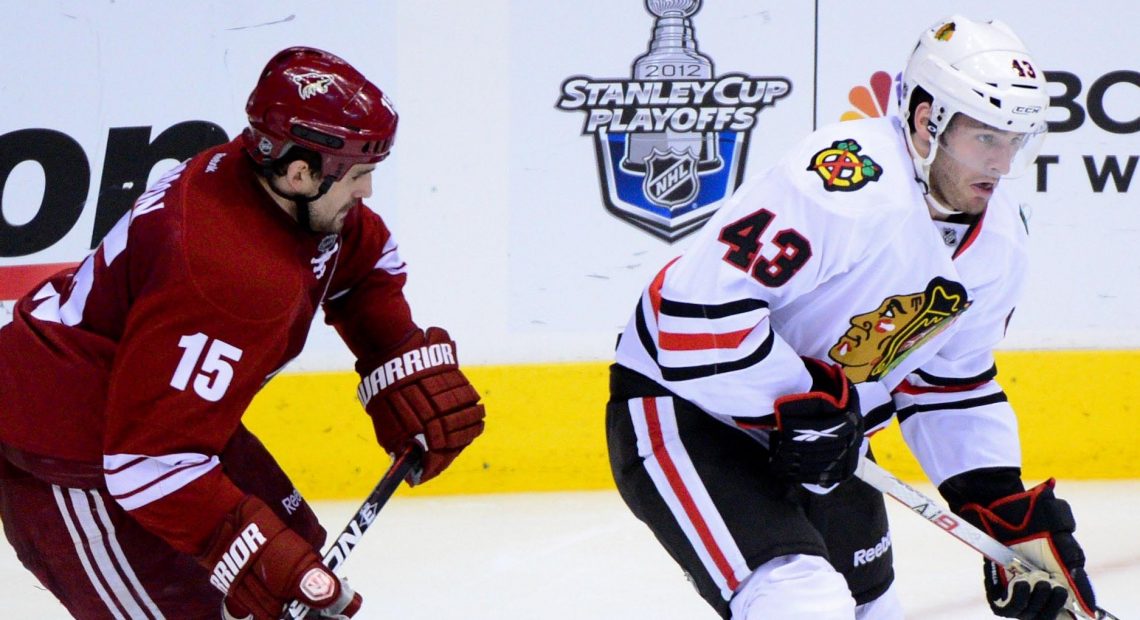 So let’s clean up the rest of the forwards, as in those who will or might make an appearance or two in the Indian Head this season. It might be more than you expect, as this compacted, back-to-back heavy schedule could lead to the injuries piling up. So let’s wrap it up and we can move on to the blue line.

Fine. Look, there’s nothing that Bollig does that helps the Hawks win. This whole “protection” argument is a complete falsehood, and you have to look no further than Marian Hossa’s head becoming Raffi Torres’s speed-bag with Bollig on the ice to see the absurdity of this argument. Bollig is not fast enough to be a physical presence on the forecheck. He’s a drooling, slow doofus who will hurt the Hawks because he can’t skate more than 4-6 minutes per night in a season where they absolutely have to have four lines rolling. He’ll play, he’ll fight, the rabble will giggle with laughter, and those of use with functioning neurons will shake our heads in disbelief.

This one’s up for debate. There are some who would like to see Saad finish the year in Rockford. There are those who want to see him up in the top six because he brings more there than Carcillo.

I’m in the latter category, but that doesn’t mean I think the first category is wrong. While Saad has been hit and miss in the A this season, when he’s hit he’s been utterly dominant. This is a true power forward, or he will be one day. He gets in the corners, he takes the puck to the net, and he sees the ice well. His playmaking ability will surprise you. Sadly, he also would probably be a better fit on the right wing, where Kane and Hossa already are. But he can play on the left. I think he starts the year here, but maybe that’s more out of hope than expectation. I know you’d get more out of him than Carbomb right now.

Well, he would up the team’s allotment of handsome. Pirri is probably only in camp because Ben Smith got hurt. But he does deserve it. Pirri’s numbers at The Rock don’t jump out at you, 10 goals and 26 points in 36 games. And he can’t win a draw to save his life. But if Shaw at center doesn’t work and Kruger continues to be ouchy, Pirri is the next actual center in line. And he can do a job. There have been times where he’s stood out above everyone else at Rockford, and times he hasn’t. He could work a little harder. But he’s got nice hands, could make things happen on the power play, and if he had to come up and play five games or whatever he wouldn’t kill you.

This one’s a bit of a longshot, because he wasn’t even invited to camp. But here’s a player who can score from the left side, and if you’re not a Stalberg fan that leaves only Patrick Sharp who can do so. And Morin has been playing well lately in the Rock. More importantly, he’s been physical and getting to the net, which are things the Hawks need more of. Sure, at his size he might get killed at the NHL level, but fearlessness is not something you want to take away from him. It wouldn’t take too many injuries in the top six to get Morin a look. I’ve been an unabashed Morin fan since he arrived, because I think he’s got some things you can’t teach. Worth a look at some point.

Speaking of on fire, Smith has been a point per game in his last 20 or so. If he hadn’t hurt his hand in a silly fight on Friday, he’d probably be in camp right now. Smith has an advantage over Saad and Morin in that he can play 4th line minutes. There are more slots that he can take up. He’s also been fearless in getting to the net, and might have a slightly higher IQ than the other two right now. You should fully expect Smith to get a game or two at least at the highest level when he’s healthy again.

Another longshot, but this one isn’t his fault entirely. Hayes started off wonderfully at Rockford this season, and looked a little stronger and quicker on his skates. And then the orders came from upstairs, maybe simply because they were bored, to move Hayes to center. He’s been lost since. Hayes isn’t a center now, and probably isn’t going to be. A return to win would see him do what he does well, which is forecheck, and get around the net. Hayes has a scoring touch you love to see in a big forward. Like Morin, while he isn’t top of the list, it won’t take too many injuries for him to get a look at some point. And it’ll be on the wing, so he should be playing wing at The Rock.

Unlikely, but it’s always hard to ignore you’re AHL team’s leading scorer. Where he fits? I don’t know. He probably can’t play on the top six. Though he would show the desire, at his size playing an energy role might get him killed. But he’s more a center than Shaw or Mayers, even though he’s been playing wing in Winnebago County. Some injuries, and it wouldn’t be a shock to see STP get a call. The dude has guts if nothing else. Oh, and a comically long stick.