Turn It Up: Hawks at Sharks Preview/Avoiding Your Family

CAGE IN THE WATER: You know what… just follow @stace_ofbase on Twitter. I have no idea who’s writing Fear The Fin these days.

The 2nd leg of the annual Circus Trip begins tonight, and the degree of difficulty goes up a bit for the Men of Four Feathers as they will face the hottest team in the league in San Jose, before doubling up in SoCal on the weekend with what might be the only legitimate teams in the Pacific (whatever the Ducks record might be). Considering the Hawks have only started this trip 1-1-1, it might look a little daunting.

The Sharks have usually been a pretty good possession team and value for their points but that’s only sort of true this year so far. They’re a middling Corsi team, carrying a score-adjusted mark of 49.7. The main story is that for once a highly sought backup from the previous year has turned into a damn good starter this year, as Martin Jones is carrying a save-percentage of .929 and a goals-against of 2.02. Where would the Oilers be if they’d gotten him instead of Cam and Magic Talbot? Jones, aside from a blip in Boston, was pretty much exemplary on the trip and the biggest reason they came home with nary a blemish.

Other than that though, the Sharks are taking to Peter DeBoer’s ways in that they’re one of the stingiest teams in giving up shots, scoring chances, and high-danger scoring chances at even-strength, ranking 7th, 3rd, and 3rd in those categories. So they might not be creating all that much offensively (though they’re 11th at 2.76 goals per game they’re someone what buffeted by a 8.2 shooting percentage) they make it awfully difficult for teams to get prime looks at Jones.

For the first time I can remember the Sharks are at least boasting two plus pairings on the blue line, with the perennially underrated Marc-Eduoard Vlasic (you remember he beat out Seabrook for Team Canada and deservedly?) paired with Justin Braun and new signing Paul Martin leveling out backwoods shaman Brent Burns somewhat.

Up front, they might be a little deeper than we’re used to seeing, and DeBoer has moved Marleau back to the middle at times. Joe Thornton and Joe Pavelski on the top line continue to run the show, even though Thornton will assuredly get blamed when something goes wrong and after Marleau is traded for no reason. Marleau and other new signing Joel Ward along with Hertl the Turtle are holding down the second line, and while Joel Ward probably shouldn’t be on any team’s top six it’s working well so far.

The Sharks are filling out their bottom six with a variety of kids and Tommy Wingels (it’s a name not a condition). Chris Tierney, Melker Karlsson, Barclay Goodrow (which is really his name), and one or two others who have shuttled the 10 feet between the NHL and their AHL locker room have held their own.

For the Hawks, this one seems to come too soon for Teuvo Teravainen, which means Brandon Mashinter can continue to waste our time on the 4th line with Kruger  and homecoming Andrew Desjardins. Toews looks to be continuing to skate between Garbutt and Shaw, with I guess the hope being that he’ll continue playing in the blind rage he showed Saturday at being stuck with two doofuses on his wing. Hossa will continue to wonder how nearing 500 goals earns him the right to play with the mysteriously loved Tanner Kero.

In past seasons, when the Hawks have been the realness this is where they’ve turned up their game and set the tone for December when they usually cement their positioning. But given their struggles on the road, and that DeBoer is not an idiot, they’re going to have to figure out how to keep Thornton and Pavelski going off on their 2nd and 3rd pairings as Draisaitl and Hall, Monahan and Gaudreau, and Thing 1 and Thing 2 have done on this trip. Q might want to do the quick change operation and have any pairing that isn’t Keith-Hjalmarsson flee the ice ASAP when they see San Jose’s top line.

The Sharks certainly will be feeling their oats, and will use this as some sort of litmus test to see just how real that road trip was. Should make for good viewing to give yourself a hangover and a reason to not talk to your family tomorrow. 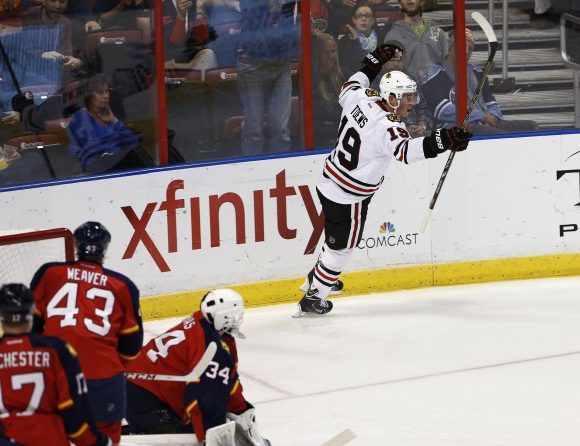