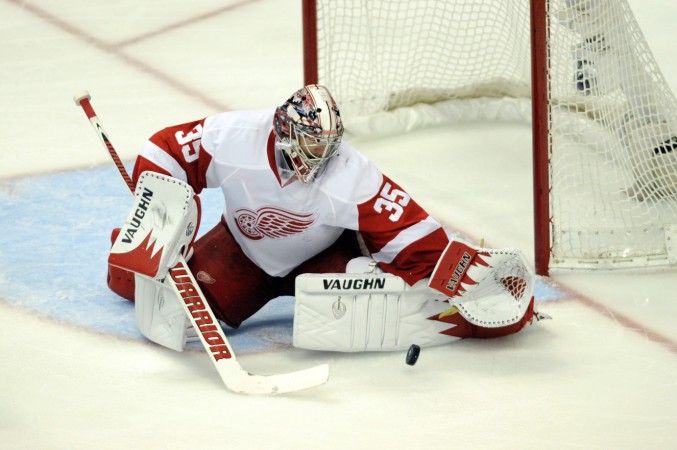 Oh no! I made a musical reference to a non-Detroit band! Killion’s going to shit a chicken!

Anyway, when you talk to Scum fans (at least the most reasonable ones, but boy is that a world’s tallest midget contest), you get the feeling that they have an inordinate amount of faith in Jimmy Howard. On the other side, you get it because a lot of the Wings goaltending has been so bad over the years (whatever the win-loss record might say) that an actual above-average goalie might look even better than he actually is.

Before I get a bunch of tweets and comments about how I’m totally undervaluing Howard from the Great Unwashed of Southeast Michigan (and that one dude in Kansas), let me be clear: I don’t think Howard sucks at all. He’s very good. And in a positional matchup, this is the only area where the Wings can boast even a push with the Hawks. And any goalie who punches Corey Perry in the back of the head has to be somewhat admired.

But how good is Howard? At times, he was sensational against the Ducks. But he never held them to less than two goals in a game. And while he saw 30+ shots in six of the seven games against Anaheim — losing the one he didn’t, actually — there wasn’t a 45-save Picasso that took your breath away. And don’t most people feel that if the Hawks average between 33-35 shots as the Ducks did, they’ll probably score a little more?

Another factor you’d have to ignore to treat Howard as The Messiah In A Mask is that his record against the Hawks is in need of some serious polish. He’s 4-7-5 with a SV% of .905 and a GAA of 2.79 in 16 career starts against them.

To counter that, Howard was very good against the Hawks this year for the most part, just not getting a win. He was heroic in that first game in Detroit this year, and pretty steady in the two games at the UC. But then, there’s that whole four against in less than 30 minutes at the end of March there.

You’ll hear a sentiment that Howard can steal this series from the Hawks. But he never has done anything like that in the playoffs before. And it’s not like Mike Smith last year who never had the chance to before he actually did. Howard has. And like everything else, he’s been good but not defining. His best performance probably came two years ago in a sweep of Phoenix and then a near-miss from down 3-0 against the Sharks. But he was scorched by the Preds last year — then again the whole team was.

And that’s essentially how Howard will go — how the Wings go. If their defense is getting overrun by the speed of the Hawks forwards and he has to repel 40 shots and a lot of prime chances, he’s just not going to be GORT and win it by himself. He can certainly hold the Wings in it, but win it? I have to be convinced of that. If the Wings defense miraculously can limit the Hawks and they don’t get to unleash the whole arsenal, than Howard can certainly win it — with “it” being a limited ask. But I don’t see that happening.

As for his actual play, Howard is more athletic than he gets credit for and capable of the highlight-reel save as he never gives up on a play. But he also can get lost out of his crease on occasion, and there are a lot of times when his rebound control could be considered charitable. As the Wings defense is not the biggest they have to be the quickest to wrap up sticks and bodies before they get to those loose pucks. The Hawks will have to crash through at times with the bodies they have that can do that. Against this blue line, they most certainly can.

I expect Howard to be good this series. Bordering on very good. But then again, Corey Crawford usually saves his best for Detroit. Which means Howard would have to be other-worldly to give Scum a real chance. There are some IRS-signer odds on that one.

Howard has left practice early again. He’s been bothered by a sore hamstring but it hasn’t prevented him from playing well.

Howard left practice early today, which is not the first time this has happened this spring. He’s battling a sore hamstring, but that’s apparently been the case all playoffs. Needless to say if it gets worse and the Wings have to go to Monster….well, let’s just say we’ll be going to California with an aching in our heart.