Tigers Spotlight: The Drawn Out End Of Miggy 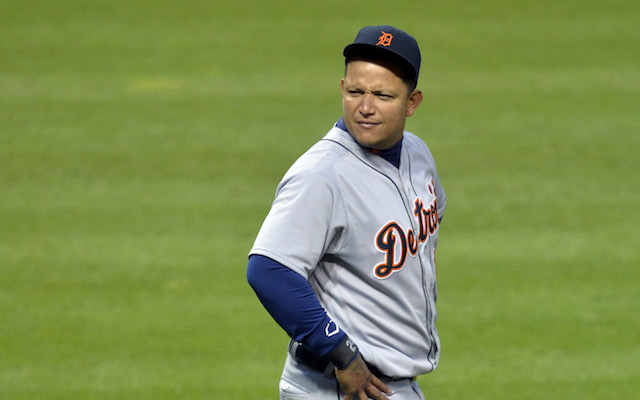 When teams are trying to come up with any other reason for draining the free agent market other than collusion or straight-up greed, we suppose they could use Miguel Cabrera’s contract as a cudgel. No one wants to locked into paying a hitter in his late 30s $25M or $30M while they slowly turn purple in the sun. Although it’s working out ok for Joey Votto. Not so much the case for Miggy.

Cabrera will go down as one of the best right-handed hitters of his era, and if it wasn’t for Mike Trout and whatever planet exiled him here, you wouldn’t find anyone better. Since joining the Tigers in 2008, only Trout and Votto have surpassed Miggy in WAR and offensive runs. He was the heartbeat of a string of great Tigers teams that won four AL Centrals in a row (before the Dodgers made that kind of thing de rigueur). Miggy wasn’t ever able to bring home a World Series and fulfill the dream of Mike Illitch (the one other than robbing the poor citizens of Detroit blind), but that wasn’t really on him.

What made Miggy so entertaining in dangerous is he did it all at the plate. He walked, he didn’t strike out, and he was just as likely to cut your heart out with a simple opposite-field single to score two than some bomb into the concourse. There was nowhere to go to get him out consistently, and he was more than happy to continually take whatever was on offer.

So while Miggy’s contract is ugly now, one wonders what the Tigers were supposed to do. Surely sentimentality still has a place in sports somewhere, and Cabrera is the greatest Tiger since…well, ever? Ok, not Ty Cobb. And maybe Trammel and Whitaker have claim to the previous era. Kaline and all that. Still, it won’t be long after he retires that Miggy’s number is going up on the wall at Comerica. At the time of signing, Miggy was the most feared hitter in the game or thereabouts, so maybe his decline was also off in the distance. It was 2013, remember. Could they really have just let him walk away? The cold-hearted calculations say they should have, but that doesn’t work all the time in the real world. It was also hard to see in 2013, when Cabrera signed the extension that didn’t kick in for another three seasons. It was overexuberant for sure, and perhaps a lesson every team might have taken too much to heart.

That said, the Tigers are still on the hook for $30M for four seasons each after this one, and this one is ugly. And that’s after Miggy missed all but 36 games last year, and it’s clear the effects are lingering. Miggy is struggling through knee problems this year after the groin injury last year, and now he can’t play in the field for the rest of the season. Not that Miggy ever really could, but the Tigers will have to bend their lineups around him once again. Good thing for the Tigers it doesn’t really matter.

As it does with most older players in an ever-speeding world, Cabrera can’t deal with velocity as well. Cheating for it has left him swinging at pitches out of the zone far more than he ever has in his career, and that’s led to some pretty horrific numbers on curveballs. Miggy still hits the ball hard (40% hard-contact rate), and he was above 40% well before just about everyone was. Miggy is walking less than ever, striking out more than ever, and hitting for less power than ever.

The Tigers are in just at the start of a rebuild, so he’s not costing them wins they might need. And maybe he sells a few tickets to fans who know it’s going to be a couple years at least before games in downtown Detroit matter again. But if it’s two years, what do you do then? With his physical condition, it’s highly unlikely that Cabrera can reclaim his former glory again.

Perhaps an injury settlement. Perhaps an unspoken agreement if Miggy retires that he’ll still get the money. The money’s gone, the only hope is there isn’t some standoff between player and team if he wants to keep playing but the Tigers want to move on. No one’s going to take that contract, no matter how much of it the Tigers are willing to eat. And that’s if Miggy ever hits again, which hie might not.

Perhaps if they got that World Series, it would be less unpleasant. Maybe it won’t be unpleasant at all, given what Cabrera meant to the Tigers. Before Miggy, the Tigers hadn’t won a division since 1987 (though they did go to a World Series as a wildcard, the only year in that stretch they’d won over 90 games).

No one ever gets the ending they want.

Tags: Detroit Tigers it was always going to be like this Miguel Cabrera