Because seemingly nothing can ever be simple or straightforward with this iteration of the Hawks, they now find themselves in an unfamiliar situation under Joel Quenneville: being forced to win a Game 6 at home in order to force a Game 7 after tying the series at 2-2 on Saturday. And in their way remain the Anaheim Ducks, who are looking to punch their ticket to the Cup final while keeping themselves undefeated in regulation this post season.

Though the Ducks emerged victorious after a short overtime frame on Monday night, the longer this series has progressed, the more cracks in the facade have come into sharper relief. The once-impenetrable Frederik Andersen has now allowed 9 goals in his past two games, with his save percentage dipping 33 points from .957 to .924 since before Game 4. Particularly egregious was the goal he allowed to tie the game late in regulation from a less-than-zero angle from the corner. That said, he is still plenty athletic enough and capable of robbing the Hawks blind as he did in the early goings of the series. The only consistent way to solve any goaltender is with a volume of shots against thereby forcing him to have to make save after repeated save.

On the Ducks’ blue line, things have also started to bow under the pressure of continued zone entries by the Blackhawk forwards. After three straight games of having a 50% or better of shot attempts, Simon Depres has turned in two straight games of 31% and and 36%, with parner Cam Fowler not doing much better. The pairing of Stoner/Vatanen is a known tire fire particularly on the road, which leaves only the de facto top unit of Beauchemin and Linholm to get any drive for the Ducks from the back end. And even then, most of that has been bouyed by the subtly excellent and effecient Lindholm, as Frechie’s age and sluggishness are put on full display any time a Hawk forward hits the line with any kind of speed.

In front, Captain Kappa Alpha Scro Dog has continued to pile up the assists while mostly surfing on PDO, with the team shooting nearly 10% with Getzlaf on the ice and Andersen stopping just shy of 96% of the shots he’s faced at evens. Getzlaf has mostly seen an injured Marcus Kruger across from him and he’s been played mostly to a draw in terms of possession (51%), but it could be argued that a player of Getzlaf’s skill is going to create more dangerous opportunities for himself and his teammates, namely his chief scumbag cohort Corey Perry. The key for the Ducks’ success has been Ryan Kesler, as they’d hoped he’d be when they made the trade for him last summer, as he’s been just dangerous enough that the Hawks cannot afford to get Jonathan Toews away from him even on home ice. But given the stakes of tonight’s game, that might be a chance the Hawks have to take.

As for our Men of Four Feathers, it appears that the plug has finally been pulled on Kimmo Timonen, with David Rundblad seemingly destined to return to the lineup tonight. While everyone’s favorite Ken Doll on skates had an extremely rough go of it in Game 1, that was without the benefit of having last change. That last change also gives Quenneville the benefit of hiding both Cumiskey and Runblad with their respective babysitters, and gets each on their proper side to be able to pass and clear pucks on the forehand.

The latter part of that will be what’s important, as the Hawks were completely reckless with the puck at both their own and the Ducks’ blue line, which allows a skilled team such as theirs to be opportunistic and most times puts the puck in the back of the net. Corey Crawford has been as equally wobbly as Andersen over the past two games but he has the advantage of the team in front of him carrying the play, and the Hawks don’t need him as a result as much as the Ducks need Andersen.

The more time that these two teams play, the more it benefits the Hawks, now more obviously than ever. But they’re going to need to start cashing in on their opportunities if this is going to go get to a Game 7. They have the talent and the experience to do it. It doesn’t have to end tonight, and it won’t. Not tonight. Not this team. Let’s go Hawks.

If you’re heading to the game tonight, make sure to pick up a copy for our gameday program outside the UC. We’re outside Gates 2 and 3 on Madison, as well as on the south side of the UC on Wood and Monroe, as well as Damen and Monroe. If you’re not going, you can get the digital version right here. 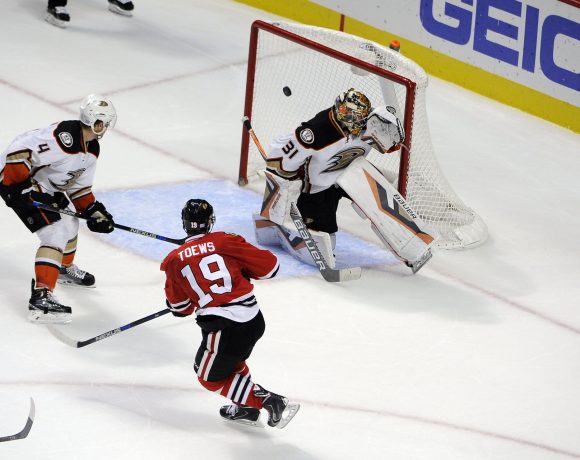