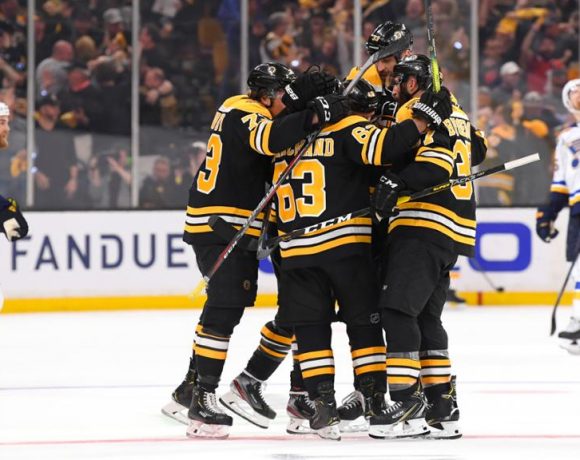 As it’s the Final, we’ll give you actual recaps instead of the smartass quips we’ve specialized in the past couple months. They’ll just take a while because we have to stop throwing up first.

If you’re watching this series while holding your nose and just hoping that it will end quickly, then last night is what you wanted. Yes, the Bruins were a bit rusty…for about 10 minutes. After that, everything we’ve thought about the Blues-their defense isn’t that good, Binnington has been fine but hardly spectacular, and the Bruins depth and star power is better–came to fruition. One game doesn’t a narrative make, but there is a lot more the Blues have to solve while the Bruins have just been doing what they have been and will only need to continue to do so. This was a complete ass-kicking for at least two-thirds of the game.

Let’s do some bullets.

-You should never take anything Barry Melrose says seriously, and the biggest clue that ESPN doesn’t care about hockey is that he remains in their employ even though I don’t think he’s watched a game since 2001 (including his coaching stint), but he wasn’t the only one who was championing this series as something of a “return.” That’s only based on what the Blues only kind of are and the reputation the Bruins have even though they haven’t been that for years. But there was this idea both teams are big and bad and the idea of a lot of fast and nippy wingers with skill aren’t the way forward and that this was TRUE HOCKEY. Horseshit.

The Blues simply couldn’t handle the Bruins forecheck, because their defense is so goddamn slow. Their only d-man who can move is Vinnie Bag Of Donuts Dunn, and he’s hurt. There were turnovers galore early, which then had the Blues defense backing up at their line when the Bruins were carrying in trying to cheat to win the races down low later. Which only gave the speed the Bruins have at forward more space to the outside to carry the puck in and create, which led to the Blues never having the puck and having tire treads to remove from their chests this morning.

But the real differences in these teams, and one we’ll get to later today that the Hawks should be paying particular attention to, is the mobility of the Bruins defense. Chara was awful, the rest were very much not. McAvoy, Krug, Grzelcyk (especially), and Clifton are all at least mobile enough to open up a passing lane for themselves to evade the Blues forecheck, which has been pretty furious at times this spring. Or they just outright get away from them, and even when the Bruins are attacking the St. Lous line three-on-three or four-on-three, the Blues defense is backing up. You want to know why the Bruins dominate possession all season even beyond the Bergeron line? There you go.

-I saw a good portion of Blues Twitter saying, “We’ll be all right when we stop taking penalties.’ Because that’s a thing that’s happened the past 30 years.

–Jordan Binnington made over 30 saves, only the third time he’s had to do so this playoff run. But if the Bruins are going to toss 35 shots at him a night, this is what the Blues are going to get. 34 out of 37 saves is good. It’s not great, and that’s mostly what Binnington has done. It’ll have to be better than what the Bruins will get on the other side.

-The only unit for the Blues that wasn’t covered in their own piss by the end of the night was their top line of Schwartz-Schenn-Tarasenko, which got their two goals as well. The adjustment I would expect the Bruins to make is to get Chara out of that matchup, though it’s a risk to try it with Brandon Carlo and Torey Krug, given the latter’s defensive balloon-handedness. But Chara simply isn’t up to it and that much was clear, and you don’t want to be jumbling your pairs at this point.

For the Blues, playing this way of trying to trade forechecks is going to get them this. Their defense will get snowed in, the Bruins will get away from theirs, and they’ll spend the night chasing. It would seem their only option for Game 2 is to go Trotz and trap this up and make McAvoy and Krug weave through it. That would allow their slow d-men to back up at their line while still being protected and not leaving acres to the outside. Then they might have a chance of retrieving pucks and moving it along without getting clobbered. The more the Blues try to speed this up the more they’re going to get exposed.

Let’s hope for that, so we don’t have to be here long. 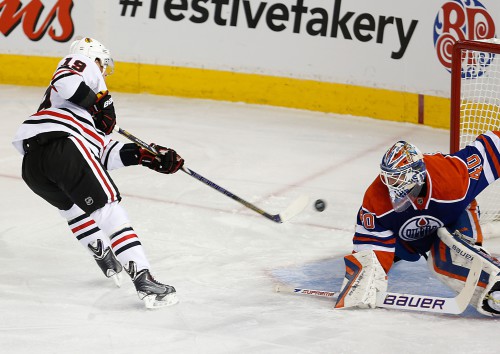 We still fear games against the Oilers after the trauma of the ’11-’12 season, especially the carnival ride of the games at Rexall Place that season, but it hasn’t really been the case the past two season. Oh sure, the Oil got one last year at the UC in a total clown college of a game. But other than that they’ve been batting practice fastballs for the Hawks. And you know pretty much whether it will be or not by the 1st period. As soon as Jonathan Toews arrogantly deposited his shorty in the 1st, you knew how tonight would go.

Let’s not wait around.