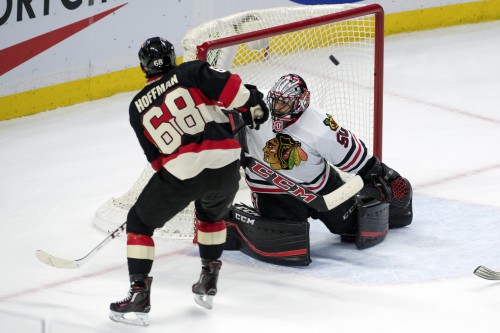 I’m sure some air raid sirens are going off in the hinterlands of Hawk-dom, less than a week after everyone was beaming from a 3-1-2 Circus Trip. It’s now three “losses” in a row, even though the Hawks got points in two of them. But this wasn’t like the Kings or Wild, where the Hawks deserved to either get only a point or lose outright. They played well after the 1st, there were signs of life from Toews and Hossa, and yet more brilliance from Kane and The Sons Of Rasputin. This time however the penalty kill didn’t come through as it has, putting the Hawks up against it. And when you give Karlsson a look in overtime, no matter how much he doesn’t like the format, you’re pretty much asking for it.