Other than Mookie Betts, it wasn’t just the Cubs’ winter that hinged on Kris Bryant. It felt like half of baseball or more was waiting to see where he’d go and what they’d do in response. Or every move that was made viewed through the prism of whether or not that would enlarge or shrink the market for him. And then nothing happened. I’d like to believe that Theo Epstein has been slow-playing his ownership the whole time, never intending to make a deal while guising it as just not finding one that’s appropriate. Because there isn’t one that’s appropriate. You can’t get equal value for a player like Bryant, and the Betts trade proves it. Unless your real goal is to just lower payroll, which was the Red Sox’s. And was pretty much the Cubs’. But thankfully, they couldn’t bring themselves to do it, at least for a few months and probably a year. And maybe not at all.

So we have to endure the torture of having the third-best player in MLB since making his debut stuck on the team. The horror, the horror…

It’s funny, and don’t take this as me being anti-Javy because I’m the farthest thing from it. But all those people who had either reconciled a Bryant trade or were actively pushing for it–and they’re the same people who will tell you they’ve definitely heard of and seen the band you simply made up to mock them without them knowing it–will tell you last year clinched it because Bryant was hurt and not very good and Baez is the one the Cubs have to extend. And that 4.8 WAR mark is one Baez has surpassed…once. And it was Bryant’s second-worst season out of five. I don’t think people pay enough attention.

Bryant definitely was carrying something for the second half of the season, and still put up numbers that most players would cut off their mom’s pinky for. It’s not even a baseline for him. IT COULD NOT BE ANY SIMPLER, LUANNE.

August was the rough one, where clearly something went off physically, as Bryant’s hard-contact rate was only 25% and his line-drive rate just 12%. But on the spotted times he could actually get out there in September, be bashed the ever-loving shit out of the ball to the tune of a 52% hard-contact rate, 34% line-drive rate, and a 145 wRC+. So the idea that he was somehow part of the Cubs collapse when he was healthy is fucking laughable.

YES! YES! YES!: Bryant just needs to stay healthy, or at least have his medical staff properly diagnose when something is wrong and in a timely fashion. It felt like the past two years Bryant has just soldiered on through things they couldn’t identify, and it didn’t help matters much. When healthy, you don’t need to look much farther than last season’s first four months, when he had 21 homers, and was slashing .291/.394/.541, and that’s with carrying a rough first five weeks of the season due to a .263 BABIP, 80 points below his career average.

So for the optimum outcome, Kris Bryant just needs to be Kris Bryant. There isn’t some combination of events that have to come together for him to succeed. There isn’t something he needs to work on or adjust to. He just needs to be healthy and breathing. The only quibble, if you have to have one, is his defensive metrics have slipped since 2016. Now maybe you attribute this to him being 6-5 and simply not as mobile as he ages, and that could very well be true. Having knee problems wasn’t ideal, either. It’s worth keeping an eye on, but he seems too good of an athlete to just be a bad defender now. It’s been two years under water when it comes to Defensive Runs, so it’s not quite a trend yet but another year of it would make it so.

YOU’RE A B+ PLAYER: The opposite of above, where health is again an issue and he’s merely really good instead of a team-carrier, and all that will do to those who really liked that band where the dude plays a theremin with a cat (hat tip Kyle Kinane) is lower his value in a trade with only one year of control left and you can have the bucket of sink scum and pigeon shit the BoSox got for Betts. Yippee.

If we need to go deeper than that, Bryant struggled a bit on fastballs high in the zone last year. And if that continues he does become an easier out, though it was clearly something he had adjusted his stance and swing this spring to deal with: 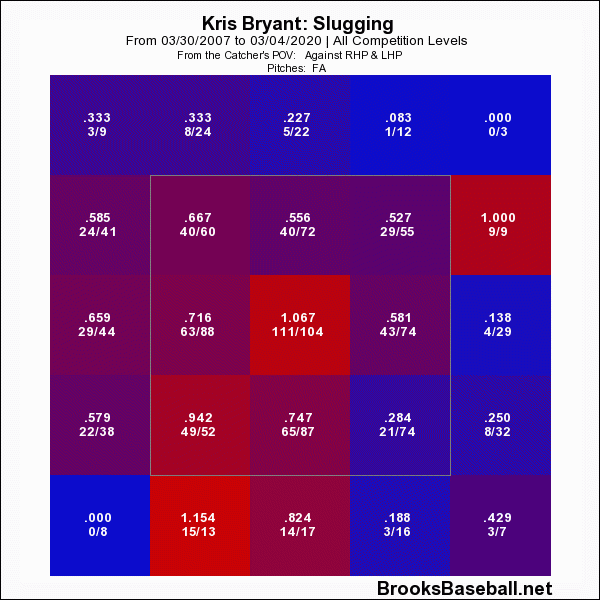 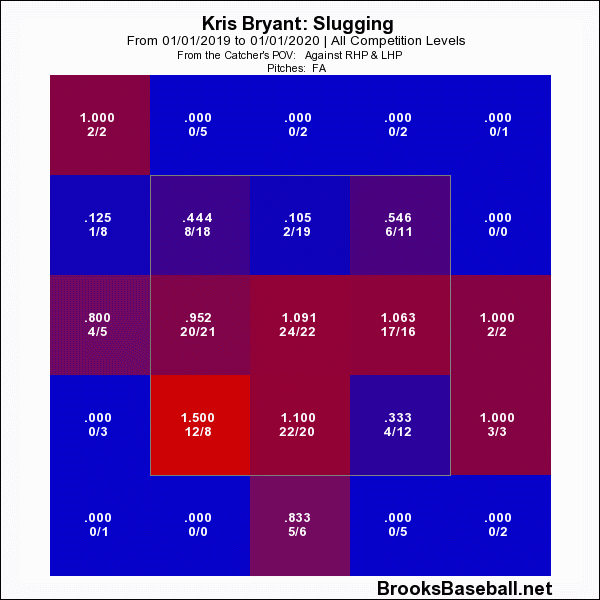 It wasn’t that much better before August 1st either, so it’s tricky to blame it on his knee problem. You don’t want Bryant having to cheat to get up to high fastballs, because of what that leads to. One would expect this is the first area opposing pitchers go to this season.

Dragon Or Fickle?: I would like to tell you that after a winter of trade rumors and the grievance and listening to some experts try and disparage what he’s meant to this team and city, Bryant would be leading the Fuck You World Tour. But he’s just not that guy. When he says he’s over it and it generally doesn’t bother him, you tend to believe it. That doesn’t mean this isn’t an ultra-competitive guy, you’d have to be to get to where he’s gotten, but he’s different.

I would simply expect a Kris Bryant season, but a healthy one. Which means there will be a month or two where he simply carries this team and keeps them in the race by himself if not on top. I would expect him to beat the projections and top a 5-WAR season, and maybe with a little luck get himself into the MVP discussion again. It’s his standard, and not enough appreciate that.