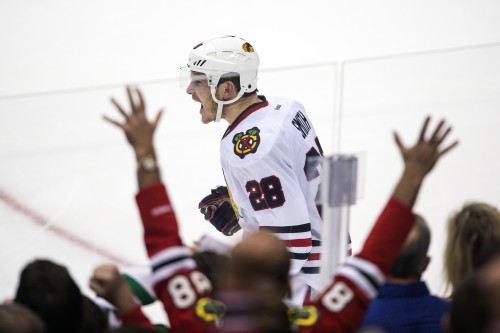 With the Hawks doing a rare Friday-Saturday night double, we’re going to combine our wrap and preview on the pivot. Hopefully we don’t pull a muscle.

There’s not too much to say about last night’s “win.” Though the Hawks have gotten smacked by Colorado and Nashville recently, yesterday’s game certainly felt like the sloppiest they’ve played. I waited for the Hawks to be able to connect on three straight passes at any point. I’m still waiting. Two seemed a struggle. Luckily for the Hawks, the Stars weren’t any better. Everything was kind of frantic and chances basically came out of whatever team was able to rugby-scrum their way toward the other team’s net. This game would have caused Herb Brooks to break out his “monkeys humping a football” line.

The extended shootout was yet another example of what a farce this thing is. No one paid to watch Ben Smith and Jordie Benn settle this contest in a shootout. The longer it goes the more random it gets, and the fact that this extra point might matter down the line is simply ridiculous (even if it did go the Hawks way). Think about it: the Hawks could win the division or get top seed in the conference because Ben Smith scored in the 11th round of a shootout. What a joke.

-Though they were on the ice for the goal against, Nick Leddy and Sheldon Brookbank were your Corsi leaders at +14 and +13 respectively. Quite simply, they had their way with Peverly’s line most of the night. And they weren’t granted a bevy of offensive zone starts, as they were evenly split in all three zones. As for the goal against, Leddy’s pass need a bit more touch to Toews but Toews also probably shouldn’t kick it into the corner with everyone headed the other way. Crow wasn’t wrong to go and play it, but he was to stay out there and not play it quicker. Whatever. No harm done.

-Pirri played less than 10 minutes. Handzus only played 12. I’m not even sure I know what’s going on any more.

-Since Kris Versteeg scored against the Sharks, has he done anything?

-Even on a night when everyone was pretty bad, Brent Seabrook’s bad stands out. That’s impressive. You can go ahead and schedule a trip to somewhere warm in February, Seabs. And yes, I know Sochi is actually pretty warm but obviously that’s not what I’m saying.

-Marcus Kruger was once again above water at the dot. And maybe because of that, once again Kruger’s line started and exorbitant amount of shifts in the defensive zone (78%). It appears for now that Q is using three scoring lines and his 4th line as a checking line. But you know, I don’t know how long you can get away with starting your 4th line this much in its own end on the road. But I guess if they survive Seguin and Benn doing so…

THEIR HAIR WAS PERFECT: Five For Howling

Usually you’d be afraid that the last game of a long road trip like this and the second of a back-to-back would cause the Hawks to just look at their watch all game waiting for the flight home. But with the Hawks throwing in something of a clunker last night that they got away with, I actually worry about that less now.

Since we last saw Phoenix here at the UC they’ve gone 2-2-1, losing to the Ducks, Avs (OT) and Predators. Last out they won in Minnesota, which is kind of a story because the Coyotes haven’t been very good on the road but dominant at home. They’re 9-1-2 at Westgate, and that’s with losing their last two there.

Annoyingly, Radim Vrbata is on fire for Phoenix, with seven points in his last five games. He’s taking Martin Hanzal (Hanzal? Hanzal.) with him, as he’s got the same streak going. They lead the Yotes in scoring, and I guess now that’s what Kruger’s line will see the most of. Considering the difference in size between Kruger and Hanzal, that could be an issue.

Opposite of annoyingly, Mike Smith has cooled off. He hasn’t given up less than three goals in four starts since giving up four to the Hawks, and he hasn’t been seeing the obscene shot totals that he was earlier in the month. None of those four starts saw him receive more than 30 shots against, which is a far cry from the 52 the Hawks flung at him last time.

The Yotes are just weird. They have this reputation of a stout defensive team, but they’re just not. At least not right now. They give up a ton of shots, the surrender a fair amount of goals. Smith bails them out when they win. But what they do have are a bunch of speedy little forwards who can turn a crack into a full-out massive breach in a blink if you turn the puck over or make a mistake. That’s where their offense stems from, the speed at which they turn it around on you when given an opening. But if you don’t give them too many, they struggle to stay with you.

I would imagine Antti Raanta will get his second start, but as always that’s send out of hope than expectation. It’s a busy December for the Hawks. Hopefully they’re not looking too longingly at the bus tonight.