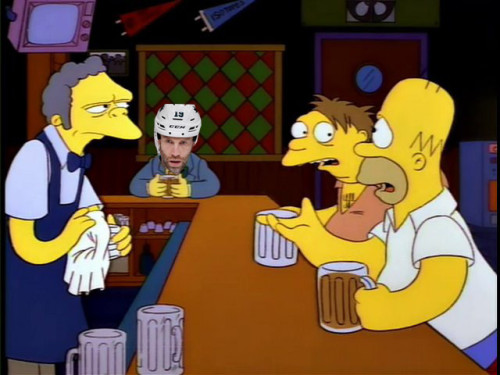 As everyone else in the world falls all over themselves to tell you how awesome Jaromir “I Wear These Pants To Accentuate My Bulge” Jagr is, or the remnants of the eight-year long Teemu Selanne goodbye party are still to be cleared, ask yourself why people don’t feel the same about Joe Thornton? We mean other than when he’s talking about pulling out his cock and stroking it after scoring four goals in a game.

Thornton is about to have his 16th season of 60+ points in the last 17, and the only reason it isn’t 17 straight is he only played 23 games in ‘03-’04 after busting his shoulder. Even Jagr can’t boast that, though he’s seven years older. He is in the top 30 in all-time scoring, could crack the top 20 or even 15 next year and certainly will if he plays another two or three years. Considering he’s still producing, there’s no reason he shouldn’t.

Perhaps it’s this supposed “playoff loser” label that Thornton has had collared to him since he arrived in San Jose. Overall, Thornton has 100 points in 132 playoff games. With the Sharks only, it’s 82 points in 97 games. Thornton’s scoring drops from 2.5 points-per-60 at evens in the regular season to 1.8 in the playoffs. But he’s hardly the only one that happens to. And by the way, that 1.8 mark in the playoffs is higher than playoff hero Jonathan Toews’s 1.7 career mark. It’s higher than Passy Twin’s. It’s the equal to Kopitar’s. Same as Patrice Bergeron’s too. And higher than Nicklas Backstrom’s. Could it be that Thornton hasn’t been the problem in San Jose? Gee…

In the past five seasons, when scoring has dropped off of a cliff, only 14 seasons of 60+ points have been recorded by someone 36 or older. Names like Martin St. Louis, Jarome Iginla, and of course Jagr and Selanne are on there. Is Thornton viewed with the same gooey gloss as any of them? It can’t all be Cups, because Iginla doesn’t have one and Jagr hasn’t won one without riding shotgun for Mario. If Thornton were to break 60+ points again next year, and there’s no reason to think he won’t, that’s only been done nine times in the past five years by players 37 or older.

Perhaps it’s stil the stink from the trashing any player traded out of Boston gets. Perhaps it’s being the face of Sharks’ failures, the biggest star on a team that never quite made it. Patrick Marleau is a victim of that too. But it wasn’t Thornton or Marleau who melted down in the crease against the Hawks in ‘10 in net. Thornton was the epicenter of the storm when the Sharks blew a 3-0 lead, it even got him stripped of the captaincy, but Antti Niemi was the real culprit that series. Or the lack of a d-man beyond Marc-Eduoard Vlasic.

We’ve stated it before, but the list of bums that Thornton has dragged to dominant scoring seasons is impressive. Anson Carter, Jonahtan Cheechoo, Brent Burns as a forward, Sergei Samsonov, Brian Rolston, Glenn Murray, Mike Knuble, Milan Michalek, Ryane Clowe and his fucking superfluous “e,” and one or two others had career seasons on Thornton’s wing. Maybe it’s time to show him the love too?