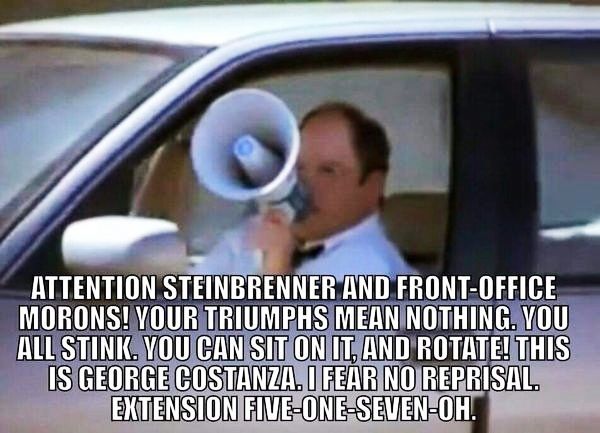 When I volunteered to write my first ever Sox recap for FFUD, I assumed the title would be something along the lines of: “Sox Get Nuked From Orbit By Judge, Stanton, and Sanchez,” and not what I actually wrote above.  Granted, the Yankees were almost hilariously undermanned for this series but by crackey I’m taking it.  The series itself ran the gamut of major Sox storylines this season, from Moncada’s continued elevation of the ball to Eloy finally smoking two out of the park, to Rodon finding the placement of his slider.  It wasn’t a perfect series win by any means, but at this point we can’t be too picky.

-Firstly, we get to talk about ELOY!  Not only did he finally mash his first tater of the season to dead center off a 92 mph rising fastball from JA Happ, but then he followed it up with a towering blast to left center field that was estimated at 445 feet.  Total for the series he went 3-9, bringing his average up to .288 for the season.  Also important were the two professional-ass walks he took in the rubber match which helped Tim Anderson rack up a bunch of RBIs when he hit his series clinching granny today.

-Yoan Moncada continues to just do work at the plate, going 4-11 with a couple of runs and RBIs.  More importantly, he only struck out once the entire series bringing his K-rate down to 24%. He’s seeing more pitches so far, and the eye test continues to be very positive.  Tim Anderson didn’t have many hits this series, but he made one of them count, taking an 0-1 cutter off Masa Tanaka opposite field for his first career grand slam.  He’s now batting a cool .429 this season with an obscene 1.093 OPS.  This is clearly sustainable throughout an entire season, and Tim should begin clearing space on his mantle for his first ever hitting title.

-While I expected this team to run more, I did not expect to be typing the words “James McCann stole a base,” which he did.  Also, professional speed demon Jose Abreu managed to swipe two bags this Sunday on Kyle Higashioka, who now must be treated for PTSD after allowing five Sox stolen bases today.

-Carlos Rodon started shaky today, but pulled a full Verlander by getting better and better each inning he was out there.  By the 5th and 6th innings he had complete feel for his slider, and was placing it on the outside 1/8th of the plate at will.  The fact that it took him until the 5th and 6th inning to get that feel is concerning, but I’ll take it for the time being.

-Ivan Nova deserved a better fate than what he got Saturday after Yolmer continued his shaky play at the cornerstone.  He booted a tailor made double play in the 7th inning that would’ve allowed Nova to escape the inning with no earned runs and a no-decision.  Instead he got the loss and the Sox were flummoxed by a returning CC Sabathia.  Such is baseball.

-Lucas Giolito was back to his old tricks again in the first game, walking 4 in 5 innings while somehow managing to throw 100+ pitches, only 62 of which were for strikes.  Granted the weather looked miserable from my seat at the bar in Vegas, drinking some cocktail made out of gin and smoke, but if he’s going to have a place in the rebuild going forward then its time for him to prove it by looking more like the version we saw in his start against the Royals.

-Next up brings our old friends the Royals back into town, where Ervin Santana will look to bring his ERA below 10. Onwards!

-On a side note, I’d like to thank Sam for letting me dip my toe into the Sports Blogging pool.  I’ve been following his stuff since he sold programs outside the UC ages ago and I’m stoked to be adding whatever I can to this awesome site here.  Cheers!