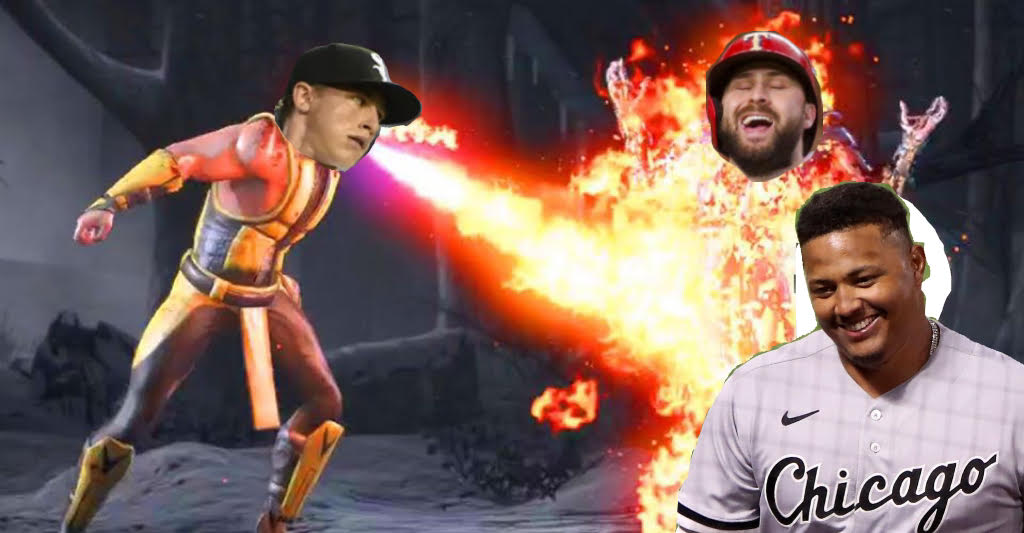 Every year around this time we as Sox fans start worrying that the offense isn’t going to live up to expectations, and almost every year when the calendar is about to flip from April to May the bats wake up in a barrage of offense and we all collectively slap our foreheads for being so silly. This year is no different, as the Sox offense exploded for 36 hits and 19 runs across this 3 game set against the Rangers. More interestingly out of character is the way the team knocked in those runs.

Game one was the kind of hitting display that makes older fans turgid, with the Sox banging out 16 hits with only a single dinger from Moncada accounting for any of the 9 runs. Game 2 was the classic “Pitcher’s Duel,” with Keuchel and Kyle Gibson locked into a death stare, and the first one to blink was actually Jose Trevino, as he let a passed ball give the Sox the lead 1-0 in the 6th. Madrigal would later walk the Sox off in the 9th with a double over Joey Gallo’s head. The 3rd game was a mix of the previous two, with Jose hitting a two run bomb to kick things off, and Michael Kopech mowing Rangers hitters down with seemingly little effort. It was quite the sight to behold, and with the warmest weather of the season forecast for this week, combined with the 3rd worst team ERA coming to town shit could get wild.

-I’ve watched a lot of Sox pitching prospects come up and succeed in my time following the team, and there’s never been one who’s raw pitching talent has been on the level of where Michael Kopech currently sits. His stuff is just beyond filthy. Just look at the movement his 97 mph fastball has on this punchout pitch to Joey Gallo:

I understand the need to manage his innings this year and completely support it, but seeing shit like this makes watching Dylan Cease starts that much more difficult.

-Speaking of Cease, nothing has changed since his last go around. He only made it through 3.1 innings, and threw an unholy amount of pitches in the 1st inning, ultimately totaling 86 in that span. His underlying spin rate metrics are ranked quite highly according to Statcast, but he just doesn’t get the outs and is always less than economical about the way he throws his pitches. It’s kind of a mystery, and I’m running out of patience for him to solve it. I’d suggest him being moved to an opener type scenario, but you have to be able to make it once through the rotation to be effective in that scenario.

-Yermin Mercedes continues to be hilariously good at hitting the baseball, going 6-12 in the series with two walks. There’s not much else to say about him, other than the fact that he’s taken the sting out of losing Eloy for 5 months. The Sox are going to have to have him work in the field somewhere, because once they head to Cincinnati next month, they’re gonna need his bat in the lineup. Also, I’d like to try his burger.

-Nick Madrigal is going to annoy the fuck out of opposing teams and their fanbases for the next millennia or so. He came up with two huge hits this series, walking the team off with a double over Gallo’s head in game 2 and a bases clearing triple in the gap in game 3. He’s a pretty divisive figure even amongst Sox fans, but once he gets to the point where he plays more consistent defense I feel he’s going to be a fixture in this lineup for a long time.

-Liam Hendriks screaming “FUCK ME” after giving up a game tying dinger in the top of the 9th in game two was hilariously audible on the broadcast, and Stone had to cover with a “he’s not very happy” comment. I get being pissed at yourself, but Willie Calhoun had no business tomahawking that nipples-high fastball out of the park. 99 times out of 100 that’s a swinging strike. That being said, Hendriks still has given up too many long balls thus far in the season and that bears watching as we go forward.

-Lucas Giolito apparently cut his middle finger trying to open a bottle of water which wasn’t a twist-off. I don’t know what brand of water seals their product in with razor blades, but I’m sure I can’t afford it. At any rate, seems like no cause for alarm with Lucas and he should be back on the mound for the series opener Tuesday night against Detroilet.

-You can SEE Moncada, Abreu and Luis Robert heating up at the plate. All 3 had hits that would’ve been dingers a month from now in warmer weather, and it’s only a matter of time before the middle of that Sox order is giving opposing pitchers night sweats. Love to see it.

-Codi Heuer is turning out to be what everyone assumed Evan Marshall and Aaron Bummer were going to be: the shut down reliever TLR turns to with the game on the line in the 7th and 8th. Awesome stuff.

-The Sox now sit a game and a half behind the Royals (yes, THOSE Royals) for 1st in the Central Division, while the Twins just lost a series to the Pittsburgh Pirates (LOL). Nobody out there believes that this is how it’s gonna go for the rest of the season, but I’m still gonna enjoy the Twins eating shit in the basement for a few more weeks.

-Next up is the Detroit Tigers, who managed to get totally cock punched by the aforementioned Royals this past weekend. They have the 3rd worst team ERA in the league so far, and the weather is supposed to be windy and warm. Strap in, because it looks like the Sox are going streaking.