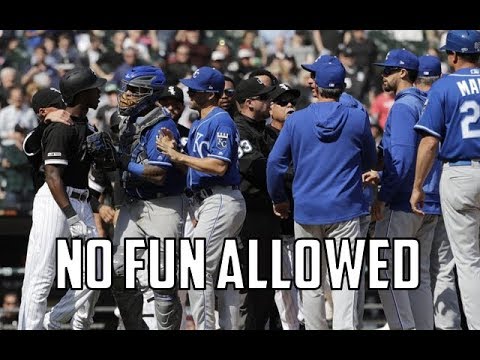 Fresh off an idiotic loss to the Reds on Wednesday, the Sox head Southwest to the land of BBQ and Patrick Mahomes for a three game set against the Royals. It seems that the Sox are arriving in KC at an opportune time, as up until about a week ago the Royals sat atop the AL Central Division. One 5 game losing streak later, and now they’re a half game behind the Sox, and Cleveland has jumped everyone into first place.

In reality, none of this should be surprising. The Royals hot start was really nothing more than a mirage of great BABIP and a bullpen punching WAY above it’s weight. Now that statistics have come home to roost, runs have been in short supply and the pen has been getting it’s dick knocked in the dirt for a week.

All that isn’t to say the Royals lineup isn’t dangerous, because there certainly are some deadly spots in it. Sal Perez is still here, and having a resurgent year so far with 7 home runs on the campaign. Carlos Santana is doing his best Yasmani Grandal impression but with a better batting average. He’s currently slashing a very nice .250/.364/.818 on the year with 6 home runs and 21 RBI. He’s also walked as many times as he’s struck out (20), and somehow stolen a base. I can only imagine the shame of Wilson Ramos as he realized that figure slowly shambling between 1st and 2nd was not a mirage and actually Santana stealing his first base in over 2 years.

Whit Merrifield is still here, a cautionary tale still burning through the best years of his career with a perpetually rebuilding team, as is former Cubs project Jorge Soler, who’s power numbers are down precipitously from the last few seasons. Part of that is his current run of bad luck. His BABIP and wOBA are both around .260, while his actual average is hovering at .195. His hard hit percentage is the highest it’s been in his career at 58%, so he appears to be pretty snakebit right now. Here’s hoping that continues, because when he’s connecting the ball tends to go a long way.

As for the Royals starting pitching, the Sox manage to avoid their “ace,” Danny Duffy, who’s currently enjoying something of a renaissance this year. What the Sox get instead is their old enemy Brad Keller. The last time out, the Sox pummeled Keller for 4 runs in 3 innings on the way to a complete game shutout for Lance Lynn. This time around he gets to face Hard Carl and his 0.72 ERA, while Lynn draws the assignment of the Royals top pitching prospect in Daniel Lynch. Saturday will be the second career start for Lynch, who was the Royals first pick in 2018 (and 4th overall). He’s essentially a 3 pitch starter at this point in his career, with a plus fastball and slider with a changeup that he sprinkles in. The one thing he’s got going against him in this series is that he’s a lefty, though without Luis Robert and Eloy in the lineup the Sox aren’t nearly the Nightmare Fuel for lefties they were last season.

For the White Sox, after their split with the Reds a few days ago they’re 6-4 in the last 10 games. Still looking for ways to fill in the gaping hole left behind by the injury to Luis Robert, Rick Hahn did an admirable job signing Brian Goodwin to a minor league deal.  Goodwin in 2019 was a solid contributor for a mostly punchless Angels squad, slashing .262/.326/.796 in 413 plate appearances with 17 dingers. He played solid defense at all outfield positions, and was a 1.8 WAR player. He’ll spend a week or so at Charlotte getting ramped up for the season, but once he arrives he should provide an excellent stopgap for Hahn until he can swing a bigger deal.

Tim Anderson gets to face his nemesis Keller on Friday night for the first time this season since he was out with a hamstring injury the last series. While he only has a career average of .118 against Keller with the one glorious home run, he’s been pretty hot the last 15 games with a .313/.343/.827 slash line. The fact that he has his OBP higher than his average is a great sign for how Timmy is seeing the ball. Sure would like to have him see a hanger from Keller so he can park that shit in their stupid fountain.

As I mentioned above, the Sox are catching the Royals at exactly the right time. Their pitching has been exposed, and most of their hitting has gone cold. The Sox starters seem to have turned it around, and they line up well against KC this weekend. The table is set for a series win, and they’ll need it to keep up with a suddenly scorching hot Cleveland squad. Hopefully the team can put the shenanigans of Wednesday afternoon in the rearview mirror and punch down on a Royals club that is reeling.