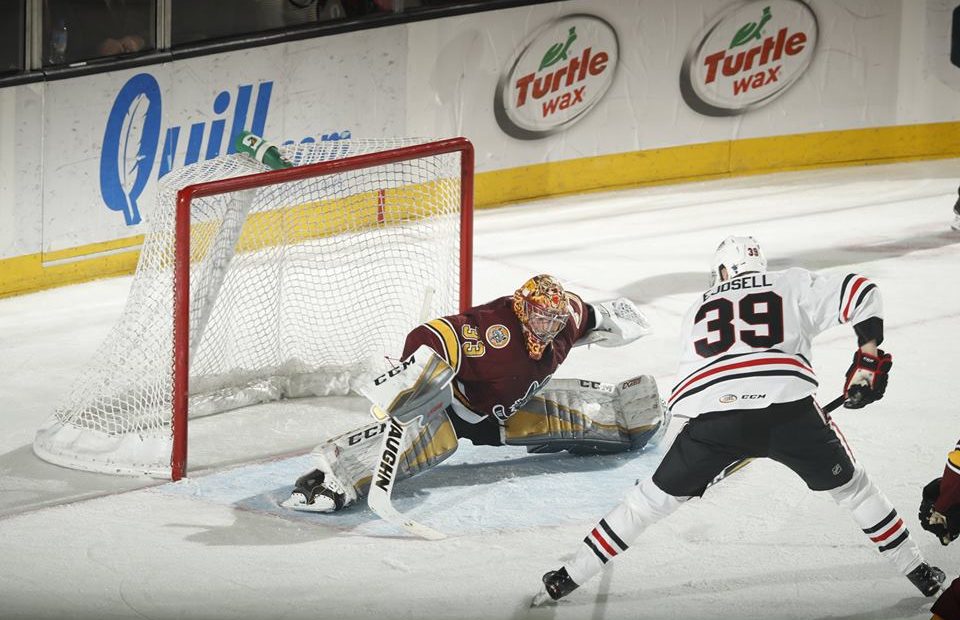 The ‘Bago County Flying Piglets earned themselves a spot in the second round of the Calder Cup Playoffs early this morning. The Blackhawks AHL affiliate in Rockford put in the extra effort at Allstate Arena to sweep the Chicago Wolves.

The IceHogs brought the few fans who stuck it out a 4-3 triple overtime triumph, ending their best-of-five series with Chicago in three games. Rockford will have some time to recharge, as their opponent won’t be decided until Monday night.

I’ll be here with my regular spot on Monday with a look at both potential opponents, but here’s how things played out in Game 3:

Chicago came out as hard as you would expect a team facing elimination would, taking a 2-0 lead by the midpoint of regulation. Most of the tomfoolery of the previous two games was kept in check; neither team seemed to want to spend time killing macho penalties.

It was, however, on the power play where Rockford sparked a run that put it up 3-2 by the second intermission. It all happened in a 4:04 span shortly after Keegan Kolesar gave the Wolves a 2-0 advantage.

Cody Franson one-timed a Chris DiDomenico pass into an opening left by Chicago goalie Max Lagace at 9:50 of the second period. A little over three minutes later, DiDomenico took a drop pass from Andreas Martinsen at the top of the right circle and tied the contest.

The veteran forward was also the catalyst for the third Rockford goal, nabbing the puck in neutral ice and starting a rush into Wolves territory. From DiDomenico to Anthony Louis at the right circle, the puck then was sent to Victor Ejdsell coming across the goal mouth. A backhander past Lagace gave the Hogs a one-goal lead into the second intermission.

Chicago got back to even ground early in the third period when Wade Megan made a terrific second effort to regain possession of his missed shot, come around the net and stuff a wraparound attempt just over the goal line. At that point, both Lagace and Hogs starter Collin Delia put the back of their respective nets on lockdown.

Delia stopped 30 shots in the extra sessions; Lagace withstood 34 on the way to 72 saves for the evening/morning. Chicago looked to have won the contest early in the first overtime on a delayed penalty. A quick whistle (which did not seem warranted as the Hogs did not seem to gain control of the puck) negated that goal and the teams played on…and on…and on…

The game-winner came on the man advantage; Ejdsell took a pass from Louis and fired past Lagace to end the proceedings at 17:22 of the third overtime. Fittingly, Ejdsell’s two-goal performance earned him the game’s first star honors. Lagace had to settle for second star, while DiDomenico (1 G, 2 A) was third star.

Rockford now sits in anticipation of Monday night’s Game 5 between Grand Rapids and Manitoba. This is the third time in the Hogs AHL history that the team has made it out of the opening round. The power play went 7-18 against Chicago and Delia proved to be quite hardy in net. How far can that combination go in the tournament? We’ll see, starting with a preview of the second-round series on Monday.