Pigs In Zen: It's A Process 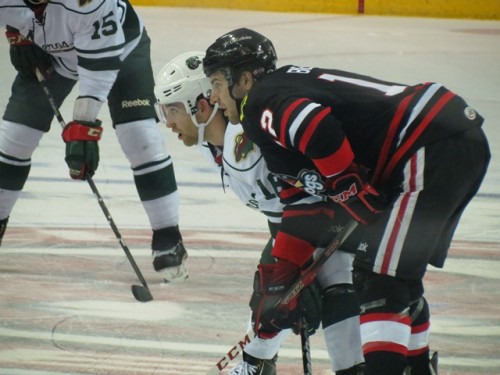 The IceHogs carried momentum with them throughout the end of week 18 after a big shootout win earlier in the week against the Texas Stars on February 5th. Two more games were on tap for the boys from RockVegas as they wrapped up their four game road trip and returned to the BMO Harris Bank Center.

First up for the IceHogs was a trip to Carver Arena to take on the Peoria Rivermen on Friday, February 8th; the Hogs hadn’t seen that building since the third game of the season, which was on October 19th. The Hogs fought from behind and were able to beat the Rivs 4-2 with goals from Jeremy Morin, Jimmy Hayes, two from Kyle Beach, and 26 saves by goaltender Henrik Karlsson. Terry Broadhurst chipped in with a two assist performance. The win was the IceHogs’ second in a row and was the first time the Hogs put together back-to-back wins since January 12th in Milwaukee and January 18th against this same Rivs team.

The Hogs couldn’t keep following their winning path though. On Saturday, February 9th, they were shutout 2-0 by Darcy Kuemper and the Houston Aeros in the IceHogs’ first game back in their own barn since January 26th. Henrik Karlsson was in net again for Rockford and the defense did a great job of helping him throughout the contest as they got to loose pucks in the crease and cleared them many times before Houston could pounce; Karlsson also made some good saves, but didn’t have answers for Johan Larsson’s tally with eight seconds left in the first and David McIntyre’s third period marker with less than five minutes to go.

-The line of Terry Broadhurst–Jimmy Hayes–Jeremy Morin has really been clicking as of late. In the last three games (including the shutout loss to Houston), the line has combined for 10 points (5G, 5 A); Broadhurst has 4 points (1 G, 3 A), Hayes has 2 goals, and Morin has 4 points (2 G, 2 A).

–Henrik Karlsson could use some work on his rebound control. It’s not terrible, but on Saturday, he seemed to give up many rebounds into dangerous scoring areas. If the Rockford defense hadn’t been on top of its game, the score might have been very different than 2-0.

–Philippe Paradis left Saturday’s game during the second period with an assumed injury.

-Injury update:  Ben Smith is still out with his left hand injury and Dylan Olsen sat out both games this weekend with an injury, according to Mike Peck on the radio broadcast. There hasn’t been any word on what’s wrong with Olsen. Wade Brookbank was the lone healthy scratch in both contests.

-For grins and giggles, here’s what the lines and D pairs looked like on Saturday night:

-The IceHogs currently have a record of 22-24-1-1 (46 points). This puts them in a tie for fourth place in the Midwest Division with the Peoria Rivermen, who have one game in-hand. In the Western Conference standings, the Hogs are in a three-way tie for 12th place with the Rivs and the San Antonio Rampage. Rockford is 8 points out of a playoff spot. **Before Wednesday’s games had gone final.

-IceHogs forward Ben Smith was on the Stone and Double T Show on Tuesday morning on WXRX in Rockford. Check it out.