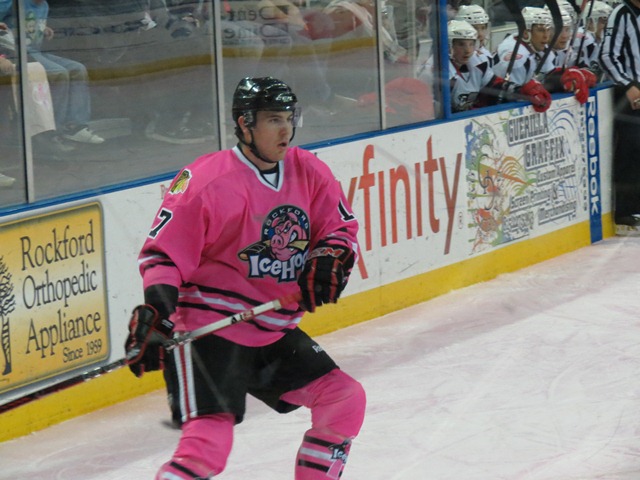 The results on the scoreboard for week 15 of the AHL season for the Rockford IceHogs were overshadowed by a fight night on Saturday. And not just any fight night. This fight night was a full out, bench-clearing brawl, which is the second (and a half) bench-clearing brawl for the IceHogs in the last calendar year. (They had a bench-clearing brawl in Milwaukee on April 1, 2012 and on November 3, 2012, Andrew Shaw and Wade Brookbank left the bench to join an altercation against the Lake Erie Monsters).

Starting with Saturday’s tilt is necessary for obvious reasons. At 11:58 of the second period of Rockford’s game with the Grand Rapids Griffins, Kyle Beach tried to fight Griffins star forward Riley Sheahan off of a faceoff, and Sheahan turtled. Further back in the Grand Rapids zone, Wade Brookbank started a tussle with someone and, to put it bluntly, all hell broke loose. If you haven’t seen the video of the brawl yet, check it out here. The best part of it all was IceHogs goaltender Carter Hutton beating the crap out of Griffins netminder Petr Mrazek.

Anyway, there were three Grand Rapids players that left the bench first before any of the Rockford guys left their bench. Unfortunately for Rockford, Rob Flick was given the only misconduct for leaving the bench to join the altercation. The Hogs ended up having 8 guys ejected from the game and the Griffins had 5 guys ejected. Rockford essentially played a period and a half of hockey with 11 skaters and Grand Rapids played with 12.

Not only was that whole game chippy, but add in the bench-clearing brawl and a total of 17 goals, and it just wasn’t pretty. Grand Rapids won that contest 11-6. Credit needs to be given to the IceHogs though. Once they were playing with 11 skaters, they kept their heads down and kept digging, trying to mount a valiant comeback. They came semi-close as they recorded a shorthanded goal by Jimmy Hayes, a power play goal by Ben Youds, and an even strength goal by Brandon Pirri, but Grand Rapids kept pulling away every time.

To see the insane boxscore, take a look here, courtesy of the AHL.

That was the second game of week 15. The first game of week 15 was on Friday, January 18th as Rockford welcomed the Peoria Rivermen in to the BMO Harris Bank Center. Rockford took that game 3-1 as Carter Hutton made 31 saves and backstopped them to the win. Up front, the IceHogs were led by Martin St. Pierre, who recorded his 15th goal of the season, and Brandon Pirri, who tallied two goals in this contest. Philippe Paradis also chipped in with two assists as he had a solid game for Rockford.

The IceHogs began week 16 with a Monday afternoon game against the Texas Stars on January 21st. They got out to a roaring start with tallies from Jeremy Morin and Jimmy Hayes in the first period, and a breakaway goal from Hayes to start the second period. But, Rockford gave up 6 unanswered goals to the Stars and dropped the contest 6-3. Kent Simpson was in net for Rockford as Carter Hutton sat this game out with a hand injury; Alec Richards backed-up Simpson.

To some, it may look like the IceHogs lost this game because they had a goalie from Toledo in the crease, but that was far from the case. Simpson had a solid outing and if it weren’t for him, the game could have been uglier on the scoreboard. The team stopped playing defense in front of him during the second and third periods; there’s nothing Simpson could have done on some of the goals. Simpson deserves all the credit in the world for keeping the IceHogs in contention. (For the record, the sixth Texas goal was an empty-netter).

–Jeremy Morin continues to play some great hockey. He’s still being much more physical than he had been at the beginning of the season–even as late as December. He’s using his speed effectively, being smart with the puck, killing penalties well, and grinding in the corners to get the puck out to the front of the net.

–Jimmy Hayes has woken up as of late, too. In his last three games, he has 5 points (3 G, 2 A). He’s actually been getting to the front of the net, something he has struggled with in the past despite his size. He has even become a tad more physical. Hayes was hit late in the Monday game against Texas and might have possibly gotten his leg banged up (he was in obvious pain going to the bench), but he played on it. He was not out on the ice for the post-game Skate with the Hogs though. That could indicate something, or that could indicate nothing. We’ll find out when it comes to Friday’s game against the Wolves.

-Ever since being put on a line with Brandon Pirri, Philippe Paradis has become a new man. For those that don’t know, Paradis plays a physical game–the kid hits anything that will move. And he hits hard. But, he has not been previously known as an offensive guy. But in his last three games, Paradis has 4 assists, and is +3. He’s been seeing more ice time and has even been used as a penalty killer. Paradis is one of the hardest workers on the team so it’s nice to see him playing well.

-This really doesn’t affect Blackhawks fans at all, but Rockford signed forward Kenndal McArdle to a PTO and he saw his first three games in action in an IceHogs sweater this week. He’s a very physical player and has a decent set of hands on him. IceHogs head coach Ted Dent has shown early confidence in the Toronto native and has been using him on the penalty kill and the power play.

–Brandon Pirri‘s offensive game had a fire lit under it. In the last three games, Pirri has 7 points (3 G, 4 A) and has been a serious threat every time he touches the puck. Pirri seems to play some of his best hockey when he stars throwing the body around a little bit, and that’s what he’s been doing as of late. Don’t take that the wrong way–Pirri’s not gonna lay someone out like a Paradis or McArdle, but he’s finishing his checks and that’s key to helping his game out.

-The IceHogs became the first team to reach and exceed the 1000 penalty minute mark in 2012-13 in the AHL on Saturday night. After Monday’s game, they currently sit at 1118 PIMS. The closest team to that mark is the Syracuse Crunch with 961 PIMS.

–Martin St. Pierre and Adam Clendening were named to the AHL All Star Game.

-Saturday night was Pink in the Rink for Rockford as they raised awareness for breast cancer. The pink jerseys were auctioned off in a blind silent auction and they raised a total of $22,875.

-The IceHogs currently sit in third in the Midwest Division standings with a record of 20-19-1-1 (42 points). They are 8 points behind division leading Grand Rapids, who has two games in-hand. They are also currently in 11th in the Western Conference standings. They are one point out of 8th place, which is occupied by the Chicago Wolves, who have 3 games in-hand and a 19-14-3-2 record.