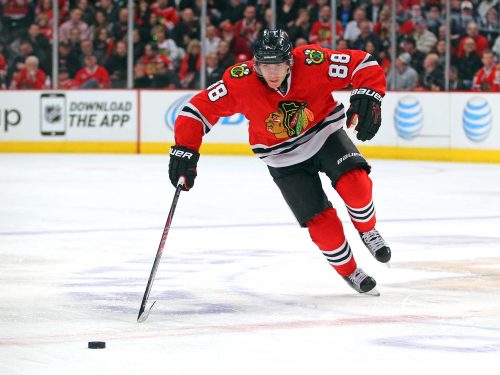 Patrick Kane is good at hockey. I am not really sure what more we should say about this guy. He’s been the best forward on this team for more than a decade and the best player for a few years, since Duncan Keith‘s mileage caught up to him. But you know all this. I’m not gonna say much in here that will surprise you. Let’s just do it.

A Brief History: In some ways it just about flew under the radar, largely because the Blackhawks had a terrible blue line and a CPR dummy in the crease when Crawford was hurt, but Patrick Kane had the best season of his career in 2018-19. His 110 points were four more than his previous high of 106 in his Hart winning 2015-16 season. Four points doesn’t feel like a lot, but the difference between 106 and 110 is probably a bit more significant than, say, 40 and 44. There is a level of dominance that Kane attained last year that we had previously seen, but it had been three years and we weren’t sure we’d see it again. Then he did it again, in his age-30 season. The guy might be a huge piece of shit, but he’s pretty much undoubtedly the best hockey player you or I will ever see suit up for this team in our lifetimes.

It Was the Best of Times: Realistically, it’s hard to expect Kane to be better than he was last year. Give that he turns 31 this November, I’d say the best case scenario for Kane and the Hawks is that he just plays at that same level again. This team has addressed the blue line (at least on paper) and the crease issues that resulted in his historic 2018-19 being wasted, and it’s reasonable to expect that players like Top Cat and Strome will improve this year and as such take some pressure off Kane. He can give the Hawks 100-ish points, give or take a few, that’s the ideal outcome here.

It Was the BLURST of Times: Being 31 catches up to Kane doesn’t  quickly, and his hands and feet are not even close to as quick as they once were. The vision and feel for the game are still there, because those things will never just go away, but Kane’s body just doesn’t cooperate at the level he’d like and as such the production falls off a bit. This all sounds dramatic, but I don’t think it would happen to the tune of him suddenly becoming a *bad* player, but just that he would be more in the 60-70 point range at season’s end. He did have just 76 points in 82 games in ’17-18, so it’s not like this would be appear as much of a fall-off overall, but that was his second lowest shooting percentage of his career, and the Hawks didn’t have much forward group to help in then. They do now. Anything less than 75 points from Kane this year would be a bad outcome.

Prediction: Kane continues his dominance, and with Cat and Strome taking the step forward that we wanted from Mitchell Trubisky but aren’t getting (I am sensitive about it, okay), his level of production does not fall off very much and finishes the year with 45 goals and 108 points. The Hawks make the playoffs and Kane finishes second in scoring, behind only Connor McDavid of the Oilers who miss the playoffs obviously, so Kane wins another Hart. He wills the Hawks to the playoffs, where they get railroaded in the first round.