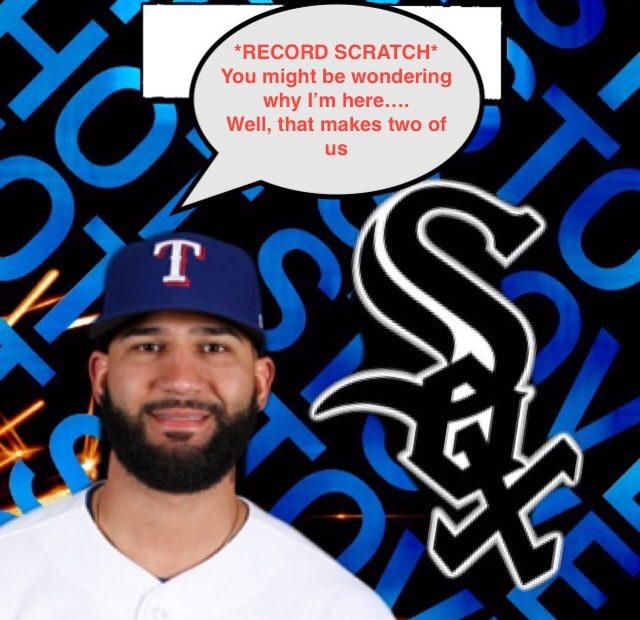 Rick Hahn made it a point to call out Right Field as at or near the top of his shopping list for the 2019 off-season. It was well chronicled how historically awful the White Sox were in 2019 at the position, but if you’re unaware they were on pace for a worst-in-history 54 wRC+ before a couple big games in September saved them from immortality. So what was the solution as the team looks to turn the page on the down years of the rebuild and march toward the post-season? A post-hype, RHP mashing/LHP flailing Nomar Mazara. Hahn is eager to prove his club can unlock the untapped potential of the former mega-hype prospect from Texas…

LAST WEEK ON NITRO: Mazara turned in his fourth MLB season in much the same fashion as the three that preceded it – by underwhelming. Nothing if not consistent, Mazara posted another season of mediocre production while crushing RHP to the tune of 13 HR/110 wRC+ in 302 ABs and bowing to the whims of LHP with just 6 HR/55 wRC+ in 127 ABs. Mazara seemingly is what he is at the plate at this point, with 64 of 79 career HR coming off RHP and a career 53 wRC+ against LHP that screams for a platoon. Mazara actually went backward in some ways in 2019 as he turned in the worst K/BB ratio of his career with a career high 23% K rate and 6% BB rate.

Mazara is also mediocre (at best) in the field, turning in a -4 DRS and keeping with a theme of being somewhere between -3 and -6 DRS for his career in RF. Nomar was slowed a bit by left oblique strain that kept him to only 116 games played, the lowest of his four full seasons in the bigs. No real speed to his game, Mazara appears to be a curious choice to end the RF woes all on his own.

TOO SWEET! TOO SWEET! (WHOOP WHOOP): Mazara, still just 25 as of late April, finally taps into the unrealized potential that scouts and industry prospect hounds drooled over as he assaulted the minors en route to Texas in 2016. The former top-25 prospect finally figures out how to crush all pitchers the way he’s been able to against RHP (for sizable stretches), allowing him to set a career high in games played and homers as he goes over 150 and 30 for the first time.

“So, sometimes, you need to lean a little more heavily on your scouts, sometimes need a little more heavily on the analytic side. And there’s some projection, especially with younger players involved.” Hahn is rewarded for acquiring such a young player that just never could seem to put it all together and helping him to realize all that potential. Mazara even turns in a passable RF defensively, aided by Luis Robert covering a nice big chunk of Right Center on a regular basis.

YOU FUCKED UP! YOU FUCKED UP!: Mazara is, in fact, a bit worse than what he appears to be. Every once and a while he drives a mistake deep into the Chicago Summer night, but all too often it is he that is the mistake. LHP remains the bane of his existence, exploiting the holes in his swing so harshly that Mazara finds himself in a platoon with Leury Garcia (or Nicky Delmonico??) by June. The K/BB ratio gets even worse as he devolves to a 25%+ K rate and becomes an expensive LH power pinch hitting option off the bench in August and September as the Sox find more a defensively capable replacement at the trade deadline in their quest to reach the first post-season berth in over a decade.

Mazara is then non-tendered in the Winter and drifts through the majors on short term deals with whichever team’s GM convinces himself that his staff can solve this human puzzle. After ‘flirting’ with the top of the market in Mookie Betts and George Springer, Hahn inks Marcell Ozuna to a four-year, $65M deal a year after he probably could’ve had him for 5/70 instead of spending prospect capital on the allure of what Mazara could’ve been.

BAH GAWD, THAT’S MAZARA’S MUSIC!: I tend to think Nomar Mazara is what he is after over 2,000 Major League at bats and he’ll become Hahn’s most regrettable move of the 2019 Winter. Regrettable might not be the right choice of word, considering the cost of Steele Walker(Texas Ranger) probably has a ceiling for essentially what Mazara is right now. This just feels too much like the type of move you make when you’re a year or so out from contention, trying to catch lightening in a bottle and get a few years of cheap-ish quality labor out of a corner OF spot. The problem is that while the Sox may be a year out from REALLY contending, they went ahead and filled basically every other hole they needed to with what amounts to major upgrades, leaving a little more to be desired from the absolute pit that has been Right Field.

This is not Mazara’s fault, and maybe he does have something left to show us. I think it’s foolish to think he’ll give anything more than a .260/.315/.450 line and a wRC+ around 90 overall, and it’d have been a good idea to have a platoon to hit LHP and realize his best usage. Maybe that’s the real plan, that this is the way Garcia gets at bats after he’s moved off 2B for Madrigal in May or so. Garcia did turn in a 110 wRC+ in 183 ABs against LHP in 2019…so a combined 110 wRC+ between the two would be nearly 40 points higher than 2019 amalgamation of shit that was White Sox Right Fielders.

We’d all happily take that, especially if it’s part of a playoff formula.