Due to a fortunate bit of scheduling, the Capades’ stand at the United Center coincided with the NHL All Star game, and as a result the Hawks’ only played four games away from the West Side in their 16 days since last being at home. And they’ll do so tonight against the Sharks, a team no one can figure out what exactly it is they’re doing.

While the results in the standings say that the Sharks are currently sitting in second in the Pacific and therefore would have home ice at least once, both their process and the fact that the Pacific has been shit-ass-terrible (a scientific term) would show that they’re at best running in place from their playoff absence last year. Peter DeBoer had been known for two things prior to San Jose- shot suppression and playing favorites with bum-ass veterans. And the Sharks are dead in the middle of the pack at 52.1 attempts per 60 minutes of 5v5 compared to 56.3 last year, and Dainus Zubrus is on the roster, so let it never be said that DeBoer doesn’t accomplish anything. But veterans like Zubrus or the useless Mike Brown get minutes at the expense of any number of San Jose’s young developing forwards with horrible, horrible white yuppie names (Barclay Goodrow, Rourke Chartier, Cavan Fitzgerald are all children within the Sharks’ system), especially since GM Doug Wilson tried to do everything possible to launch his veteran core but then didn’t two summers ago. But hey, Ben Smith and Raffi Torres are in the minors right now, so baby steps and all that.

That veteran core up front for the Sharks is still in tact and it isn’t getting any younger. Joe Thornton is still highly effective if not over a point-per anymore at nearly 37 years old. While he and Joe Pavelski (who leads the team with 25 goals and 51 points) get the benefit of some swank zone starts, they both certainly do plenty with them with both over 55%. Patrick Marleau has been moved back to center regularly for the first time in a decade and for some reason is taking more defensive zone draws than any other center on the team, and his 48.6% share and ugly -17 certainly reflect that. Rat Boy Logan Couture missed a significant amount of time and only has 8 points since the calendar turned. New addition Joel Ward has contributed nicely with 31 points, and is on pace for a career high, with a goal and an assist likely coming tonight because that’s just what Ward does to the Hawks.

The Sharks’ blue line is a bit more solid than usual even with Brent Burns still running around the ice like whirling, hairy, toothless, gross, unfunny dervish. Veteran Paul Martin was brought in to play centerfield for Burns, and his positioning, smooth skating, and crisp passing have helped the two form the Sharks’ best possession driving duo. Golden Retriever Enthusiast Marc-Eduoard Vlasic remains the Sharks best all-around defenseman and gets the top assignment of the opposition and flips the ice with a 51.25 share.

In net, Martin Jones has been about as average as one could expect someone named “Martin Jones” to possibly be. Jones sports a .913 overall and a .922 at evens, which are totally adequate. However his numbers do spike to .918 and .926 on the road, and is part of the reason why the Sharks oddly have the best road record in the West at 17-8-2, and are curiously shitty at home where they are 10-12-2 at the formerly foreboding HP SAP COMPAQ Pavillion Center thing.

As for the Men of Four Feathers, Artemi Panarin did not take place in the morning skate and is a gametime decision with an illness. Even his absence couldn’t get Jiri Sekac onto a real line in practice, and if Panarin can’t go, it will likely be Richard Panik who gets a look on Anisimov’s left.

With Viktor Svedberg now sent back to Rockford where he rightfully belongs, the platoon of Rozsival and Scuderi will resume. Rozsival played the last two games on the road, so with last change it will be easier to hide Rob Scuderi in the event that Quenneville wants to get him some burn.

The Hawks only have two back-to-backs in the final stretch of the season, so in theory Quenneville could play Corey Crawford as much as he could possibly want. But Scott Darling is going to have to play some of these games in order for Crawford to not collapse, and preferably at home given Darling’s struggles on the road. But tonight is not that kind of night with the Sharks in town.

In addition to the Martin Jones performing better on the road, the Sharks also have one of the more symphonic and patient power plays in the league, as Thornton, Marleau, and Burns know how to get zone entries without even thinking about it, and are incredibly patient. The Hawks cannot afford to give this team any more looks on the advantage than should be necessary.

Though the Hawks have played more games than anyone else in the league, they will still have the opportunity to salt away the division even if the games will be more sparse. Dallas’ goaltending issues were on full display on Saturday, and the Blues losing Alex Pietrangelo until after the deadline severely hampers their ability to take on the top lines of the opposition. Accomplishing this entails taking as many points as possible at home, which the Hawks will have four straight opportunities to do starting tonight.

If you’re going to tonight’s game, pick up a copy of our gameday program outside the arena. If you’re not, you can get the digital version right here by clicking this link. 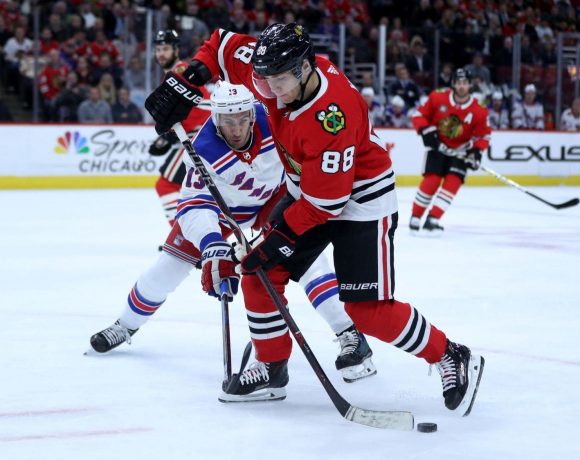