Nothing like a quick turnaround to act as a palate cleanser after the Hawks’ first 0-2-0 start ever in the Quenneville era. Or for the more reactionary set, another opportunity to get in line to get off a sinking ship.

But as was on display last night, while the results haven’t been ideal, particularly on the penalty kill, there are some tangible things to take from last night, particularly in the latter stages. While the Preds do boast a lot of team speed, there isn’t a lot of it coming from the bottom pairing, and that was even before Anthony Bittetto did himself no favors by engaging in Jordin Tootoo’s stupid bullshit. Matt Carle has been too slow to keep up with much of anything for over seven years now, and it will be more difficult for Peter Laviolette to hide him without the benefit of last change. Even with that edge, Roman Josi was nearly fully submerged at a 27% share of attempts when on the ice last night, and the PK Subban show was also shy of 41%. De facto number 1 center Ryan Johansen was in up to his giant face as well with a 35% share. In a game that was within one goal the entire time, and with the Preds at home to match up against the Hawks 10 forwards, 5 of whom are children, it’s not exactly encouraging to have a top center and top defensive pairing swimming that hard up stream. But three power play goals will hide a multitude of sins.

Yannick Weber will draw in for the Preds tonight in place of Bittetto’s needlessly smashed up face, and considering that they don’t play until Tuesday night, it’ll probably be Rinne’s cage again. Rinne obviously looked awful in the first but came up large in the late goings, but if he goes again tonight, Ol’ Shit Hip will probably be made to work a little harder throughout the entire 60.

As for the Men of Four Feathers, with HEART MAN now out for a protracted period of time, Dr. Rasmussen at the very least will draw in tonight on the fourth line. How much that ends up mattering dragging Jordin Tootoo’s ass around remains to be seen, or if there will be a corresponding move with the Pigs come tomorrow.

With no morning skate today, it’s unclear whether it will be Crawford or Darling in net tonight, but no matter what happens, the calls for Corey Crawford to be traded will probably begin despite the fact that he’s had next to no chance on any of the 6 goals he’s allowed on the advantage. What is also unclear is whether TVR’s brief stint in the pressbox will come to an end tonight, and here’s hoping that he stays stapled there for a good long time. With TVR out, the Hawk blue line through all three pairs can really move, and it becomes just how apparent how caught in between Passenger 57 is at a constant. If by some cosmic injustice he does draw in, it will likely be for Forsling, which at least would put Campbell on his natural left side.

Make no mistake that this is still a work in progress, and the penalty absolutely has to improve. And a bit of patience will be key for both a coaching staff and a fan base that has been for the most part instantly gratified for the better part of a decade. But there are some parts here that could come together, and there were some signs of it last night. Unless they lose again tonight, then everyone needs to be traded and Alex Tanguay needs to be brought in. Let’s go Hawks. 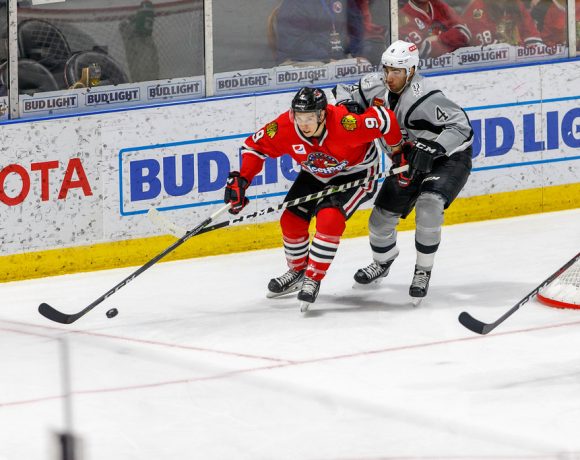