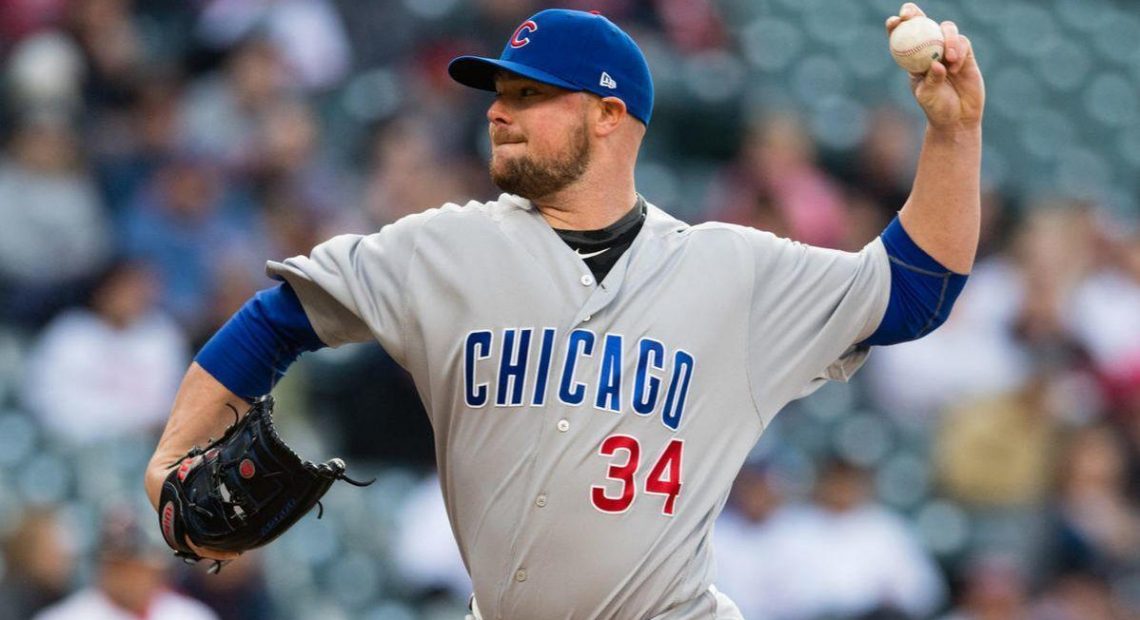 It does sound a little weird to say Jon Lester was in need, or even close to needing, a bounce-back season. After all, a 3.32 ERA last year and an 18-6 record would suggest that things went pretty ok (and if you’re Phil Rogers, you would say they definitely did, before pining for Curtis Granderson again). But as I wrote extensively during the 2018 season, Lester did an awful lot of dancing through and over the flames, and can thank whatever shaman he employed for getting him through the campaign with those numbers and not whiplash from turning around frequently.

Lester’s strikeout-rate was a career-low last year, and his walk-rate the highest in seven seasons. He gave up a ton of hard contact, and when you combined his walk-rate with his hard-contact rate–essentially the two things a pitcher can control–he was in the bottom third of the league. Basically, the Cubs superior defense pulled his ass out of a sling a good portion of the time, and when they didn’t Lady Luck was the one reaching over the cliff and grabbing his wrist.

So when PECOTA and other projection systems had the Cubs belching up noxious gases this season, you could certainly see why, once you were done choking on your fan-rage, particularly when it came to Lester. Surely luck wouldn’t be so friendly without exacting a bounty soon after.

And yet Lester has burst out of the gate this year, with a 1.73 ERA, 0.96 WHIP, and a 3.35 FIP which is much more in line with his 2016 season that saw him in the top-three for Cy Young voting. Granted, it’s only five starts, with two abridged due to either injury or a return from same, but how did we get here?

Well, for one, Lester is still getting luck to be on his side, and violently so. Hitters have only managed a .231 BABIP against him, which is some 66 points below his career-average. And it’s not like Lester has found some elixir to softer contact that might produce a lower BABIP, like Hendricks does when he’s on song. In fact, Lester is giving up aggressively more hard contact than he did last year, 41% this term compared to 31.9% last year. So yeah…that’s going to be an issue. On hard-contact alone, batters against Lester have only managed a .280 BABIP, when the rest of his career for Lester that mark is usually .370 or higher. A reckoning could be coming.

Second, Lester has a 96% left-on-base percentage, which means whatever runners are getting on are getting stuck out there. League average on this is somewhere around 72-73%, and Lester’s career-mark is 75%. Sequencing has also been a friend to him (so many friends!). This won’t last, though twice in his Cubs career Lester has managed an 80+% LOB%, so it might not come down as aggressively as it would for others, or his BABIP.

But hey, let’s be fair. It’s good to be positive. Lester’s K/9 is up to levels not seen since 2010, and his BB/9 is down almost a full walk. That’s good, and not due to luck. That’s what a pitcher controls best, after all. So why should that be?

There is a slight change in approach, as Lester is throwing more cutters than he ever has. Lester used to keep his cutter-usage to around a quarter of the time, give or take. This year it’s been a third of his pitches, purely at the expense of his four-seam fastball. And he’s using it differently. Here’s where Lester has generally thrown his cutter over his career: 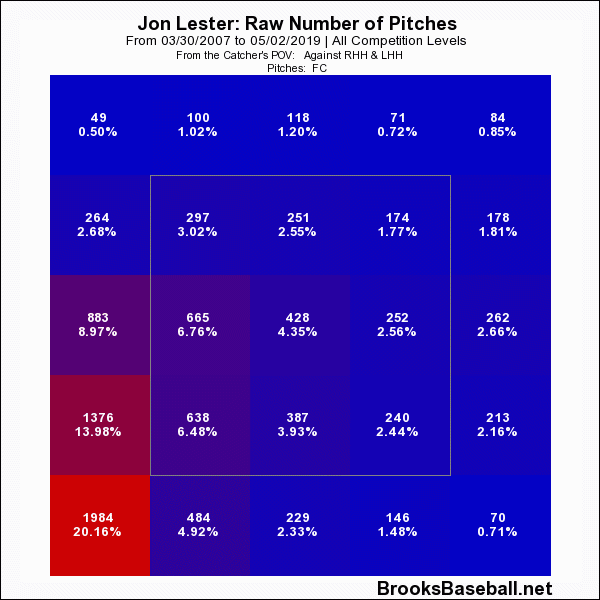 Almost exclusively in at the hands and ankles of righties. Now this year: 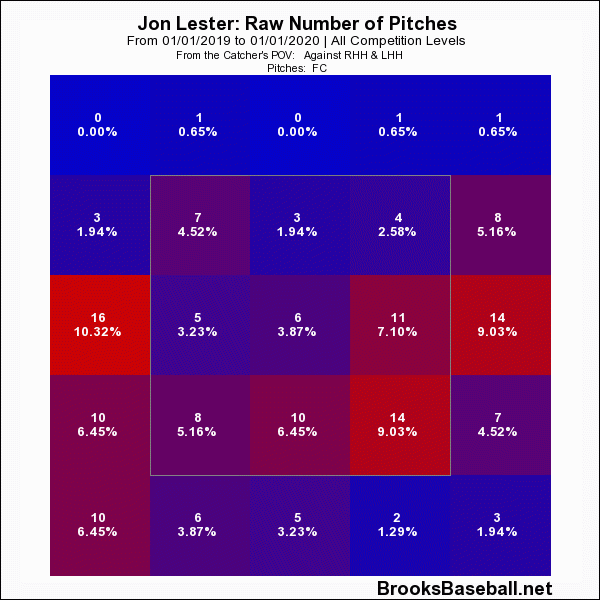 Both sides of the plate, as Lester basically morphs into late-career Tom Glavine. Now, it’s not as if Lester has had pure success out there, as this chart of slugging against him on that cutter shows (again, very limited sample): 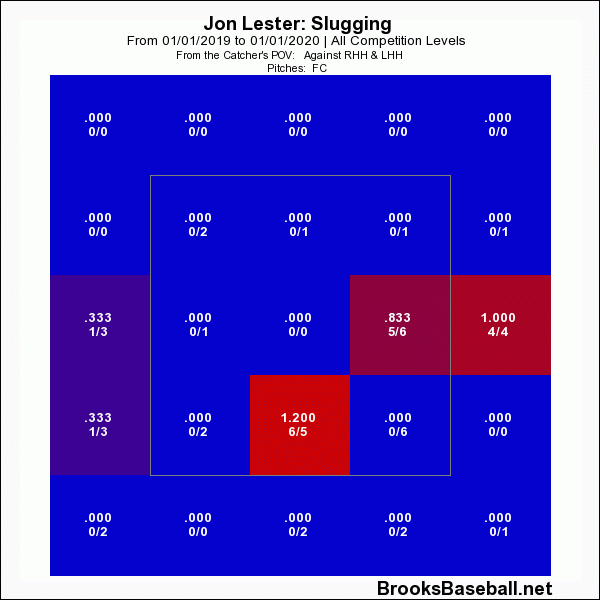 But having to account for the outside corner has kept the inside a valuable place for Lester to go, and hitters can’t just key on there and get the hips open and such.

Another small change Lester has made is getting ahead of hitters. He’s lifted his first-strike percentage so far to 62%, the kind of numbers he hit in his first two years with the Cubs but had gotten away from the last two.

So there are some things to he encouraged by, and some things to be wary of. I would guess somewhere around here soon, Lester is going to get paddled around in a start. But he’s also smart enough to keep dancing through the flames. Now let’s all take a moment to picture Lester dancing. Ok, that’s enough.