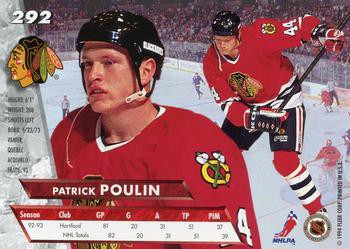 This one comes to us from VanDorpsMullet. Come to think of it, Van Dorp would have been an excellent choice too.

There I was, knee-deep into a Junior Bacon Cheeseburger at the Wendy’s on Court Street in Athens, Ohio when I almost choked on it. The “it” here was not the wimpy cheeseburger, but rather the hateful words that I was reading in the back page of Ohio University’s student newspaper. Evil words. Sad words. Words that wounded me forever: Steve Larmer and Bryan Marchment were traded for Patrick Poulin and Eric Weinrich.

In hindsight, this trade wasn’t all that bad. Steve Larmer had apparently vowed not to play for the Hawks again (http://www.nytimes.com/1993/11/03/sports/hockey-keenan-gets-his-men-patrick-and-turcotte-gone.html) though I missed this news at the time. This was well pre-Internet and The Post (the student newspaper) was not exactly thick with NHL news, I had no TV and thus I had no idea that Larmer was holding out. The Hawks obviously wouldn’t have had a whole lot of leverage in trade negotiations, so to get a pretty good 4th d-man (and all-around stand-up guy and great Oduya comp) in Eric Weinrich and a young winger with promise (Patrick Poulin) for a knee-hunting douchebag (Bryan Marchment—who makes guys like Bieksa and Jackman look like they should be up for the Lady Byng) and a guy who never wants to play for you again (regardless of his HoF pedigree… and why the fuck is Mr. Larmer not in the HoF yet?!) was not a terrible haul.

But still. This was Steve Fucking Larmer. Larmer was Hossa before there was a God (or a Saad). In fact, I think Larmer begot Hossa during one of his nights out on Rush Street (Yeah, yeah… the ages don’t match up right, but we all know that shit gets weird with Gods. I mean, we can’t really understand Time the way a God lives it so all I’m saying is that there’s a possibility). I loved Larmer. When I played hockey on flooded and frozen baseball fields in the burbs, he was my go to guy: “Savard passes to Secord. Secord to Larmer…. Score!” He helped lead the Hawks to their first Cup appearance of my lifetime. And now Larmer was gone and all I was left with was a half-eaten Junior Bacon Cheeseburger and Patrick Fucking Poulin. Or rather: patrick fucking poulin.

I tried to like Poulin over the next few years, but he was always rotten with the taint of the memory of that trade. He was weak in the corners. He floated the way Spiritualized did (https://www.youtube.com/watch?v=iB7E1D_3Na4). He never locked down the other teams’ best player. He never scored very much and when he did score they were never important goals. I suppose that it’s entirely possible that he scored one or two meaningful goals, but I just don’t remember any. In fact, the not remembering is sort of the point: he was totally forgettable. He was the antithesis of Steve Fucking Larmer.

I actually did a Youtube search for Poulin and the only 2 videos that popped up were for very, very, very weak fights (Patrick Poulin dropped the mitts twice???!!! WTF???). If you are really itching to waste some time at work, you can check these shit shows out for yourself here: https://www.youtube.com/watch?v=OswdusfRrro and here: https://www.youtube.com/watch?v=QE7xYN7kNWY (Note: he’s a Canadian in the 1st video and a Whaler in the 2nd. Maybe that’s why I never remember him fighting). No goals. No heroics. No unforgettable Patrick Poulin moments. The guy never produced more than 15 goals and 30 points as a Hawk and so when you combine that with a general lack of defensive ability, TRUCULENCE, and playmaking, what you had was a guy that couldn’t play on the 3rd or 4th lines and couldn’t produce enough for the 1st two lines. In other words, you had yourself a Fernando Pisani. And who can remember the 2010-11 season without a little bit of a shudder?

But wait a second. If the latter is my criteria, maybe I should just go ahead and switch my choice to Michael Grosik…