It’s Hard To Be A Saint In The City – Predators vs Hawks Preview, Radiator Flushing

Game Time: 7:30PM Central
TV/Radio: CSN Plus, SportsNet, WGN-AM 720
All The Young Dudes: On The Forecheck

Tonight with the visiting Predators on the frigid near west side, the Hawks will close out a four game homestand before a swing through the two self-appointed capitals of the hockey universe in Toronto and Montreal, and close out January playing 6 of its final 8 games on the road. And the team the Preds ice tonight is drastically different than the one they brought about a month ago, and not necessarily for the better.

The Predators struggles with offense this season have been well documented. Though they drive even strength play better than everyone except the Kings, they’re a mere 17th in overall scoring with 2.5 goals per game. Much of that drive has come from their blue line, which was arguably the deepest in the league, the key word there being “was”. Knowing he needed scoring help at forward, GM David Poile dealt from a position of strength to acquire what he perceives as a top center, except he traded the wrong guy.

Seth Jones is in Columbus now having to deal with John Tortorella’s bullshit on a go-nowhere team that’s retro-fitting its roster to the whims of its dinosaur coach. In return the Predators received Ryan Johansen, whose tumultuous time in Columbus has now ended after a protracted holdout last summer where the team did everything it could to drive his price down by denigrating his character and multiple benchings and healthy scratches at the hands of Torts The Almighty. Ryan Johansen is a solid offensive talent with great hands, and while big at 6’3″ 215 lbs, doesn’t play with a physically imposing style. And on top of that he bears an unfortunate resemblance to Eugene from The Walking Dead. He’s got two consecutive 60+ point seasons before age 24 on his resume, and could make it a third this year with a second half push, and he’s under control at a very reasonable $4.0 mildo cap hit for two more seasons. But he’s not Seth Jones.

Seth Jones is barely 21 years old and is a physical monster with his NBA alum father at 6’5″ 210 that will only fill out and get stronger. Popeye’s Large Adult Son is well ahead of the 200 game curve and was taking shifts in the playoffs against the top assignments of the Hawks after Shea Weber’s injury. He has been so good that he not only dragged the maggot eaten, plague addled corpse of Barret Jackman into being a possession positive, they were dominant, as Jackman’s numbers are a 59.4% with Jones, a 48.8% share without. Without Jones, the Preds will now get a look at what Jackman really is. It also forces the dynamic third pairing of Ellis and Ekholm into second pairing duty, where they will not be able to bum slay as easily while Josi and Weber absorb the opposition’s top threats.

While the deal is being hailed as a pure hockey trade that both sides won, in actuality David Poile made a panic trade of a young player still under team control with virtually no ceiling for a questionable fix. Yes the move in theory slots Mike Fisher down to his appropriate third center role and complete piece of shit Ribeiro to a #2 center, but it was at the expense of a championship blue line. If Poile had any vision whatsoever, he would have traded an aging and declining Shea Weber’s elephantine contract for a raft of help, as Weber is (or was, rather) the third best defenseman on that team. But because he’s the captain and the face of a franchise that already has identity issues, he was retained for public image purposes. And should the Preds miss out on the playoffs, between this move and his embarassing chasing of Mike Ribeiro (he of the sexual assault case settled out of court and 3 even strength goals), Poile should rightfully be out on his ass. But he won’t.

Of course all of that hinges on Ol’ Shit Hip Pekka Rinne, who has been objectively bad for two months and counting now, following a .925 October with an .898 November and .902 December. The turn of the year has slipped even further for Rinne, with an .887 since the calendar turned in 3 starts. If John Scott can be an All Star, so can Rinne it seems. That doesn’t mean he can’t steal a game still with that glove hand alone, and fortunately for him his blue line keeps the puck at the other end of the ice more often than not.

As for the Men of Four Feathers, the Richard Panik Experience will continue to be on hold it seems, though with the way things are going a change in the lineup wouldn’t be expected, and that includes MANSHITTER remaining in for Bryan Bickell, whose early goal on Sunday naturally set off an alarm in Hawks Beat Writer HQ where yet another glowing fluff piece about a career fifth liner buoyed by a team top heavy with hall of famers needs to be written because that’s what people crave. That is when they’re not too busy making fun of BASEMENT BLOGGERS with the equally mature “Three Cups” response to Joel Quenneville’s extension. Corey Crawford will get the cage once again tonight as well.

The Preds were above water on the road against the possession averse Avalanche and Coyotes in their two post Jones games, but now facing a team that has actual offensive depth beginning to congeal, Peter Laviolette is going to have some decisions to make regarding which line Weber and Ekholm are sent out against, and if he decides to send Barrett Jackman out at all. Conversely, for a single game at home, it will be noteable if Joel Quenneville gives Lavvy the Toews-Fisher matchup he wants and trusts Danault with Johansen, or if Toews will once again draw the top assignment. Either way, no shot on net is a bad shot on net with how Pekka Rinne’s last 2+ months have gone. Famous last words, indeed.

Due to the weather, the print edition is on-line only tonight, so pick up your copy here. 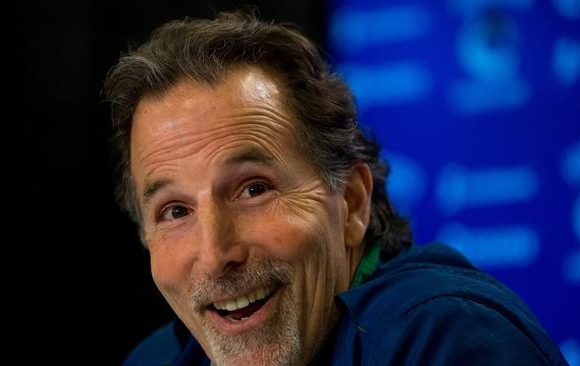