I Don't Mind The Other Guys Dancing With My Girl 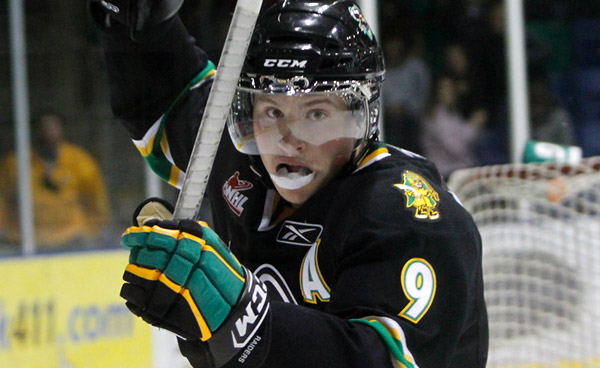 Tuesdays have become our organizational endoscopy, so we have to do the other half and check out the kids in juniors and college.

For a new wrinkle, let’s start in the college ranks and then make our way to the Great White North. And like I made the mistake of doing, we’ll start in the Northeast. Braden Birch was part of the Cornell team that clocked Michigan at MSG. Watched a lot of that game and he was a lot more noticeable than he was in NBCSN’s coverage of the tilt against Harvard.

Up in Boston, Kevin Hayes didn’t scratch in a 6-3 win over Dartmouth on Comm Ave.

Justin Holl only played in one-half of Minnesota’s double-victory over Vermont in the land of Magic Hat and corduroy pants.

Michael Paliotta was a -3 in one game against Minnesota for Vermont, earning himself a scratch for the second one.

Stephen Johns had a pretty rough weekend, going a -3 in a win and a loss for the Domers.

Nick Mattson had a goal in the North Dakota win over the other ND in the first half of this little soiree.

Paul Phillips was an even against both Yale and the #2 team in the nation New Hampshire for Denver.

Ok, up to the North. Everyone got their passport and giant bag to bring Molson Dry back? Ok!

Phillip Danault missed a couple games due to illness, but returned on Sunday to get an assist against Drummondville. He should be fucking off to the Canadian World Junior training camp soon. His teammate Brandon Whitney had a pretty stellar 46-save performance against Rimouski, but then backed that up by surrendering four goals on 26 shots against Drummondville.

Dillon Fournier had two assists and was a +4 in two games for Rouyn-Noranda.

Alex Broadhurst had three goals and four points in three games for London, all in three nights.

Garrett Ross appears to be injured, as he hasn’t played since November 10th.

Mark McNeil had goals in three straight nights for Prince Albert, and moved into the top 15 in scoring in the WHL. He’s another who’ll be off to audition for his national team soon.

Mac Carruth had two starts over the weekend, both wins. In both he gave up two goals, making 20 saves in one and 27 in the other. His GAA has ballooned to 1.51 and his SV% has plummeted to .942. So yeah, real bum here.

I’ve been ignoring Travis Brown at Moose Jaw. Which is strange, as you’d think I’d take any excuse to type the words, “Moose Jaw” as I could. Anyway, he returned from injury this week and didn’t scratch from the blue line. He’s got 15 assists in 24 games but is an unsightly -7.

And that’s the end of that chapter.