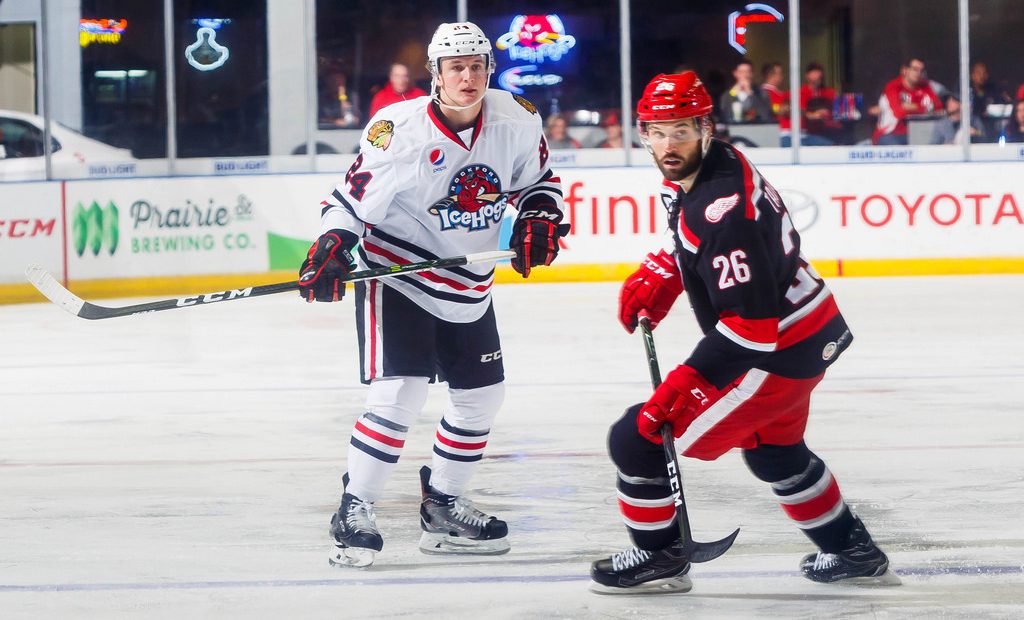 The Rockford IceHogs are set to be comprised primarily of prospects for the second straight season. With several defensive prospects signed to contracts this spring and a slew of returning forward prospects, there isn’t much room for veteran contracts.

That doesn’t mean that there isn’t a need for them, however.

It was very apparent that the injection of experienced talent provided the kick in the pants required for the piglets to go on a successful run this spring. Every organization can use skaters that can provide leadership and excel at the AHL level. Even Rockford, although that hasn’t always been a top priority.

A lot of teams obtain talent that won’t show up in an NHL rink for more than a cup of coffee, yet can shine in the AHL. Many of Rockford’s Central Division rivals utilize this strategy and keep these players around season after season. Again, that hasn’t been the IceHogs strategy of late.

First and foremost, the Blackhawks use their AHL affiliate to develop prospects. Totally legit practice, though it doesn’t hurt to support the prospects with players from whom they can learn and with whom they can win.

Last season, the roster was light on veterans. Right now, that will again be the case unless the Hawks/Hogs do one or more of the following:

There are a slew of players that fit the bill. Just for kicks and giggles, last week I compiled a list of players who could be available via free agency as either an NHL depth signing or an AHL contract Rockford could offer. It is a true “wish list” as most of Rockford’s AHL deals go to young, unproven players and the Blackhawks haven’t been stacking a lot of top-end AHL level players at the BMO the last few seasons.

Even though many of the players on my list are now unavailable after signing with other organizations (for good reason), I thought I’d go ahead and share my list with you this week. If Chicago or Rockford announce the acquisition of any of these players, it’s a good thing for the IceHogs.

The 29-year-old power forward has 143 games of NHL experience in stops with Pittsburgh, Winnipeg, Montreal and Detroit. Most of his last four seasons have been spent as an AHL player; he lacks the skating ability to stick at the NHL level at this point of his career.

In the AHL, Tangradi has been a very consistent goal scorer. In a full season of action, pencil him in for 40-50 points. The only question I’d have is if Tangradi would be able to play at the pace Jeremy Colliton wants to push. He seems to have kept up in Grand Rapids.

An example of a player who isn’t quite big or fast enough to find steady NHL work but dominates offensively at the AHL level. The 5’10, 195-pounder does have 22 goals in 152 games (mostly with Carolina), but Terry has really excelled at lighting AHL lamps.

The 29-year-old paced the league in scoring with 71 points (32 G, 39 A). He has the savvy to get to scoring opportunities and the skill to convert. Terry has potted at least 25 goals in each of his last five full AHL campaigns. That includes 30 goals in 58 games with St. Johns in 2016-17.

Terry is a hard-working player who has worn an “A” on his sweater with the Charlotte Checkers as well as with Montreal’s affiliates in St. John and Laval.

Another forward with high AHL upside, Agostino led the league in scoring in 2016-17 with 83 points when with the Chicago Wolves. His numbers were down this season playing in Providence as a member of the Bruins organization (53 points), but Agostino would be a great fit for Rockford.

The 26-year-old has decent size (6’0″, 202) plus the wheels to play the up-tempo game preferred by Colliton. Agostino would look mighty fine on the Hogs top line.

A native of Park Ridge IL, Mersch starred at Wisconsin for four seasons. He is a power forward-type that has been a 20-goal scorer in three of his four AHL campaigns.

Mersch may lack the skating ability to entrench himself in the NHL, but has plenty of skill as a shooter of the puck. He also had 22 points (13 G, 9 A) on Manchester’s 2014-15 Calder Cup champs.

Supplies a wealth of experience to what will likely be another young bunch in Rockford. Cannone is 31 with plenty of AHL credentials. He was up with Minnesota for three games in 2016-17, but has spent the remainder of his seven-year pro career playing for Binghampton, Chicago and Iowa.

Flynn has 275 NHL games under his belt playing for Buffalo and Montreal. He spent this past season in Texas, scoring 47 points (18 G, 29 A) with the Stars and helped them get past Rockford on the way to the Calder Cup Final this spring.

Flynn is a versatile two-way forward who can play at center or wing and is a solid penalty killer to boot. He turns 30 this month and could be a veteran mentor to the piglets.

The 27-year-old has spent his pro career with Minnesota, having signed there after a college career at the University of Minnesota-Duluth. He has spent three seasons with the Iowa Wild.

Palmquist had career-best numbers for Iowa last season, with six goals and 28 helpers. He’s a hard-working puck-mover who could bring AHL experience to the back end.

Another player the Hogs saw a lot of in the playoffs, Regner is 29 and has nine AHL seasons under his belt. This season, it was with Texas, where he recorded 10 goals and 21 assists for the Stars.

Regner has also played for the Wolves as well as the Peoria Rivermen back when they were an AHL franchise. Count tours with Syracuse and Springfield for the veteran.

Regner can handle power-play duties and can get the puck out of his zone and up the ice. He could take on the role Adam Clendening played for the Hogs this spring.

22 goals in his second year of captaincy for Manitoba. Physical, checking-type player with size who is a steady 20-30 point scorer in the AHL.

Butler came back to the AHL from Europe with Milwaukee and scored 24 goals with 21 assists in 67 games. He also played on the U.S. Olympic team. At 31, still can skate and score.

Western Michigan grad who signed an AHL contract with Texas and put up 30 points in the regular season, then ten goals in the playoffs. Little guy, big motor.

Long time AHL scorer for the Texas Stars. Is 34 and his goals were down this past year but still recorded 61 points. Re-upped with the Stars on an AHL deal last week and will play his tenth season in Texas.

Brett Sutter-C/RW (Remains with Ontario of the AHL)

The IceHogs have a number of players under AHL contracts for the coming season. Forwards William Pelletier and Henrik Samuelsson both return for another season, as well as Radovon Bondra, who was injured for most of 2017-18. Defenseman Josh McArdle, a Rockton, Illinois native, signed an AHL contract with the team last week. Goalie Matt Tomkins is also under contract with Rockford.

I wouldn’t expect more than a player or two to be signed by Rockford this summer. Same goes for NHL depth signings by the Blackhawks. I crossed a lot of these guys off my list Sunday and expect to cross off a bunch more this week. Maybe, however, one of those names gets brought into the organizational orbit.