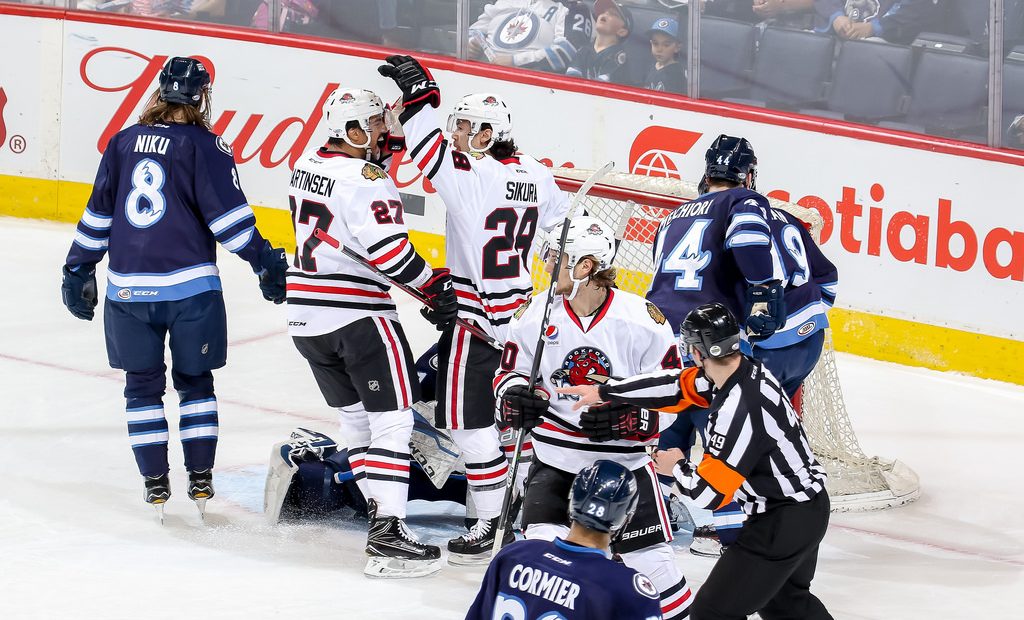 The Rockford IceHogs, AHL affiliate to the Chicago Blackhawks, are halfway to a Central Division Final victory over Manitoba. The Hogs have surged to a 2-0 series advantage of the strength of two wins on the road this past weekend.

Rockford took Game 1 Friday by a score of 4-2, then came back the next afternoon and beat the Moose 4-1. The IceHogs are 5-0 so far in the postseason. They can build upon that streak in the confines of the BMO Harris Bank Center with Wednesday night’s Game 3.

The Hogs special teams continued to be a difference-maker in the playoffs. Rockford was 3-10 in power play opportunities, while holding the Moose scoreless in five chances. The IceHogs controlled large stretches of action in Manitoba and were more effective physically to boot.

Here are a few thoughts to chew on as the action returns to Winnebago County in a couple of days.

A Team Transformed On The Fly

A lot has been made about the six players the Blackhawks sent to Rockford following the conclusion of their season. The broadcasters in Manitoba brought it up several times this weekend, as did the Chicago Wolves crew in the first round.

To suggest the Hogs are being led by mercenaries who arrived just to buoy a Rockford playoff run is not giving enough credit to the players who were around for the late-season push to the postseason. Yes, Victor Ejdsell has certainly been an x-factor so far. John Hayden and David Kampf have deepened the lineup for sure.

However, Andreas Martinsen spent most of his season toiling in Rockford. Jeff Glass, due to the strong play of Collin Delia, hasn’t seen the ice in the playoffs. The other goalie that came down, J.F. Berube, didn’t even report to Rockford after being re-assigned.

When the 2017-18 season began, the IceHogs were well-stocked with prospects but lacking in veteran leadership and physical know-how. At some point in the schedule, this glaring need was recognized and addressed in a host of moves.

This includes Cody Franson’s January assignment to Rockford, the acquiring of Chris DiDomenico in mid-February and Lance Bouma being assigned to the Hogs  to Rockford late in that month. Over the last half of the AHL season, the piglets got a year of experience under their belts. They also were reinforced in a way that added a physical, veteran element that is tailor-made for postseason staying power.

Manitoba went into this series without its leading scorer. Mason Appleton, the league’s top rookie, has been out with an injury suffered in the previous round of playoff action.

Saturday, Bouma crunched AHL Defenseman Of The Year Sami Niku against the boards in the corner of the Manitoba zone in the second period. Niku was able to finish his shift but left the game. He did not return. Appleton and Niku were arguably the two best rookies in the league this season. Having them both out against Rockford is going to leave a lot of scoring slack for the Moose to pick up.

Tyler Sikura potted goals in both games and played strong hockey in his own end as well. The IceHogs MVP of the regular season has continued to do the dirty work needed to get pucks in the net. For the postseason, he’s tied for the team lead (with DiDomenico and Ejdsell) with three goals.

Rockford’s rookie goalie has been Deliariffic, stopping 57 of the 60 pucks sent to his net. He was instrumental in the Game 1 win, negating several Rockford turnovers that could have had the Hogs in a hole over the first 40 minutes. Delia owns a 1.52 GAA and a .949 save percentage in addition to a 5-0 postseason mark.

I am definitely interested in how the piglets will draw as the games take on more importance. The Moose, on a weekend, drew 3,816 and 3,955 fans to the Bell MTS Place for the opening pair of contests. That is more than a bit off their season average of 5,277; to be fair, Winnipeg does have an NHL team in the same building in action this spring.

Game 3 is Wednesday, which isn’t typically a big attendance night at the BMO. Back in the 2015 Calder Cup Playoffs, Rockford hosted three games against Grand Rapids in the second round. The IceHogs averaged 4,834 that season but had the following gates attend the playoff match-up:

Over 5,400 fans turned out for the Hogs win over Chicago in Game 2 of the first round. I believe that that is a franchise high for playoff attendance by a couple of thousand people. The previous high was May 11, 2008, when 3,306 showed up for Game 6 of Rockford’s second-round series with the Wolves.

Is the playoff buzz sufficient around this part of Northern Illinois to pull people away from local high school sports action? The IceHogs have an enthusiastic fan base who will be making the trek to the BMO Wednesday night. If that total tops 2,500 fans, I will be pleasantly surprised. If the game draws over 3,000 fans, I’ll be stunned (but in a good way).

It would be great if the IceHogs playoff run could pick up fan momentum; a telling indicator may well come on Friday, when Rockford hosts Game 4.

The Moose opened the scoring late in the opening period after Julian Melchiori lobbed the puck out of his zone and into Hogs territory. Viktor Svedberg and Cody Franson were both safely back, but Svedberg was unable to get control of the bouncing biscuit. Buddy Robinson got the handle on the loose puck and beat Hogs goalie Collin Delia at the right post for a 1-0 Manitoba advantage at the 16:56 mark.

Rockford got an equalizer midway through the game on a slick transition play that started with Carl Dahlstrom getting possession of the puck in the corner of his own zone. In short order, the puck made its way to Matthew Highmore in neutral ice. Highmore sent it across the ice to Victor Ejdsell entering the Moose zone. The big forward zipped around Melchiori to gain a path to the right post, where his backhanded attempt got by Manitoba goalie Eric Comrie at 11:53 of the second.

The IceHogs used the power play to take the lead 3:29 into the final frame after a delay of game penalty on Manitoba. Tyler Sikura got a stick on a Chris DiDomenico offering to redirect the puck past Comrie for a 2-1 Rockford advantage.

Just 45 seconds later, John Hayden one-timed a pass from Andreas Martinsen. The shot from the slot kissed cord and put Rockford ahead 3-1.

The Hogs added an empty net goal from Cody Franson when a shorthanded Moose club yanked Comrie from the crease with less than a minute to go. Manitoba got a tip-in from Jan Kostelek, but the clock ran out with Rockford on top.

Delia, who kept his team close in the first two periods on several point-blank chances off of Rockford turnovers, made 24 saves to pick up the win along with first star honors.

Game 2 was another strong effort, as the IceHogs controlled the pace of the game on the way to a weekend sweep of Manitoba.

For the second straight game, the Moose scored first, getting the best of Hogs goalie Collin Delia when Brenden Lemiuex redirected a shot by Nic Petan 16:03 into the game. As was the case Friday night, Rockford responded with the next three goals.

The Hogs answered Lemiuex’s goal 2:35 later when Viktor Svedberg intercepted Petan’s clearing attempt in the high slot. Manitoba goalie Eric Comrie made the stop but left a juicy rebound in the front of the net. Tyler Sikura was on hand to knock it into the cage to tie the score.

The Hogs man advantage unit gave Rockford a 2-1 lead 4:45 into the second. Chris DiDomenico gained possession of a puck along the left half boards, skated across the ice into the slot and fired past Comrie’s stick side for the lamp-lighter.

Assists on the goal came from Sikura and Luke Johnson. However, a big part of the scoring play came when Cody Franson lifted the stick of Buddy Robinson of the Moose, allowing Sikura’s ring-around pass to get to DiDomenico.

The IceHogs moved out to a two-goal lead late in the middle frame. Some nice puck work in the corner of the Manitoba zone by Ejdsell and Tanner Kero resulted in Gustav Forsling sliding a cross-ice pass to a waiting Carl Dahlstrom. The one-timer sailed past Comrie for a 3-1 Rockford advantage 16:03 into the second period.

From there, Rockford kept its collective thumb on the Moose offense, killing a couple of Manitoba power plays and limiting scoring opportunities. Andreas Martinsen added an empty net goal in the closing seconds after the Moose went with six skaters most of the last three minutes.

Delia’s effort nabbed him First Star honors for the second consecutive night. Lemieux and Sikura were voted second and third stars. Luke Johnson left after a rough collision with the end boards in the second period, but returned for the start of the third.

Following Game 3 Wednesday, Rockford hosts the Moose for Game 4 Friday night. Game 5 will happen on Sunday afternoon, should it be deemed necessary.