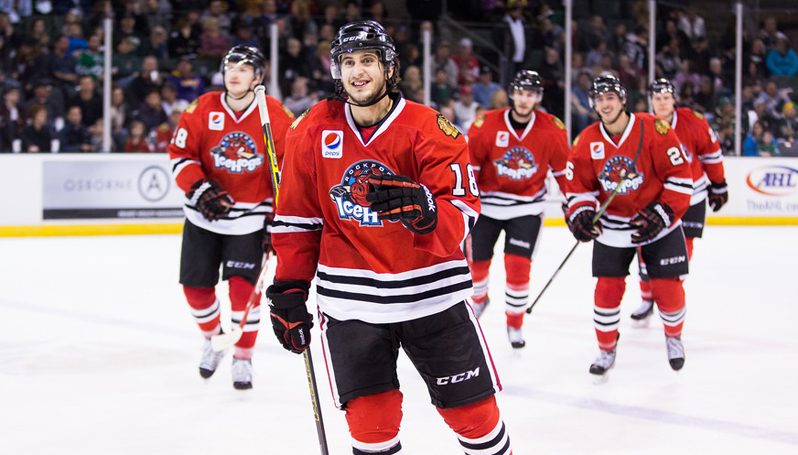 The Rockford IceHogs went down to Texas and swept a pair of games from the Stars last weekend. To have done so in the face of the shake-up to the roster was impressive, indeed.

Recent call-ups and trades by the organization have really changed the landscape for the Hogs, who currently fourth seed in the AHL’s Western Conference. Rockford, just two points behind Grand Rapids in the Midwest Division, has responded well initially to this shuffling of the deck.

AHL eligibility rules prohibit NHL players from participating in the AHL playoffs unless they were on an AHL roster as of the NHL trade deadline. The Blackhawks could have opted to send players down to Rockford for this purpose but chose not to go that route. As a result, no current Blackhawks player will be playoff-eligible for the IceHogs.

Rockford could bring up one of its AHL signings playing in Indianapolis or ink a skater to an amateur tryout deal, but it’s likely that what you now see in the Forest City is what you’ll get when the AHL postseason begins.

Here’s a look at the current IceHogs roster:

This is more about who will not be on the playoff roster, namely captain Joakim Nordstrom and rookie Teuvo Teravainen, who are currently up with the Blackhawks. Those would be two nice players to have for a playoff run but the ship has sailed on that front.

It appears that the sophomore line of Ross, Danault and McNeill is going to have to lead the charge down the stretch. Ross and McNeill have been trading the title of top goal-scorer this season. Danault had three of his own Saturday night in Texas; it’s hard not to think the trio will remain together for most of the remainder of regular season action.

Regin is a veteran guy who needs to step it up as the season winds down. He didn’t score a goal in December or January but does have four points in his last six games. Abbott, obtained from Toronto in exchange for T.J. Brennan, didn’t suit up for Rockford last weekend. He should be in action when the IceHogs host two of the top teams in the conference, possibly on one side of Regin.

Broadhurst hasn’t played since breaking his arm back in late November. His targeted return isn’t until April so it remains to be seen whether he could come back and make a difference in the lineup.

In the last week, Rockford lost its top scorer (T.J. Brennan) as well as its best defender (Klas Dahlbeck) to trades. As a result, this blue line is suddenly short on experience. Only Svedberg, Cumiskey and Miskovic have more than a full season of professional hockey under their belts.

Miskovic, who has been an alternate captain on the road recently, and Cumiskey will serve as the veteran presence. Johns and Pokka now take on a larger share of the defensive responsibilities.

Svedberg hasn’t played in over a month while nursing a foot injury. Gotovets, on an AHL contract with the Hogs, and Fournier should find themselves with plenty of work after being in Indianapolis for most of the season.

van Riemsdyk hasn’t played yet for Rockford and may not see the ice this weekend (UPDATE-Scott Powers tweeted today that he will). He didn’t figure to be around for long, but with Chicago beefing up its defense, the organization could elect to keep the youngster with the Hogs for the season. Justin Holl, on an AHL deal with Rockford, skated Saturday in Texas and was returned to Indy but could be recalled. In addition, 2011 third-rounder Michael Paliotta is finishing his career at Vermont and could be signed after his college season ends.

Scott Darling may be sent down to Rockford in favor of Raanta backing up Corey Crawford at some point, but he won’t be eligible to take part in any postseason action for the Hogs. I doubt that happens, though, as I believe the Hawks have decided that Darling is going to be the backup in net for the next couple of seasons.

How Raanta responds to this demotion will be interesting. He’s basically auditioning for NHL employment next season. Will coach Ted Dent continue to use a platoon between the pipes or give more workload to Leighton? He’s played well this season and I could see him spearheading a playoff run for Rockford.

The IceHogs won a see-saw affair, though it took 6:38 of extra hockey for Rockford to break a tie game with a Pierre-Cedric Labrie goal in Gus Macker time.

Brandon Mashinter got the Hogs on the board by cleaning up a loose puck left in the blue paint. The goal was generated early in the game’s first power play, when Ville Pokka sent a shot on goal. The rebound was knocked into scoring position by Garret Ross for Mashinter to knock across the goal line 8:39 into the contest.

Texas tied the game early in the second period on a Greg Rallo power play goal. Midway through the middle frame, Mark McNeill potted his 15th goal of the season after he took a stick in the face without a call from the officials. Taking the puck from Dillon Fournier behind the Rockford net, McNeil streaked up the left boards and into Stars ice. He then veered across the crease and stuffed the biscuit past Jack Campbell to complete the coast-to-coast tally.

Scott Glennie pulled the Stars even at two goals in the 17th minute and the teams entered the final period at 2-2. At 5:09 of the third, Ross put back a rebound of a McNeill shot from the bottom of the right circle to give Rockford a 3-2 advantage. Alas, the Stars knotted the game back up with just three minutes to go.

Campbell and Michael Leighton traded game-saving saves in the overtime period before Campbell stopped a breakaway attempt by Steven Johns. Late in the 3-on-3 session, it appeared that a shootout was looming before Labrie recovered the puck back in his own zone.

Labrie sent the puck along the boards to McNeill and took a pass back from him as he crossed the Texas blue line. Labrie deked Campbell before tossing a backhand shot against the twine to add the second point to Rockford’s side of the ledger. Labrie, Rallo and McNeill were the game’s three stars.

Phillip Danault’s natural hat trick provided the winning margin for the Hogs as they completed the Lone Star sweep.

Mark McNeill recovered a loose puck, skated to the bottom of the left circle and banked a shot off of Texas goalie Jack Campbell to score 3:42 into the second period. After the Stars tied the game on a power play goal in the eighth minute, Regin came up with a nice pass from Ryan Hartman to notch his own power play tally 11:39 into the second.

Kevin Henderson brought Texas even again with a goal at the 13:57 mark and Travis Morin completed an excellent display of stickhandling to give the Stars a 3-2 advantage 17:13 into the period.

Rockford gained a lengthy 5-on-3 shift near the midpoint of the final period and the Hogs made Texas pay via the scoreboard. Garret Ross scored on a second attempt from the bottom of the right circle to make it 3-3 at the 8:50 mark.

After that, it was all Danault. The second-year center brought the puck out of the Stars zone after a successful penalty kill, entered the offensive zone and sent a shot toward goal from the top of the right circle. The puck glanced off of Campbell and tumbled over his shoulder into the goal with 7:06 to play.

Less than two minutes later, Danault found himself at the right post after shots by Ross and McNeill were turned aside. Danault send McNeill’s rebound past Campbell to make it 5-3 Hogs with 5:13 remaining.

Texas removed Campbell from the crease to attempt a comeback but it only allowed Danault to complete the natural in the waning minutes. A flip of the puck out of the Rockford zone settled in the empty net with 1:18 left to put an exclamation point on the 6-3 victory. Danault rode the productive third period into first star honors.

Huge Weekend At The BMO

Rockford’s new-look squad enters a tough weekend home stand in its next two games. Friday, the Hogs host Oklahoma City, tops in the Western Conference. Saturday night finds the Midwest Division-leading Griffins coming to town. These two games should provide some insight in how this current group fares the rest of the way.