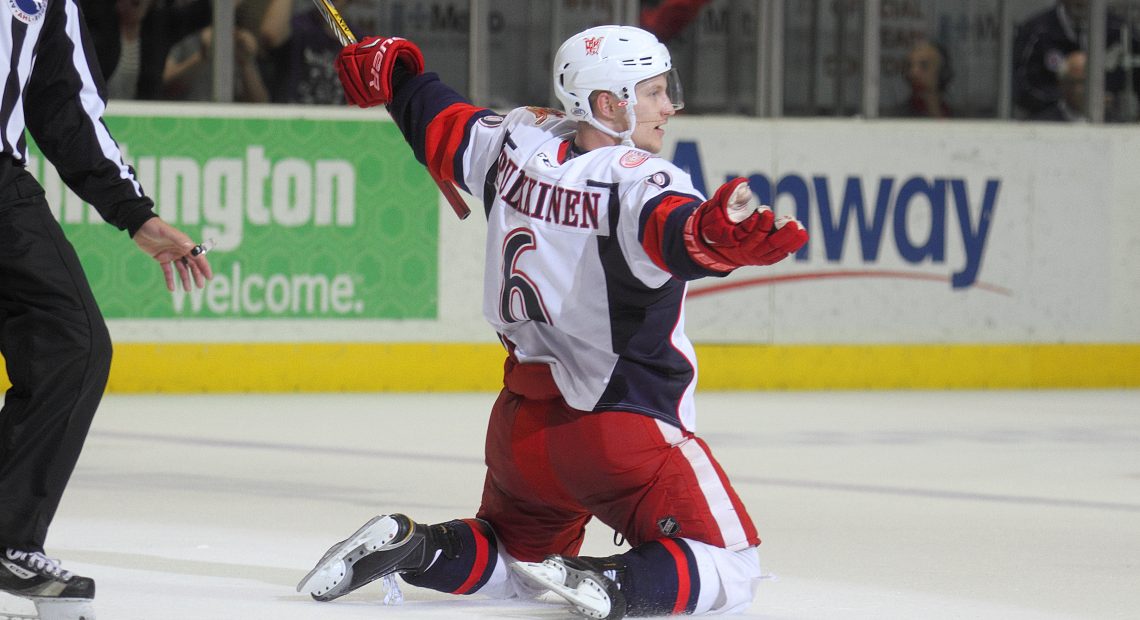 The Rockford IceHogs have hit a postseason roadbump in the second round of the Calder Cup Playoffs. Rockford dropped the first two games of their Western Conference Semifinal in Grand Rapids last week.

Red Wings forward prospect Teemu Pulkkinen was the harvester of sorrow in Games 1 and 2, torching the Hogs for five goals and six points in the two Griffins victories. A strong Grand Rapids showing at home was not unexpected. However, the IceHogs have their work cut out for them as the series shifts to Winnebago County.

Here’s my take on the way the postseason is developing for the IceHogs as they look to hold serve at the BMO, starting with Game 3 Wednesday night.

Rockford fell behind 3-1 in last Wednesday’s Game 1 as Pulkkinen scored twice to break open a tie game in the second period. The IceHogs stormed back behind Stephen Johns, who scored from the left circle in the fourth minute of the third period. A Johns slap shot was redirected into the net by Garret Ross midway through the period and the Hogs were back in business.

The game remained tied until Pulkkinen worked his way into open ice at the right post and one-timed a pass from Tomas Nosek past Michael Leighton with just 2:46 to play. Grand Rapids added an empty-netter to come away with a 5-3 win.

Things started in promising fashion Friday night as Brandon Mashinter took a pass from Spencer Abbott in the slot and banged the biscuit through Tom McCullom’s five-hole 6:18 into the first period. That lead lasted until the 12:26 mark, when Tyler Bertuzzi got off a shot from the left corner of the Hogs zone. Leighton muffed the glove save and the game was tied.

Grand Rapids caught the Hogs napping after a Robin Press turnover in the Griffins zone and Xavier Ouellet lifted the puck out of the zone and across the Rockford blue line. Kevin Porter caught up with it and led a 2-on-1 on Keith Seabrook. Porter threaded a pass to Anthony Mantha for what was the eventual game-winner midway through the sandwich stanza.

The Griffins blew the game open in the final 20 minutes, thanks in part to Pulkkinen. The 23-year-old Finn got behind countryman Ville Pokka and took a stretch pass from Kevin Porter. Leighton was left out to dry and Pulkkinen beat him glove side to make it 3-1 1:36 into the third. Pulkkinen set up Jeff Hoggan at the 7:58 mark for a 4-1 Griffins advantage, then added an exclamation point on the rout with a 5-on-3 power play tally.

Frustrations boiled over in the final minutes. Rockford lashed out several times, reaching an apex of stupidity following the final horn when Pierre-Cedric Labrie attempted to engage several Grand Rapids skaters instead of heading to the locker room. Labrie was given both a 10-minute and a game misconduct for his part in the tomfoolery. Cody Bass (surprise) and Seabrook were also handed 10-minute unsportsmanlike conduct penalties.

Rockford is down a pair but that’s not necessarily a reason for pure panic. The IceHogs showed a lot of poise in rallying in Game 1 and out shot Grand Rapids 37-28 in that contest. Losing their composure was a bit alarming Friday night but it doesn’t mean that Rockford can’t turn the tables on the Griffins when coach Ted Dent has the last line change.

The only power play goal from Grand Rapids came on a 5-on-3. Rockford killed six other penalties, though its own power play was shut out in six attempts in Michigan.

Michael Leighton let in a goal in each game that he’d probably like back, but his performance wasn’t the cause of the two-game hole. McCullom was definitely the better goalie in the first two games, however. If Rockford is to win these next three home games and McCullom remains stingy, Leighton is going to have to raise his game.

Dent has used virtually the same lineup throughout the playoffs, with a few exceptions. Robin Press has been on defense the last four games after Zach Miskovic played in the first postseason game in Texas.

One notable omission from the forward lines is rookie Matt Carey, who appeared in 67 regular season contests. Carey has been a scratch for all five playoff games. Tanner Kero has played in all five of those games.

Dent benched Alex Broadhurst and Dennis Rasmussen for the third period of Game 1. Friday, Broadhurst was scratched in lieu of Dane Walters.

One player who has to look at the thinning of the defense ranks in a positive light is Viktor Svedberg, who is going to be a restricted free agent this summer. Svedberg has been plagued by injuries in his two seasons with Rockford but over the last month has suddenly found himself playing top-pairing minutes with Stephen Johns.

Johns has obviously raised his stock in the organization with his late-season performance. However, it also has been a boon to the 6-9 Svedberg, on whom the Blackhawks need to make a decision in the offseason.

Svedberg’s skating is still not ready for the NHL. He has improved in this area, though. I believe that Svedberg has taken advantage of the increased minutes. He’s turned in some of his better performances since arriving in Rockford in the last couple of weeks.

A month ago, with Svedberg nursing a foot injury, I wondered if he had been able to show the Blackhawks enough to merit another contract. At this point, it’s still hard to gauge his future in the organization. To his credit, Svedberg has been able to showcase his game at a time when he really needed to do so.

Yet Another Slice Of The BMO

As an IceHogs season ticket holder, I am often privy to a lot of discussion by other fans about the way the sales department handles business. Once in a while, I find myself airing a concern or two on this forum. I’m about to air another one, so let me declare this before doing so.

The ticket staff in Rockford is just excellent in terms of the work they do. They are visible at every game and always have time to field the opinions of their customers regardless of how petty they may actually be. They are, in fact, rock stars; kudos to Curtis Tousant, Ryan Woodrow and the rest of the gang for improving their game every season.

Part of the perks listed in the season ticket package for the past few years has been tickets for the first two home playoff games. For the past few years, its been a kind of running joke since we never got to cash in those chips. Of course, that changed this season.

Upon reaching the postseason for the first time in five years, it turned out that the first two home games only kicked in if they both occurred in the first round. Playoff games A and B were free; however Wednesday’s contest with the Griffins is game D (B and C were Games 4 and 5 of the Texas series that were not needed due to the Hogs sweeping the Stars.)

There was a small but persistent amount of grumbling about this, thanks in part to one’s interpretation of the exact words used in the season ticket pitch. I mean, Greg Brady had to take his brother and a bunch of frogs to the drive in along with his girlfriend as a result of being called on the exact words loophole (though he really brought it on himself when he used said loophole to pick up his concert tickets).

Petty? Perhaps. Still, if you say I’m getting two free games, there should be two free games. If you meant first round only, I can live with that. It’s easy to chalk this up to a misunderstanding and move on.

Now, I happened to peruse the current information on 2015-16 season tickets (which can be found here and should be checked out if you live close enough to get to the games because there is a lot to be said of the perks). Down at the bottom, they still advertise free playoff tickets…for the first two games.

Easy fix, guys. Just word it, “Two first-round games included free.” So long as Rockford makes a regular thing of reaching the playoffs and sweeping first-round opponents, it works for me.

Game 3 is pretty close to a must win and takes place at the BMO Harris Bank Center Wednesday night at 7:00 p.m. The Hogs and Griffins come right back for Game 4 Thursday, also a 7:00 p.m. start. A win in either contest guarantees a Game 5, which will be played on Sunday afternoon at 4:00 p.m.