High On The Hog: Love That Home Cookin’ 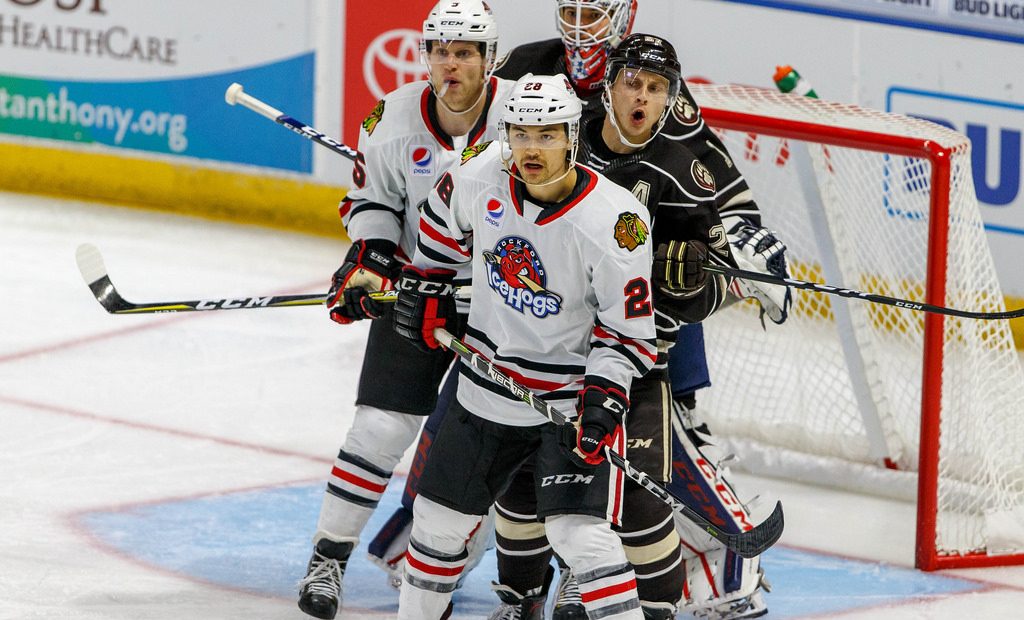 The Rockford IceHogs, AHL affiliate to the Chicago Blackhawks, kicked off their home schedule with style, scoring 10 goals in two victories over Texas and Hershey.

The piglets were on full display this weekend, righting the ship after a 0-2 start in Cleveland to open the season. Here are some of my weekend observations:

The IceHogs rallied in the final period to pick up the season’s first win. A crowd of 4,773 was on hand to watch Rockford in the home opener.

As has been the case in each game this season, the Hogs got on the board first. The goal came four minutes into the contest and was the result of the man advantage. Dylan Sikura got a puck on net that was stopped by Stars goalie Colton Point but settled in front of the crease. Brother Tyler twisted around his defender and backhanded the loose biscuit into the basket for a 1-0 Rockford lead.

Texas responded with a couple of transition goals to go up 2-1. James Phelan got to the left post just before Hogs goalie Collin Delia to knock in a pass from Colton Hargrove at the 7:31 mark. In the last minute of the first, a Jacob Nilsson turnover led to a rush that ended with Denis Gurianov finishing from the left post.

Rockford knotted the game at two goals at 2:27 of the second period when Henrik Samuelsson put a rebound of Joni Tuulola’s shot over the shoulder of Point. Midway though the period, however, Justin Dowling got a stick on a drive by Gavin Bayreuther, changing the trajectory just enough to send it past Delia for a 3-2 Stars advantage.

After misfiring for much of the evening, Rockford began to connect on some passes. This led to a change in the IceHogs fortunes over the final 20 minutes.

Matheson Iacopelli, in his first action this season, tied the game from the left circle after taking a feed from Graham Knott on a 2-on-1 rush to the Texas cage. Iacopelli’s shot glanced off the left post and settled into Twine Town at 11:06 of the third period.

A few minutes later, the IceHogs regained the led on Dylan Sikura’s first AHL goal. It was set up by Nilsson, who gained possession of a rebounding Texas shot in the slot and brought the puck out of the zone and across the red line.

Nilsson hit Matthew Highmore coming into the Stars zone. Sikura handled Highmore’s offering at the top of the left circle, skated to the dot and sent a wrist shot past Point’s glove and into the far side of the net. Rockford now led 4-3 with just under six minutes to play.

Texas pressed hard and had some up close and personal scoring chances that were kept out of harm’s way by Delia, who totaled 34 saves on the night and won First Star honors. The Hogs locked things up in the final minute on a long-distance empty netter by Darren Raddysh.

Rounding out the three stars behind Delia was Iacopelli (Second Star) and Dylan Sikura (Third Star).

The Bears peppered Collin Delia with shots, but the Hogs goalie was up to the task, making 36 saves to help Rockford win its second straight.

Anthony Louis got the Hogs on the scoreboard with his first goal of the season at the 3:30 mark. The play got started when Darren Raddysh took control of the puck at his blueline and hit Tyler Sikura entering the middle of the Hershey zone. Sikura passed to Henrik Samuelsson coming down the right side, who found Louis skating toward the left dot. Pass, shoot, score; Rockford led 1-0.

The Bears tied the game midway through the period on a point shot by Tyler Lewington. Despite being out shot 16-7 in the opening 20 minutes, the IceHogs were all square going into the locker room.

A high-sticking infraction by Hershey’s Mike Sgarbossa led to Jordan Schroeder’s first goal of the season. Schroeder’s one-timer from the left circle found the far side of Ilya Samsonov’s net for a 2-1 advantage for the Hogs at 3:13 of the second stanza. Credit Dylan Sikura with an excellent cross-ice feed to Schroeder.

At 6:56 of the second, Liam O’Brien sent a wrister over the glove of Delia. The game wouldn’t stay tied for long, however.

Rockford regained the lead after Matheson Iacopelli gathered in a loose puck in the slot and skated it back out past the top of the left circle before throwing a shot toward the Hershey net. Samsonov made the stop but failed to gather in the loose puck. Graham Knott was skating across the crease when the puck struck his foot and slid under the Bears goalie at 8:17 of the second.

Schroeder bore down on Samsonov, waiting until he was nearly on top of the crease before sliding a pass to a streaking Broadhurst at the left post. The resulting one-timer made it 4-2 Rockford at 10:21 of the third. Matthew Highmore added an empty-net goal with 1:40 remaining to close out the scoring.

Schroeder was named the game’s first star for his efforts on the afternoon, followed by Delia and Tyler Sikura, who had a pair of assists.

Rockford hits the road for a pair of games with Tuscon this weekend. The Hogs will be in action on Friday and Saturday nights. I’ll have a look at that Roadrunners club on Friday along with other Rockford happenings. Until then, follow me @JonFromi on twitter for thoughts on the Hogs all season long.