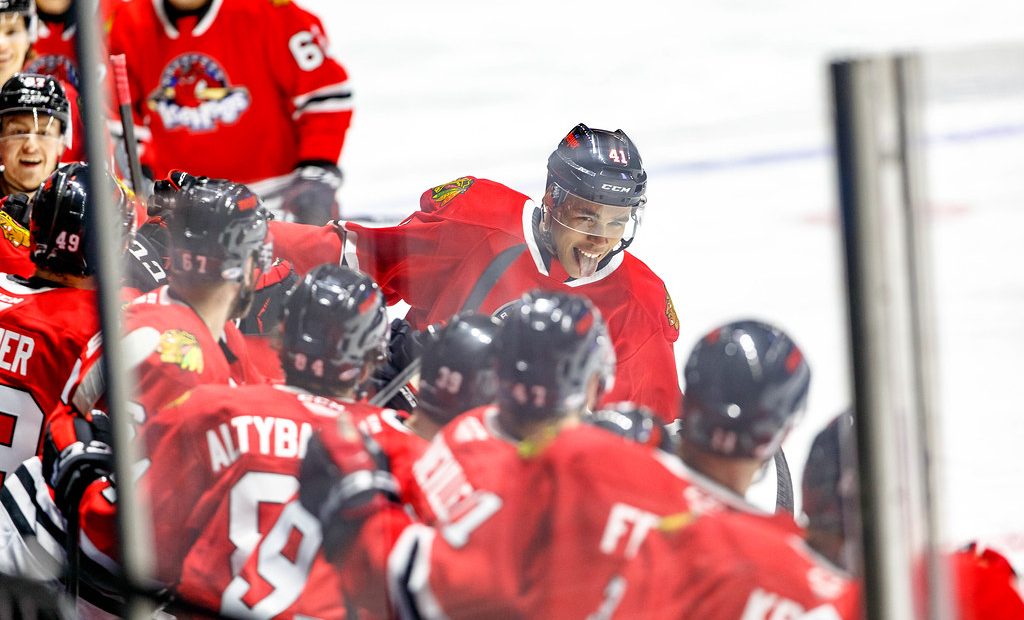 The Rockford IceHogs have set a franchise record for futility to open a season, dropping two games this past week to fall to 0-4-1 on the 2020-21 campaign.

The piglets have been in most of these games. However, the discrepancy in talent is pretty evident.

The IceHogs began a four-game home stand by losing to the Wolves on Tuesday. Thursday night, Grand Rapids came to the BMO and stifled Rockford.

As expected, the IceHogs are struggling to put pucks in the net. The passing and puck skill aren’t up to AHL speed as of yet. For the time being, Rockford is going to have to work hard, put back rebounds, and create traffic in front of nets to create offense.

Rockford jettisoned goalie Scott Darling on Wednesday, releasing the veteran from his PTO. Darling played in one game for the Hogs, giving up five goals in Rockford’s 5-2 loss to the Wolves on February 9.

Defenseman Michael Krutil, who was on an amateur tryout, was released from his ATO, then signed to an AHL contract. Krutil, 18, has appeared in three games for Rockford this season.

The IceHogs also announced on Wednesday that defenseman Anton Lindholm, recently sent to Rockford from the Hawks taxi squad, would be out for four to six weeks with a broken thumb. The IceHogs currently have just seven healthy defenseman on the roster; there may be a real need to sign a couple of players in the coming weeks.

Back on Tuesday, Rockford skated without captain Garrett Mitchell. Mitchell was serving a one-game suspension for a cross-check to the head of Iowa’s Ryan O’Rourke on Saturday.

The IceHogs dug a three-goal hole in the first forty minutes of action. Despite rallying for a pair of goals in the final stanza, the IceHogs fell to the Chicago Wolves for the third time this season. Rockford drops to 0-3-1 after a 3-2 defeat at the BMO Harris Bank Center.

The Wolves quickly went up 1-0 on Anthony Richard‘s quick strike past Hogs goalie Matt Tomkins 1:22 into the game. The scoring play was started by Jeremy Davies hauling in a wayward shot attempt by Rockford’s Cole Moberg. The puck rapidly made its way to Tom Novak, who hit Richard coming into the Hogs zone. Richard finished off a 2-on-1 rush by finding the top right corner of the net.

The IceHogs were nailed with a too many men on the ice infraction midway through the first period. Chicago converted late in the man advantage. Ryan Suzuki did the honors, taking a pass from Richard in the near right circle and one-timing into the open net. The Wolves led 2-0 at the 12:55 mark and took that lead into the first intermission.

Tomkins denied several high-percentage shots from the Wolves in the second period. However, Philip Tomasino got himself open in the slot, taking a pass from David Cotton and driving a shot over the Rockford goalie at 13:32 mark. Rockford came up empty on three power play chances in the second stanza and began the final period down 3-0.

Two goals in the span of 19 seconds midway through the final frame brought the Hogs roaring back into contention. Brad Morrison brought the puck out of the Rockford zone, up the left side, and into the high slot. There, he floated a backhand shot toward net. Just before Wolves goalie Beck Warm could glove the attempt, Chris Wilkie batted it into the net at 7:01 of the third.

On the ensuing faceoff, Wilkie found himself with the puck on his stick just outside the Chicago blueline. He passed to a pinching Issak Phillips, who drove to the net and sent a shot that Warm stopped with his left pad. Phillips, who continued to drive to the net behind his shot, scooped up the rebound and cut the Wolves lead to 3-2 at the 7:20 mark.

The IceHogs kept the pressure on Warm, firing 15 shots on the Chicago rookie in the third period. Despite a frantic push in the final minutes, Rockford was unable to complete the comeback.

Warm stopped 37 of 39 shots on the evening to pick up the win. Tomkins kept the Hogs in the contest with several point-blank saves, finished with 33 saves on 36 shots.

The IceHogs offense was as ferocious as a box of kittens on Thursday, mustering just 13 shots in Rockford’s fifth-straight loss to open the season. Rockford falls to 0-4-1 with the defeat. Grand Rapids improves to 2-2 in the first of eight meetings between the Central Division rivals.

The Griffins came out firing, out-shooting Rockford 8-2 in the opening minutes on the way to a 12-5 shot advantage in the first period. Grand Rapids had several chances in two power plays in the first, only to be nullified by some off-target passing.

The two Central Division rivals traded goals in the second stanza. The Griffins Michael Rasmussen got his blade on a Dennis Cholowski shot just over a minute into a Grand Rapids power play. Hogs goalie Matt Tomkins could only watch as the puck entered the net. The Griffins led 1-0 at the 4:33 mark.

Rockford drew even just after a man advantage of their own expired. Rookie Alec Regula pounced on a rebound of a shot by a Chad Krys shot from the point. Gathering in the puck, Regula beat Grand Rapids goalie Kevin Boyle to the left side of the Griffins net. The score was even at a goal apiece at 13:34 of the second period.

The game remained tied until the Griffins Riley Barber worked his way into an open look from the slot. Taking a pass from Taro Hirose, Barber sent a wrister over the blocker of Tomkins for a 2-1 advantage at 7:13 of the final period.

Rockford had a huge chance for an equalizer midway though the third. However, the IceHogs came up empty on a power play that included almost a minute of a five-on-three advantage.

Tomkins, who stopped 26 of 28 shots in the game, was pulled with 2:12 remaining during Rockford’s timeout. The Hogs lost an offensive zone draw, leading to an empty-net goal by Chase Pearson that made it 3-1 Griffins with 2:01 left.

Rockford is idle this weekend, but have four games with the Cleveland Monsters next week. The Hogs play host to Cleveland Monday and Tuesday, then visit the Monsters on Saturday and Sunday.

I’ll be back with a preview of the Monsters on Monday as the Hogs attempt to pick up that elusive first victory. Follow me @JonFromi on twitter for reports on Rockford throughout the season.