High On The Hog: Leaning On The Vets 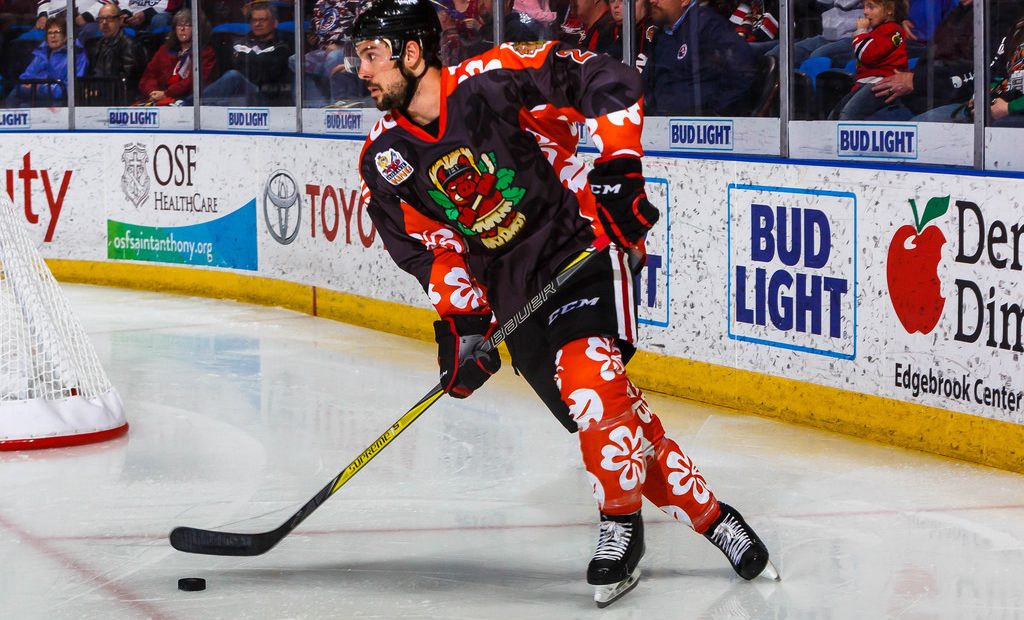 When the 2017-18 season got underway, the Rockford IceHogs were fresh-faced piglets with very little veteran presence. The need for experience, especially up front, was painfully evident despite the talent Rockford sported in the early part of the AHL season.

Over the course of the past few months, the Hawks organization has infused key veterans into the lineup that have the Hogs poised for a return to the postseason after last year’s last-place finish. Here are a few players who have made a big impact on Rockford’s fortunes since coming aboard in the last few months.

Since being sent down to Rockford by the Blackhawks, Franson has six goals and 14 assists in 32 games. He has been a standout on the power play (5 G, 7 A) and has been a key veteran mentor for coach Jeremy Colliton. Over his last 14 games, Franson has 12 points (4 G, 8 A) to go with a plus-eight skater rating.

Franson has been a catalyst on the man advantage, with five goals and seven helpers. His right-handed blasts from the left dot have consistently found twine. In the last seven games, the IceHogs are 8-32 when up a man. Rockford is finally making opponents pay for taking penalties.

In Rockford’s six-point week of action, Clendening had seven points (2 G, 5 A). On Monday, Clendening was named the CCM/AHL Player Of The Week for his efforts. To say the move back to the IceHogs was symbiotic for both parties is an understatement.

Before the trade that brought Clendening to the organization, he had a goal and four assists in 21 games with Tuscon. In 32 games with Rockford, he has 28 points (4 G, 24 A).

The acquisition of Clendening and Franson are a major factor in this late-season success. The defense has two veterans who have teamed up on a lethal power play of late. The blue line runs pretty deep for Rockford heading into any potential postseason action.

Currently on an eight-game point streak, DiDomenico has brought an offensive jolt to the club. In his last ten games, during which Rockford has gone 8-1-1, the 29-year-old forward has five goals and eight apples.

After clearing waivers, the Blackhawks assigned Bouma to Rockford February 26. In 14 games with the IceHogs, the 27-year-old forward has five goals and six assists. His rugged style has helped bring a little more snarl to Rockford’s game.

Goalie Matt Tomkins was brought from Indy up to back up Jeff Glass while Collin Delia and J.F. Berube finish up the season in Chicago. On Monday, forward Nathan Noel was loaned to the Fuel. In 17 games with the IceHogs, Noel had a goal and was a minus-two.

Rockford, now 37-25-4-4 piled up six points in the standings with three wins this week. As of Monday, the Hogs have gone 8-1-1 in their last ten games and sit in fourth place in the Central Division with a .586 points percentage. They have a bit of breathing room over Milwaukee and Iowa below them, while Grand Rapids and Manitoba (both at .606) are definitely within striking distance if the piglets remain hot.

A pair of power play goals provided the winning margin for Rockford. In the first of two games north of the border, Collin Delia and the Hogs were able to subdue the Moose.

The first IceHogs goal came via the man advantage, sparked by a sweet dot-to-dot pass by Chris DiDomenico. Working a give and go with Adam Clendening, DiDomenico skated into the right circle and threaded the puck to Cody Franson at the left dot. Franson’s one-timer zipped past Manitoba goalie Jamie Phillips and snuggled into the ropes at 9:10 of the first period.

Less than two minutes later, Tyler Sikura won an offensive draw and Clendening took possession. Tossing a shot toward goal from the right point, the puck snuck past Phillips and was escorted across the goal line by Henrik Samuelsson for a 2-0 Rockford advantage.

Mason Appleton drew the Moose to within a goal midway through the second, but late in the period the Hogs power play struck again. Clendening took a drop pass from DiDomenico and sent a slap shot to net that Phillips was able to block. The rebound was collected by Sikura, who hooked up rubber and twine to put the Hogs up 3-1 at the 16:59 mark.

Delia preserved that two-goal lead with some fine work in the crease in the last three minutes of the middle frame. William Pelletier provided some insurance midway through the third, capping off a odd-man rush by Darren Raddysh and Luc Snuggerud. Snuggerud’s attempt bounced off the speedy forward and tumbled into the Manitoba net to make it 4-1 Rockford.

The Moose would score at 16:54 but would get no closer as the IceHogs claimed their first victory over Manitoba this season. Delia, who stopped 32 shots, was named the game’s first star, with Clendening nabbing second star honors for his three-apple evening.

For the second time in three days, the Hogs were victorious in Winnipeg, posting four unanswered goals after falling behind 1-0. The win knocked Manitoba out of first place in the Central Division for the first time in several months.

The Moose drew first cord at the 8:51 mark. Former Hogs defenseman Kirill Gotovets sent a puck to net that was redirected by Chase DeLeo and past Hogs starting goalie Jeff Glass. The next half-hour of action was dominated by the IceHogs.

Rockford’s power play had an answer just minutes later. Adam Clendening struck the crossbar with his shot from the right point. Tyler Sikura pounced on the loose puck and put it firmly into the back of the Manitoba net, tying the game at a goal apiece 10:38 into the game.

The IceHogs closed out the opening period with a couple of scores to take command of the contest. After William Pelletier won a battle for the puck in the Moose zone, he sent a pass to Luke Johnson in the corner. Johnson was able to hit the stick of a falling Tanner Kero in front of the net. The puck glanced off of the back of Manitoba goalie Michael Hutchinson and into the cage at 17:14 of the first period.

Up 2-1, Rockford broke out of their own zone a minute later and took a two-goal lead with a nice bit of transition work. Newly returned Matthew Highmore started the play, sliding the puck along the half boards to Sikura. Taking the puck into neutral ice, Sikura hit Clendening crossing the red line. Clendening carried the puck into Manitoba territory, wound up at the top of the right circle and blasted it past Hutchinson at 18:20 for a 3-1 Hogs lead.

Rockford extended the advantage to 4-1 on a Chris DiDomenico wrister from the slot 4:31 into the second. The play was set up by Anthony Louis, who took pass from linemate Lance Bouma and dropped the puck back to the streaking DiDomenico.

Manitoba would creep back into contention with goals by Cameron Schilling late in the middle frame and Brody Sutter with 3:05 left in the game. Glass and the Hogs held on to post Rockford’s third-straight win. DiDomenico and Clendening were the game’s first two stars.

It was a wild kind of luau at the BMO. The Hogs celebrated Hawaiian Night with a huge comeback victory over the Barracuda.

Sloppy play in their own zone cost the IceHogs midway through the first period. Darren Raddysh had a pass attempt broken up as he was trying to enter neutral ice. The puck was collected by San Jose’s Sam Warning, who skated to the net and backhanded a shot past Hogs goalie Jeff Glass.

Rockford evened the score on a power play goal by Adam Clendening. Taking control of Luke Johnson’s faceoff win, Clendening moved to the high slot area and fired past Barracuda goalie Stephon Williams. At 15:38, the Hogs and San Jose were tied at one.

The Barracuda dominated the second period, getting goals from former Hog Brandon Mashinter and Caleb Herbert. Rockford was down 3-1 and in need of some quick offense in the third period. They got it.

Things got rolling in the opening minute of the final frame. Another Clendening blast from the right point was tipped in by Lance Bouma to cut the San Jose lead to 3-2 just 41 seconds in. Ninety seconds later, Henrik Samuelsson was waiting at the right post for Luc Snuggerud to find him coming around the San Jose net. His goal tied the game 3-3 at the 2:11 mark.

Two minutes later, Snuggerud would send a shot toward net that caught the skate of Barracuda defenseman Radim Simek and wound up in the back of the cage. With Rockford now up 4-3, a shell-shocked San Jose club called its timeout.

Upon returning to the ice, the Hogs scored for the forth time in four minutes. This one was an unassisted goal by Matthew Highmore, who picked up a loose puck along the boards, skated to the right dot and stuck one past Williams for a 5-3 Rockford advantage just 4:25 into the third.

That ended the scoring for both teams. The IceHogs rode the momentum of their offensive outburst to a fourth-straight victory. Highmore (first), Clendening (second) and Snuggerud (third) were voted the games three stars.

The Hogs are Lone Star bound this week, with a game Wednesday night in San Antonio followed by back-to-back skates with the Texas Stars Friday and Saturday. 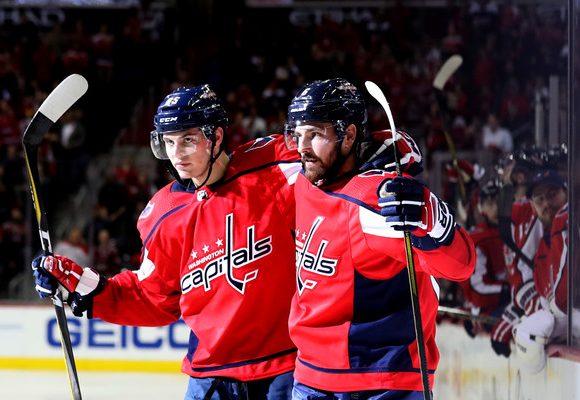 Bury My Heart At Michal Kempny