High On The Hog: Hungry For The Wolves 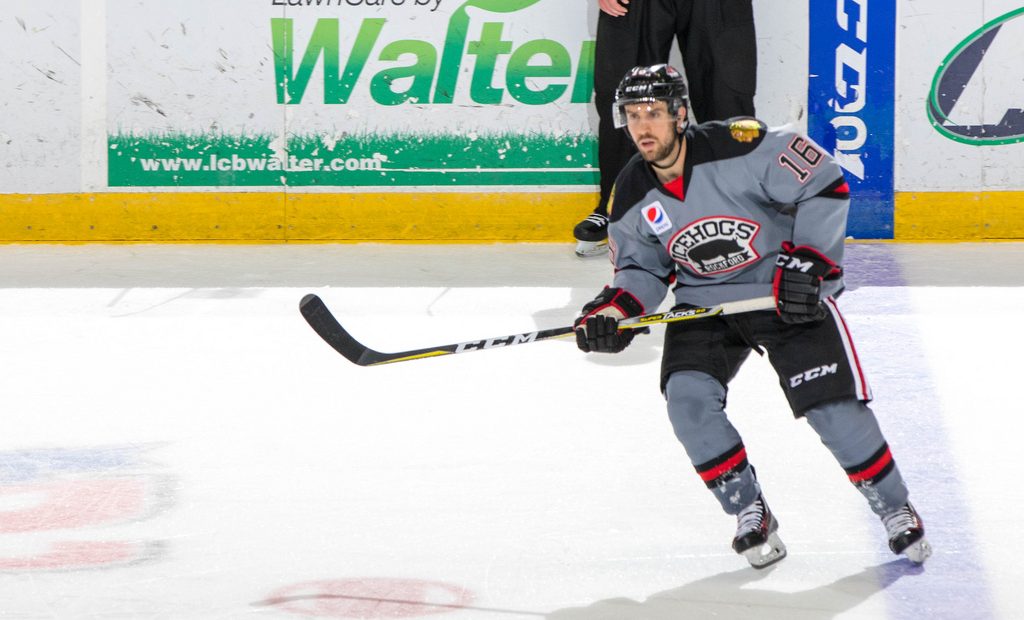 The Rockford IceHogs get to take it easy this weekend…sort of.

The Blackhawks AHL affiliate have just one game on the schedule. Of course, that game is in Rosemont with the Central Division-leading Chicago Wolves, who just happen to be the league’s highest scoring team.

The Hogs visit the Allstate Arena Friday night for another in a steady stream of Illinois Lottery Cup meetings with the Wolves. The two teams have split the first four meetings; after Friday, Rockford will clash twice more with the Wolves before the end of the calendar year.

The IceHogs have won both games in enemy territory: the Wolves have taken both contests at the BMO by wide margins. Coming into this game, Chicago is riding a six-game winning streak.

AHL scoring leader Brandon Pirri (17 G, 24 A) was recalled to Vegas this week, so he won’t be around to torment the IceHogs. Rookie defenseman Erik Brannstrom (4 G, 16 A) is also with the Golden Knights.

Rest assured, Chicago has plenty of other scoring options. Tops on that list is Daniel Carr (14 G, 19 A) , who has been on a tear since being sent back to the Wolves. Carr is currently on a three-game goal streak as well as a six-game point streak. He has 11 points (5 G, 6 A) in six games since returning to the Chicago lineup.

Rockford is still last in the league in terms of offense. They have raised that average to 2.33 goals per game (compared to 3.98 goals for the Wolves), but have failed to break the three-goal barrier in regulation play in 17 of their last 20 games.

Coach Derek King can take solace in the fact that his team has been making the most of its meager output. Rockford is 6-2-1-1 in its last ten games. The Hogs (.567 points percentage) are currently in a tie for fifth place in the division with Grand Rapids.

Rockford has won three of its last four games, including a comeback victory at the BMO Harris Bank Center against Milwaukee. A welcome sight came that night in the form of William Pelletier, who made his season debut Wednesday. The speedy forward was a key contributor throughout last season. Off-season surgery kept him out of action for the first 29 games of the 2018-19 campaign.

Pelletier chipped in with 14 goals and 15 assists last season. His wheels were utilized on the penalty kill as well as at the offensive end, where the Hogs could employ him to chase down dump-ins and avoid icing calls. For a player on an AHL contract, Pelletier had the full confidence of then-coach Jeremy Colliton. He was a mainstay in the Rockford lineup.

Pelletier made an immediate impact in his first game back with the piglets, getting a secondary assist on Tyler Sikura’s goal against Milwaukee. His presence is going to be felt throughout the roster.

It was announced Thursday that defenseman Andrew Campbell has been named a captain of the AHL’s Western Conference All-Star team. The captaincy of both the Eastern and Western Conference teams is awarded by the league in recognition of outstanding leadership and service.

Campbell is not an offensive stalwart. In 24 games with the IceHogs this season, his only mark on the score sheet has been a goal against Manitoba October 28. Campbell has brought some stability to what is a young Rockford defense. With the Hogs penalty kill (85.4 percent kill rate) at sixth in the league and the defense giving up 2.80 goals per game (tied for fifth in the AHL), the 11-year veteran has to be cited as a steadying force on the back end.

Viktor Ejdsell sat out Wednesday’s game with a groin issue. He may be ready to play Friday at Chicago, but King wasn’t certain of Ejdsell’s status following the win over the Admirals.

The IceHogs are the least penalized team in the AHL. Rockford skaters spend an average of 10.67 minutes in the penalty box. Defenseman Dennis Gilbert is third in the league in fighting majors after getting into his fourth scrap of the season Wednesday. He and former Hogs defenseman Sam Jardine are among several players four major penalties.

Rockford has gone into overtime in 11 of its first 30 games. Only Milwaukee (14) and Iowa (13) have done so more often. The IceHogs are 0-4 in games decided by a shootout, having gone 1-10 in shootout attempts.

In one of the more impressive rallies of the season, Rockford dug itself a three-goal hole. The Hogs then climbed out of said hole to post the victory.

The Ads quickly went out to a two-goal advantage. Anthony Richard scored on the power play 1:51 into the game, then doubled that lead on the subsequent faceoff when Jeremy Gregoire sent a shot over the glove of Hogs goalie Anton Forsberg.

Down 2-0 just 2:05 into the first period, things got worse. Milwaukee potted a second power play tally when Tyler Gaudet jumped on a loose puck in front of Forsberg’s net at 13:26.

Late in the first period, Rockford got on the board after Anthony Louis was twice denied by Admirals goalie Troy Grosenick. Jacob Nilsson backhanded the second rebound into the cage at the 19:24 mark. The Hogs skated into the locker room down 3-1.

Rockford was able to cut the lead to 3-2 with a strong second period. Tyler Sikura brought the puck into the offensive zone and sent a pass to William Pelletier, who was making his season debut. Pelletier made a sharp cross-ice pass to Dennis Gilbert at the top of the left circle.

Gilbert’s shot got knocked down in front of the Admirals net, where Sikura completed the scoring play. Throwing the biscuit into the basket at the 9:18 mark, Sikura snapped a seven-game goal drought and got the IceHogs back into the contest.

Rockford made it all the way back 4:20 into the third period after Sikura grabbed a loose puck in the Milwaukee zone and found Joni Tuulola in the high slot. Tuulola sent a pass to Darren Raddysh at the right point. Raddysh’s shot glanced off of the stick of Richard and over the blocker of Tom McCullom, who had relieved Grosenick in the second period, to knot the game at three.

The Hogs capped an incredible effort in Gus Macker Time to claim the third point. Alexandre Fortin picked off a pass attempt along the half boards in his own zone and turned on the jets. With Louis and Jan Rutta in tow, Rockford worked the 3-on-1 rush to perfection.

Fortin and Louis traded passes before Fortin hit Rutta at the left post. The one-timer zipped behind McCullom to bring the evening to a satisfying climax 1:51 into the extra session.

Rutta and Sikura, each with a goal and assist on the night, were the game’s first and second stars, respectively. Pelletier nabbed third star honors. Forsberg made 27 saves, keeping Milwaukee in check until the Hogs could climb back into contention.

Follow me @JonFromi on twitter for frequent commenting on the doings of the IceHogs throughout the season.