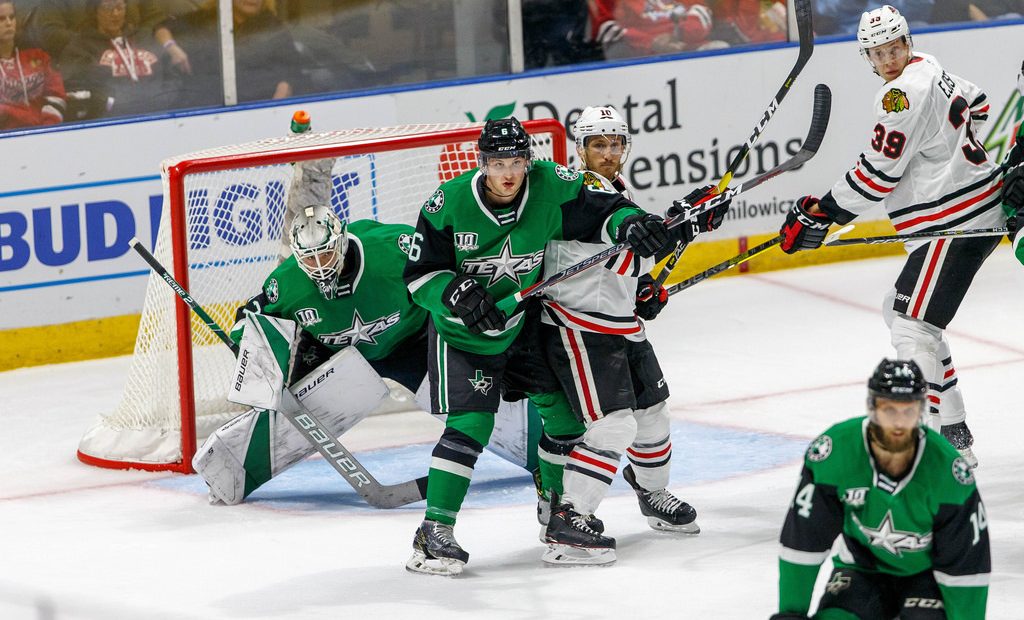 The ‘Bago County Flying Piglets have business in Texas this weekend. Chicago’s AHL affiliate flew to the Lone Star State yesterday and are getting ready for a pair of Central Division contests.

Rockford begins the action in Cedar Park with the Texas Stars. The Hogs travel to San Antonio Saturday to face the Rampage in what will be the first of two games. That second game will be on Tuesday.

This is as good a time as any to visit the IceHogs two southern-most division opponents. Texas is siting at .500 right now and the Rampage are the worst team in the AHL right now. Still, it won’t be a cakewalk for Rockford, who have been missing some key players and are tossing a lot of players into the forward mix.

The IceHogs had another morning game this week, losing 3-1 in Grand Rapids. Rookie Filip Zadina’s two goals were the difference; Jacob Nilsson potted his second of the campaign for Rockford. However, Zadina’s second of the night plus an empty netter by the Griffins in the third period did in the Hogs.

It has become an annual tradition that the IceHogs host a morning game and pack the BMO with school children. Hopefully, young fans are being cultivated due to this practice. It certainly isn’t producing winning hockey.

The IceHogs don’t fare well when playing earlier in the day. Going back to the 2011-12 season, Rockford is 3-9 when playing one of these morning games, whether at home or in another team’s barn. Since the Hogs began hosting a morning game in 2013-14, Rockford is 1-5, including a 3-0 loss to Iowa November 9.

The IceHogs have been a bit better when playing on Martin Luther King Day, splitting their last six games played at 1:00 p.m. in the BMO on that day.

Head coach Derek King confirmed Tuesday that Anton Forsberg, who has been awesome for Rockford since being assigned to the AHL, is managing an illness that necessitated the recall of Kevin Lankinen Sunday night. It will be Lankinen and Collin Delia as the goalie tandem for the road trip.

With two games with the low-scoring Rampage this trip, it might be a good plan to go with Delia Friday against the Stars. Lankinen could face San Antonio the next night, with Delia getting the net Tuesday in the return match. Of course, Delia could well start all three of these games.

Monday, the IceHogs signed forward Nick Moutrey to a PTO. Between Cleveland and Belleville last season, the 6’3” Moutrey had five goals and six assists. He’s another big body to go with the others that have been collected in recent weeks by Rockford.

Connor Moynihan was re-assigned to the ECHL’s Indy Fuel Monday. King was hopeful that this weekend would see the return of forward Jordan Schroeder, who has been out the last nine games.

This will be the second meeting of the season between the two teams that faced off in last spring’s Western Conference Final. Rockford beat Texas 5-3 at the BMO Harris Bank Center back on October 13.

Defensemen Gavin Bayreuther and Joel Hanley are now skating for Dallas of the NHL. The Hogs will get their first look at veteran Taylor Fedun, who Dallas acquired in a trade with Buffalo last week. Fedun is a steady point-producer who has six assists so far in 11 games between Rochester and Texas. Rookie Benjamin Gleason is tops on the blueline for the Stars, with two goals and four assists for the season.

Landon Bow should get the call for the Stars Friday. The third-year goalie is coming off a loss to Manitoba in which he surrendered five goals. Bow has a 3.00 goals against average and a .893 save percentage.

The Rampage are 4-12 thus far. That .250 points percentage is by far the lowest in the league. The problem for San Antonio has been getting pucks in the opposing net, though they did break a three-game skid with a 5-0 win over Manitoba Tuesday night. Jordan Nolan (3 G, 4 A) had a pair of goals in that game.

Rockford beat the Rampage 5-2 back on October 24 behind a 29-save performance by Delia. Four IceHogs poured in four goals in the second period to take control of the game.

Nolan shares the team lead in goals with Klim Kostlin (3 G, 4 A), Trevor Smith (3 G, 2 A) and Ryan Olsen (3 G, 1 A). Veterans Brian Flynn and Chris Butler each have a goal and seven assists to lead San Antonio in scoring.

Jordan Binnington (3-3-0-2, 2.13 GAA, .924 save percentage) shut out the Moose Tuesday and should get at least one start against Rockford. Ville Husso, who gave up four to the Hogs back in the October 24 contest, is scuffling with a 1-9 record, a 3.58 goals against average and an .879 save percentage.

Follow me @JonFromi on twitter for game updates and thoughts on the goings-on in Rockford all season long.