High On The Hog: Delia’s Back, Monsters Postpone 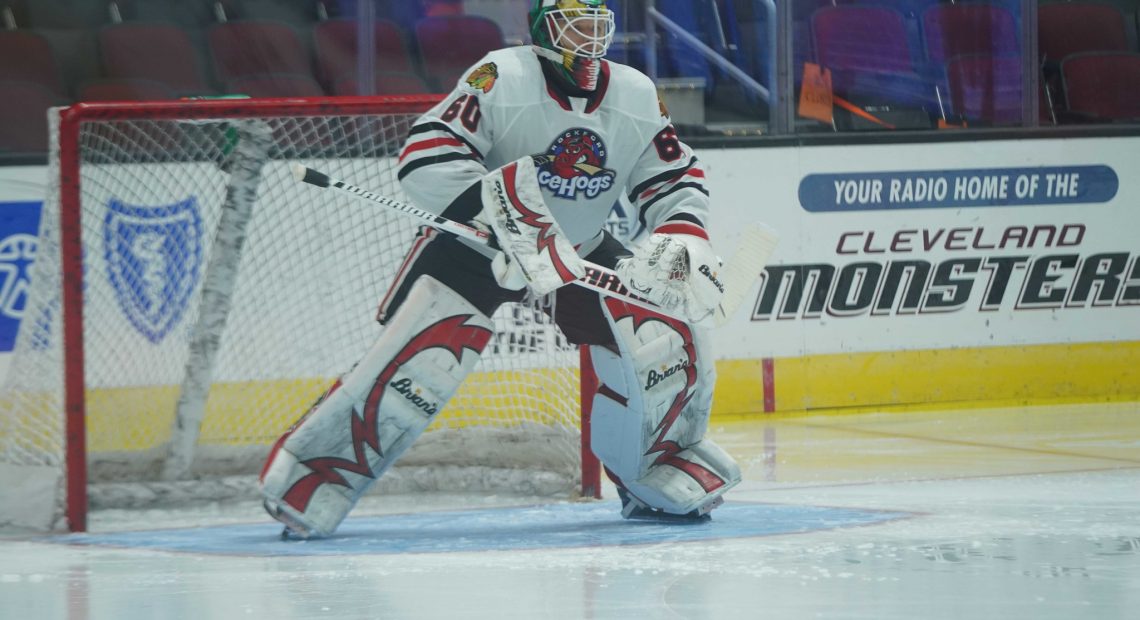 The Rockford IceHogs suffered through a disappointing, abbreviated weekend. Despite an influx of talent from the Blackhawks taxi squad, the piglets dropped the first of two scheduled games in Cleveland Saturday night.

Sunday’s game with the Monsters was postponed less than an hour before puck drop “due to league COVID-19 protocols affecting the Cleveland Monsters”, per an AHL release.

Now, Cleveland had just skated with (and beaten) the Hogs with a depleted lineup the evening before. The Monsters played most of Saturday’s contest with nine forwards and five defensemen, after starting the game with ten forwards and six defensemen.

Columbus sent Zac Dalpe and Ryan MacInnis, the players they recalled on Friday, to Cleveland on Sunday. It was obvious that they were set on playing (and beating) Rockford again…until just before game time.

The Monsters organization enacted a policy before the season that they would provide no specifics pertaining to COVID-related happenings. You will have to read between the lines and assume there was a positive test result Sunday morning. The IceHogs skated with this team Saturday. There could be issues ahead for Rockford in the coming weeks.

With Chad Krys out with and injury, the Hogs are a little thin at defense. Kalynuk and Beaudin slotted right into the Rockford lineup, as did Johnson…and Delia.

On paper, this was the most-talent laden group the IceHogs have iced this season. Cleveland was playing down two (and later, four) skaters, including two of their most experienced centers. The Monsters prevailed, in large part due to the performance of the Cucamonga Kid.

Delia looked like a goalie that hadn’t manned the crease in game conditions for over five weeks. He started slowly, giving up a pair of goals in the first five minutes. He settled down a bit, but still had problems covering loose pucks and was victimized by several shots he appeared to be in position to stop.

Delia has been prone to severe funks throughout his tenure with the organization. His rookie year was looking like a washout before bouncing back to lead the Hogs to the Western Conference Final. Last season, Delia was benched for a month after another poor stretch to open the season. Again, he was able to work out whatever issues that caused the slump.

It would have been great for Delia to get right back on the horse Sunday to begin the process of playing his way out of his current doldrums. For the record, the Hogs should have Delia in net as much as possible on his conditioning assignment.

There are four games scheduled for the remainder of the assignment. Delia should be allowed the chance to pick up some confidence and work out the kinks in his game. If the Blackhawks are serious about player development, Delia should be in net at every opportunity these next couple of weeks.

A short-handed Monsters team was still too much for Rockford at Rocket Mortgage Field House Saturday. Collin Delia did not impress in his first game with the IceHogs while on a conditioning assignment.

Cleveland lit the lamp at 3:04 of the first period on a Nick Lappin strike from the high slot. The score was the culmination of Hogs goalie Collin Delia being on the ice without a stick for nearly ninety seconds. The shot beat Delia to the glove side, giving the Monsters a 1-0 lead.

Lappin would leave the game soon after following a collision with the end boards. The Monsters, who were skating down two forwards already, iced just nine forwards for the bulk of the contest.

Four minutes later, Brett Gallant came off the bench and made a beeline for the slot. Taking a pass from Carson Meyer, who was along the half boards, the veteran forward struck cord for a two-goal Cleveland advantage at the 7:04 mark.

Rockford got on the board 6:25 into the second period. Cody Franson took in a pass along the blueline from Wyatt Kalynuk and tossed the puck toward the net. Monsters goalie Matiss Kivleniecks made the pad save, but the rebound found the stick of MacKenzie Entwistle at the right post. Rubber and twine united, cutting the Cleveland lead to 2-1.

The Hogs got the first man advantage of the evening after Zach Jordan was called for tripping midway through the second period. As the power play expired, Evan Polei hit Jordan with a stretch pass as he came out of the box. The attempt to Delia’s stick side found the back of the Rockford net for a 3-1 Cleveland lead 11:42 into the middle frame.

Late in the second, Delia failed to cover a loose puck at the right post on a Connor McDonald shot. Tyler Sikura was on hand to poke the biscuit across the goal line at the 18:17 mark. Heading into the second intermission, the Hogs trailed 4-1.

Rockford cut the lead to two goals early in the third period. Kalynuk got the scoring play started by hitting Dylan McLaughlin coming across the red line. McLaughlin took the puck hard to the Cleveland net. He lost the handle coming across the crease, but Matej Chalupa was at the right post to finish the play at the 3:20 mark.

Cleveland came right back with a power play goal by Trey Fix-Wolansky at 3:52 of the third. Rockford returned fire moments later when Alec Regula sent a backhand from the bottom of the right circle past Kivleniecks at 5:19 of the period.

That’s as close as things got. Fix-Wolansky got his second power play goal of the night, firing past Delia for a 6-3 Monsters lead with 5:09 remaining.

It wasn’t Delia’s night. He made 24 stops on 30 Cleveland shots and struggled most of the way in his first action in more than a month.

The Hogs power play was fruitless in two chances. The Monsters struck cord on two of their three opportunities.

The IceHogs come back to the BMO Harris Bank Center to begin a four-game home stand. Wednesday night, the Grand Rapids Griffins pay the piglets a call.

Follow me @JonFromi on twitter for game updates, and team news on the IceHogs throughout the season.