High On The Hog: Coming Up Empty At The BMO 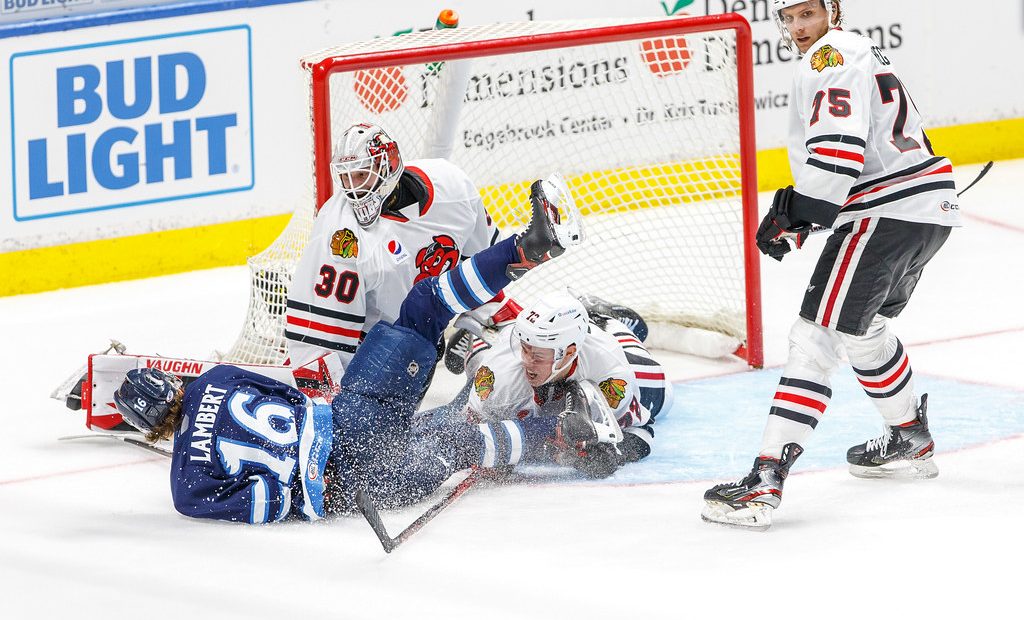 The Rockford IceHogs opened the refurbished BMO Center (note the refurbished name) with a pair of disappointing losses. On Friday, the Chicago Wolves picked up an easy win over Rockford. The next afternoon, Manitoba moved to the top of the Central Division standings behind a half-dozen goals.

What went wrong over the weekend? Allow me to share some thoughts before this week’s recaps.

A rash of penalties in the first two periods was too much for the IceHogs to overcome despite several key scoring opportunities. The Wolves spoiled Rockford’s home opener, beating their Central Division rival in convincing fashion.

Chicago took a 1-0 lead at the 14:28 mark of the opening period, after the Hogs sent an early flurry of pucks toward Wolves goalie Zachary Sawchenko. William Lagesson struck from the left post to give Chicago a lead they would never relinquish.

Rockford had a chance to tie the score when Bobby Lynch was awarded a penalty shot at 16:37 of the first period. Lynch got Sawchenko down on the ice, but couldn’t get the backhand shot over the goalie’s pads.

The Wolves began the middle frame with a short power play held over from a slashing penalty by Hogs defenseman Adam Clendening. Chicago needed just 16 seconds to convert. Jack Drury knocked in a feed by Anttoni Honka for a 2-0 Wolves lead.

The IceHogs closed the gap to 2-1 with a one-timer off the stick of Lukas Reichel. Assists went to Brett Seney and former Wolves forward David Gust at the 14:08 mark.

Seney was called for tripping late in the second period, leading to Brenden Perlini‘s first goal of the season with 51 seconds remaining. Outshot by Chicago 26-16 through 40 minutes, the IceHogs trailed 3-1.

The pivotal point in the final period was near the midway point, when Griffin Mendel and Ryan Dzingel committed penalties 51 seconds apart, leading to a 5-on-3 advantage for Rockford. The Wolves hustled defensively and killed both infractions, ending the Hogs best chance to get back into the contest. Malte Stromwall closed out the scoring with an unassisted shorthanded goal with 1:25 to play, sealing Rockford’s fate.

Hogs goalie Jaxson Stauber made his pro debut Saturday following Arvid Soderblom‘s recall by the Blackhawks. Stauber stopped 19 of 22 Wolves shots. Sawchenko made 27 saves to pick up the win for Chicago.

The IceHogs got off to a solid start, attacking the Manitoba net and scoring the first goal of the game. It came off the stick of Brett Seney, who buried home Lukas Reichel’s feed 4:04 into the game. The Moose surged in the latter stages of the first period, tying the contest at the 18:03 mark. Jansen Harkins gathered in a rebound of Ville Heinola’s initial shot and beat Rockford goalie Dylan Wells to the twine.

Things went south for Rockford five minutes into the middle frame. Jeff Malott put Manitoba up 2-1 at 6:41 of the second period. Eight minutes later, Henri Nikkanen scored to put Rockford into a two-goal hole. The wheels came off for the IceHogs in the final five minutes of the second.

Two Rockford penalties gave the Moose a chance to put the game out of reach. They did just that, needing just seven seconds to convert on a Buddy Robinson interference penalty. Declan Chisholm sent a slap shot past the glove of Wells at 15:29 for a 4-1 Manitoba advantage.

Shortly thereafter, Reichel sent a puck over the glass for a delay of game penalty. At 17:09, Kevin Stenlund scored his second goal of the season and put the IceHogs down 5-1 heading into the second intermission.

Rockford was able to mount a response in the third period, picking up a Luke Philp goal and Seney’s second of the game, sandwiched around a Mikey Eyssimont tally for Manitoba.

Seney’s two-goal night earned him First Star honors in a losing effort. Eyssimont had a goal and two assists in being named Second Star. Reichel was Third Star on the strength of two assists. Heinola also recorded two helpers in the contest.

Wells had a rough night, giving up five goals on 21 shots before being lifted for Jaxson Stauber to start the third period. At the other end of the ice, rookie Oskari Salminen went to 3-0 on the season with the win, with 28 saves on the afternoon.

Rockford continues what is to be a seven-game home stand this weekend. The Wolves come back to play another Illinois Lottery Cup game Friday night. The Belleville Senators come to the BMO Center on Saturday.