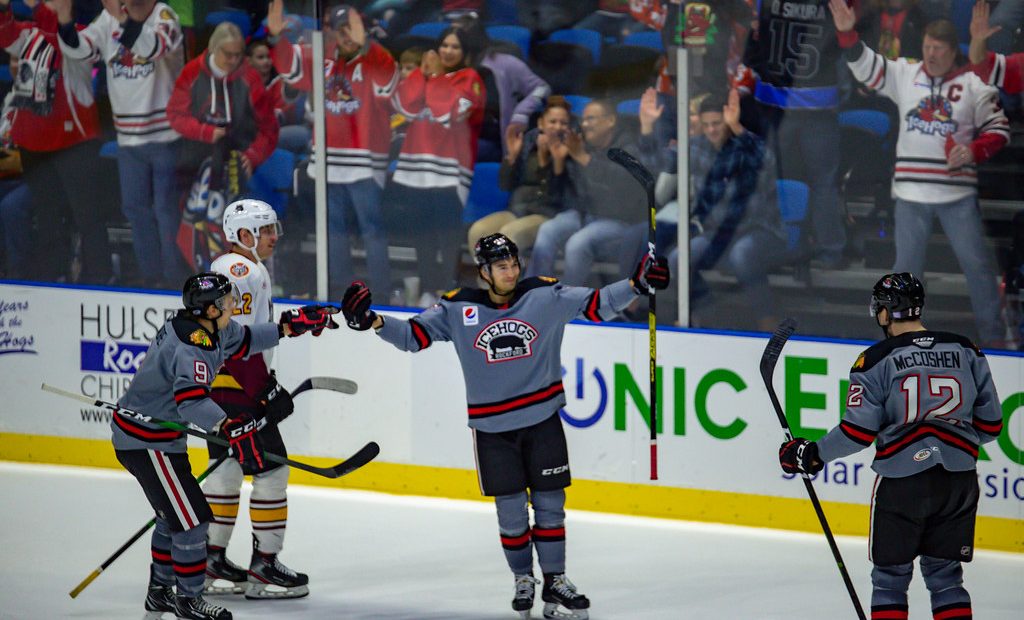 The Rockford IceHogs showed off a can-do attitude over the weekend, snatching victory from the jaws of defeat in back-to-back games. The resilient piglets continued their winning ways at the BMO Harris Bank Center, beating the Iowa Wild Saturday and the Chicago Wolves the following afternoon.

The Hogs (5-5) are still in the bottom half of the Central Division standings. However, Rockford has won three in a row, potted 16 goals in that span, and leapfrogged over Texas to claim the sixth spot with a .500 points percentage.

Dylan Sikura is now leading the team in scoring after a four-point night Saturday. Sikura the Younger, who posted a hat-trick in a furious comeback against the Wolves Sunday, has six goals and three assists on the season.

Right behind Sikura on the leaderboard is Sikura the Elder. Tyler’s fifth goal of the season tied the Wild Saturday, allowing Matthew Highmore (2 G, 5 A) to win it in overtime. Both Tyler Sikura and Highmore  have seven points for Rockford and are on three-game point streaks.

Jacob Nilsson (2 G, 4 A) also has points in each of the last three games, as does D Philip Holm. Forward Anton Wedin (2 G, 4 A) collected three apples in Sunday’s wild victory over Chicago.

Kevin Lankinen made a second consecutive start Saturday, with Collin Delia between the pipes Sunday. Matt Tomkins is still up with the Hogs, though I would think he’ll be sent down to Indy to start getting some steady work in net.

It was a case of late being better than never for the Hogs, who came back from a two-goal deficit in the waning moments of regulation and swiped two points from the Central Division-leading Wild.

Iowa took a 1-0 lead midway through the first period on a Kyle Rau goal. Colton Beck went coast-to-coast for a power play goal late in the second period.

As the third period ticked away, there was little to suggest that Rockford would be getting back into the contest. However, Hogs goalie Kevin Lankinen was called to the bench and the gambit paid off, big time.

Lucas Carlsson sent a one-timer from the right circle past Mat Robson with 2:30 remaining. After Iowa iced the puck on a long-distance attempt at the empty net, Rockford won the resulting faceoff in the Wild zone. Carlsson was in nearly the same spot on the ice when Philip Holm’s pass found his stick. The shot was redirected by Tyler Sikura and into the Iowa net to tie the game with 2:02 left, sending the game into Gus Macker Time.

Lankinen stopped three Iowa shots in the extra session, keeping the IceHogs in contention until Matthew Highmore nabbed a Wild shot attempt that was blocked by Nicolas Beaudin and came off the end boards. Highmore started a two-on-one rush with Beaudin and sent a laser under Robson’s glove from the top of the right circle. The game-winner came 3:45 into overtime.

Lankinen made 30 saves to post his second win in a row. The game’s three stars were Highmore, Tyler Sikura and Carlsson.

Dylan Sikura posted a hat trick with all three goals coming in a furious IceHogs rally. In all, Rockford put up five goals in the final ten minutes of action for a third-straight victory.

The Wolves built a 3-0 lead on goals by Zach Whitecloud, Lucas Elvenes and Jimmy Schuldt. The IceHogs countered with a Jacob Nilsson tally on the man advantage at 8:27 of the second period. Reid Duke made it 4-1 a few minutes later before MacKenzie Entwistle scored at the 10:51 mark.

Rockford was still down 4-2 midway through the final frame when all hell broke loose. Things got started on the power play, with Sikura the Younger zipped a Lucas Carlsson pass past Chicago goalie Oscar Dansk. The goal cut the Wolves lead to 4-3 10:41 into the third.

Just 1:25 later, Brandon Hagel tied the game with his first goal of the season. Ninety seconds later, Sikura gathered in a Matthew Highmore pass at the right dot and flung it over the glove of Dansk to put the Hogs up 5-4 at 13:37 of the third.

Rockford did not take its foot off the gas. Tyler Sikura won control of a loose puck behind the Wolves net, skated to the right post and found Dylan in the slot to cue the caps. Reese Johnson added an empty-netter in the final minute for the coup de gras.

Collin Delia stopped 21 of 25 Chicago shots, though he kept the Wolves at bay for the final 30 minutes of action to allow his teammates the chance to storm back in the third. To the surprise of no one, Dylan Sikura was voted the game’s first star, followed by Anton Wedin and Nilsson.

The IceHogs drop the puck on an 10:30 a.m. tilt with the Toronto Marlies Wednesday. The piglets don’t usually fare well in these affairs, but they will be trying to extend the win streak to four games. Rockford will close out their home stand on Friday night, when the Manitoba Moose come to the BMO.

Follow me @JonFromi on twitter for updates and opinions on all things Rockford IceHogs throughout the season.