High On The Hog: Banged Up 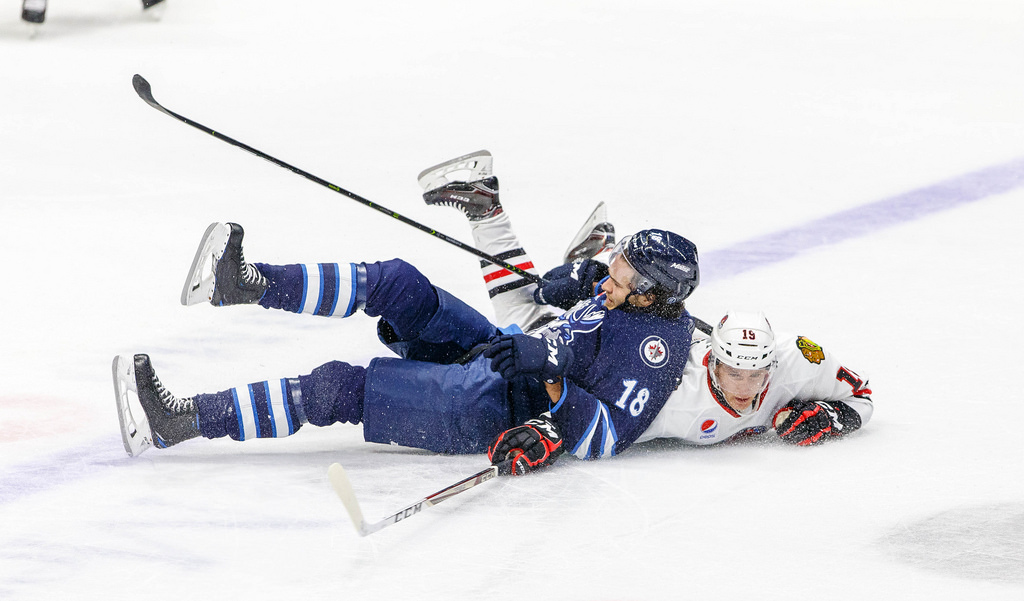 The Rockford IceHogs suffered through a frustrating weekend at the BMO Harris Bank Center. They also may have lost more than a couple of hockey games.

The Blackhawks AHL affiliate competed hard with Cleveland and Manitoba, only to come out on the short end of back-to-back games. The IceHogs could manage just two goals in the two games, dropping a 2-1 decision to the Monsters, then falling in a shootout by that same 2-1 score to the Moose.

It’s safe to say that Rockford finished play this weekend a little banged up. There could be some roster moves necessary after two key skaters left Sunday’s games with injuries.

Defenseman Carl Dahlstrom suffered a groin injury early in Sunday’s game. He left the ice after skating his last shift in the sixth minute and did not return to action.

Late in the second period, Matthew Highmore took a spill after circling the puck around the Manitoba zone. He landed awkwardly and appeared to injure his right shoulder. After a visit from the trainer, he was led to the locker room. Highmore also did not return to the game.

The IceHogs skated with 11 forwards in both games this weekend, due to an injury to Jordan Schroeder. The nature of his injury was not disclosed, though it was thought to be minor enough that Schroeder would be ready to play moving forward.

Hogs coach Jeremy Colliton commented on Schroeder’s absence from the power play, which went 1-8 on the weekend, struggling at times to get set up in the offensive zone.

There are currently 13 forwards on Rockford’s roster. William Pelletier has not played yet this season after a very productive rookie campaign. Colliton did not seem to have a definite answer for when Pelletier would be ready to join the lineup.

“He’s out,” Colliton said. “I’m not sure, like, down to the week but it’s definitely weeks. We’re in the months situation.”

It could be a while before Pelletier is skating again. If Highmore is going to miss substantial time, there should be a call-up sometime this week. With four days between the Manitoba game and Friday’s match up in Milwaukee, we’ll have to see as to the extent of the Hogs injury woes.

The IceHogs were in this game until the end. Cleveland, however, won for the third time in as many tries against Rockford.

The pace was certainly rapid to begin the contest. Rockford had several quality scoring chances turned away by Monsters goalie Matises Kivlenieks. Cleveland gained a 1-0 advantage late in the first period. A holding penalty by Dennis Gilbert led to a Zac Dalpe put back of a rebound at the 19:08 mark. Dalpe was on the spot to gather in the initial shot by Mark Letestu.

The score held through the second, which saw Rockford go 0-3 on the man advantage. The Hogs also killed off nearly two minutes of 5-on-3 time to keep the deficit to a single goal.

The Rockford power play managed to tie the game in the third after Blake Siebenhaler slashed Terry Broadhurst behind the Monsters net. Viktor Ejdsell took a pass from Carl Dahlstrom at the left point. His drive found its way past Kivlenieks to tie the score 6:58 into the period.

Both teams had chances to break the tie. That didn’t happen until Paul Bittner gathered up a Gabriel Carlsson shot that had come off the right post. Bittner scored at the 15:27 mark to make it 2-1 Monsters.

The Hogs pulled starting goalie Anton Forsberg, who stopped 25 of 27 Cleveland shots, in favor of a sixth attacker in the closing minutes. This created some excitement around the Monsters net as the final seconds ticked away. Ultimately, the sands of time ran out on the piglets.

Rockford forced extra skating to earn a standings point but came up short on penalty shots, losing its second game in a row.

After a scoreless first period, both teams found their way to the twine in the middle frame. The Moose took a 1-0 lead after a dump-in knuckled over the head of Hogs goalie Collin Delia. The puck settled behind the net, where Felix Girard won control. Girard slid a pass to Tye McGinn in the slot; the ensuing shot was sent over Delia’s glove at the 10:18 mark.

The Hogs evened things up late in the period after Manitoba’s Sami Niku caught the left post on a shot attempt that would have given his team a two-goal advantage. The puck was sent around the end boards, where Lucas Carlsson took possession long enough to hit Tyler Sikura about to skate out of the Rockford zone.

Sikura skated the puck to the Moose end of the ice, sending a shot that was stopped by Manitoba rookie Mikhail Berdin. The rebound came back out to defenseman Andrew Campbell, who had joined the rush, and the put back at 17:50 made it a 1-1 game entering the second intermission.

Neither Delia or Berdin yielded a goal for the remainder of regulation. Rockford held firm in Gus Macker Time, killing off a 4-on-3 Moose advantage for the last 1:23. Unfortunately, Berdin was one stop better in the shootout. Seth Griffin’s second round goal was the difference.

Rockford shooters Viktor Ejdsell, Anthony Louis and Dylan Sikura were all denied by Berdin, who nabbed First Star honors with a 35-save performance in his first AHL game. Delia (36 saves on 37 shots) and Campbell rounded out the three stars.

The piglets have their first three-in-three of the season this weekend. On Friday, the Hogs visit Milwaukee for their first meeting of the season with the Admirals. Saturday, Rockford hosts the Iowa Wild before traveling to DesMoines for a Sunday afternoon tilt.

Follow me @JonFromi on twitter for game updates, news and thoughts on the IceHogs all season long.