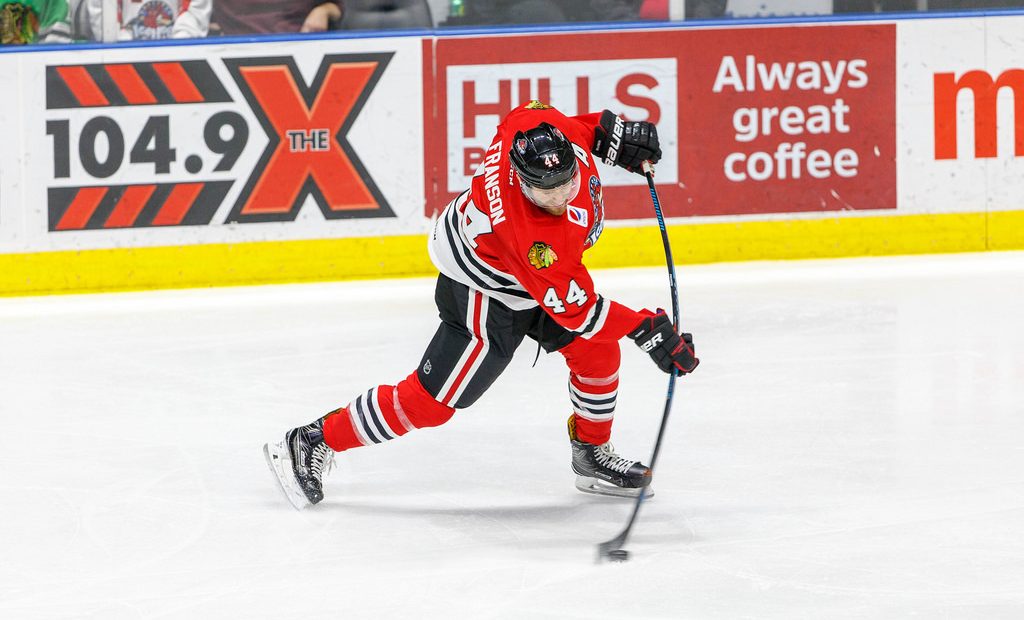 The Rockford IceHogs provided a sneak peek at what’s in store for the next couple of months with the commencement of Rockford’s sole preseason tilt with the Chicago Wolves. These are two AHL franchises with diametric philosophies that were on full display at the Wolves practice facility in Hoffman Estates.

Rockford is approaching the upcoming four months as an extended prospect camp. The Wolves, as usual, are playing to win, Calder Cup or no Calder Cup.

The little campers went down to a 6-1 defeat, though Rockford did score the first goal of the contest. All I can say is…get used to it, kids.

With a shortened schedule coupled with the likelihood that the BMO Harris Bank Center will be largely fan-free, this shall be the way for Rockford. As I said earlier this week, this is completely understandable. The top prospects are tied to the bottom of the Blackhawks roster and the taxi squad. A lot of teams are taking similar approaches to the upcoming season.

Coach Derek King and his staff have another week to get this year’s crop of prospects ready for action. How will they fare against their Central Division opposition? Chicago, Grand Rapids, Iowa, and Cleveland have a bit more experience throughout their lineups than Rockford, which could mean trouble. Expect the piglets to take some lumps, especially in February and March.

Let’s complete our look at the IceHogs roster, beginning with the forwards.

Every season, I lament the lack of scoring punch in the IceHogs lineup. This year, it could be even worse if no one steps up. There are a lot of potential goals lost on the Blackhawks taxi squad, so there are jobs to be earned in Rockford by players who can fill the net.

There are five Hawks prospects set to begin their first professional seasons, topped by their two third-round picks from 2017. Evan Barratt spent three seasons developing his game at Penn State. Andrei Altybarmaykan spent most of that time in the KHL, where he posted 17 points (6 G, 11 A) in 49 games with HK Sochi last season.

Matej Chalupa was signed last May and will be making his North American debut with the IceHogs. Fellow Czech Michal Teply joins him in Rockford. Teply skated for Winnipeg in the WHL last season, scoring 63 points (29 G, 34 A) in 53 games. Look for Teply to be one of Rockford’s offensive threats as he attempts to improve his skating.

Cam Morrison was originally a second-round pick of the Avalanche who became a free agent after his college career at Notre Dame. The Blackhawks signed him to a two-year entry deal. Morrison should get the chance to show his potential as a power forward.

Returning NHL contracts start with John Quenneville, who cleared waivers and was assigned to Rockford. Quenneville is one of the few forwards on the current roster who can be counted on to score. He’s been a consistent 30 to 40-point scorer throughout his four years in the AHL.

Two returning players with a lot to prove are Mikael Hakkarainen and Tim Soderlund. Neither player got a lot of playing time with the IceHogs last season. Hakkarainen, a fifth-round pick by Chicago in 2018, was injured to begin the season and played in just eight games between Rockford. The Finnish center will be looking to make a bigger impact; he should get that chance with fewer players ahead of him on the depth chart.

Soderlund also didn’t get many chances to show off his wheels in Rockford. He had a goal and two assists in 29 appearances with Rockford and I liked what I saw of his forechecking game. During the fall, Soderlund was loaned out to Almtuna IS in Sweden’s second-tier league. He was really good there, with 10 goals and six assists in 23 games.

Soderlund has the type of game that could make him a fan favorite if he could get the puck into the net on a regular basis (and also if there were fans at the games). He’ll have to show that he can produce offensively at higher levels, but should get plenty of chances to do that with the Hogs.

Brad Morrison comes to Rockford from the Kings in the Ollie Matta trade. He spent the previous season in the ECHL, skating in 17 games with Fort Wayne. In that time, he had six goals and seven assists.

The IceHogs signed eight players to AHL contracts in the offseason. Many of those players should make the roster. Garrett Mitchell is a long-time AHL veteran who was signed to mid-season PTO after Rockford was dinged up. He closed the season with an A on his sweater and earned a contract with the IceHogs. Mitchell is my odds-on favorite for team captain.

Gabriel Gagne is another pickup from last season that should see regular playing time. Gagne has an effective shot and could be a force on the Hogs power play. Dylan McLaughlin and Matthew Thompson also saw time in Rockford and could wind up with regular bottom-six minutes.

New faces signed by the IceHogs include D.J. Busdeker, who was one of three players assigned to the Indy Fuel by Rockford to begin the ECHL season. The right wing had four points (2 G, 2 A) in seven games with the Fuel. Also skating for Indy was Riley McKay, who was scoreless in five appearances.

Mitchell Fossier was signed to an AHL deal after a four-year college career at Maine. He was captain his senior year and had 42 points (10 G, 32 A) in 34 games.

Christopher Wilkie put up a 23-goal season in his final year at Colorado College and will be looking to make his pro debut with Rockford. Chad Yetman was selected in the sixth round in the 2020 draft by Chicago. He’s on an AHL contract looking to make an early impression on the Blackhawks. He was a big goal scorer in juniors (43 for the Erie Otters last season) and could find a spot in the lineup.

The Hogs blueline will feature a lot of size but also a lot of inexperience. Like the forwards, there are a lot of openings in the regular lineup.

Cody Franson, currently on an AHL contract with the IceHogs, will be the de facto leader of this group. Franson will provide solid two-way play in Rockford and displayed a lethal one-timer while helping the Hogs to the Western Conference Final back in 2018. Franson will likely wind up pairing with several of the young defensemen on the Hogs roster.

Anton Lindholm is an experienced AHL defenseman that can help bring pucks out of his own zone. He hasn’t made a big impact on the scoreboard in his four years in the Avalanche organization. However, he does have 164 games of AHL action for San Antonio and Colorado. Rockford should benefit from that experience.

On Thursday, the Blackhawks signed 25-year-old Madison Bowey to a two-year contract and placed him on waivers. Should he clear, which seems likely, Bowey provides another experienced piece on the Rockford blueline, having skated 113 games for the Hershey Bears. He has 154 NHL appearances with Washington and Detroit; he should provide some offense from the point for Rockford.

Chad Krys has a lot to prove after a middling rookie campaign for the Hogs in 2019-20. Krys potted the only IceHogs goal on Wednesday in that 6-1 loss to the Wolves. He should get more of a chance to showcase his game and needs to take advantage.

Alex Regula is the prospect to watch in Rockford now that most of the organization’s youth is up in Chicago. Regula is coming off of a junior career with the OHL’s London Knights, capped off by a 27 goal, 33 assist effort in 56 games last season. One of the bigger stories to watch in Rockford this season is how the 6’4” Regula adjusts to the professional game.

Jack Ramsey was signed to an AHL deal this spring and will compete for a spot in the lineup. Another defenseman with size, the 6’3” former Minnesota skater spent all of last season with the Indy Fuel, where he totaled two goals and eight helpers in 46 games.

Dmitry Osipov brings physical play to the mix. He got steady playing time for Rockford as the 2019-20 season progressed. He skated in 28 games for the IceHogs and should see regular minutes.

Rockford also signed several recent Blackhawks draft picks to tryout agreements heading into the season. Cole Moberg, a seventh-rounder from the 2019 NHL Draft, is on a PTO with the Hogs. Michael Krutil and Issak Phillips, Chicago’s fourth and fifth-rounders from the 2020 NHL Draft, are getting the opportunity to play AHL hockey on amateur deals.