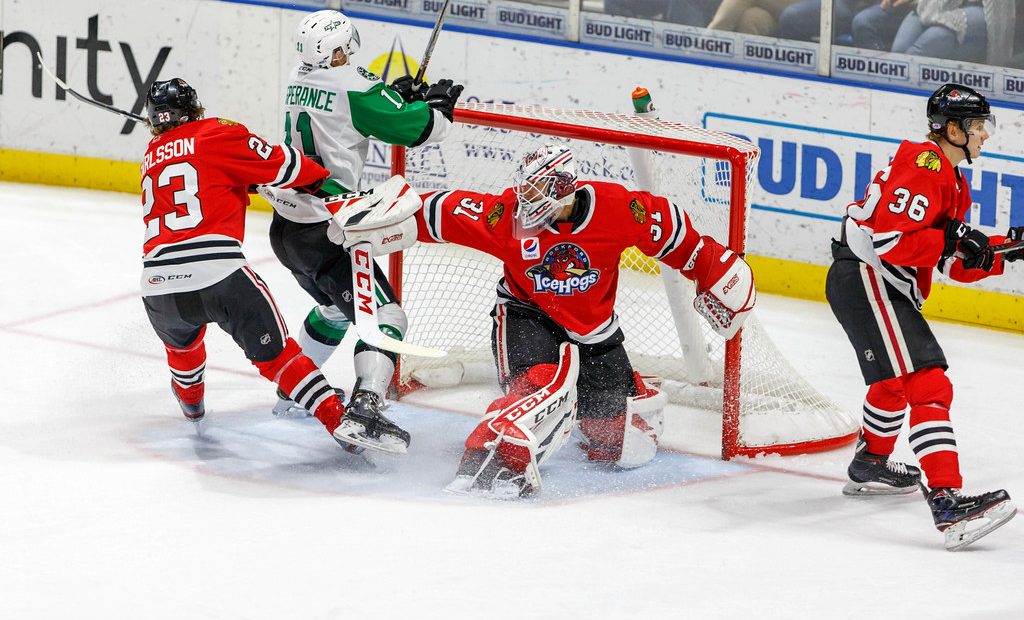 The Rockford IceHogs, American Hockey League affiliate of the Blackhawks, are getting underway with training camp for the 2020-21 campaign on Monday. With the season set to kick off on February 5, the ‘Bago County Flyin’ Piglets once again take to the BMO Harris Bank Center to do battle with the other teams of the AHL.

Sort of. The schedule is cut down to 30 games, the opponents are cut down to four, and the roster…well, we shall address that in just a bit.

Derek King is back for his second full season at the helm of the IceHogs. He’s 58-55-3-6 since taking over for Jeremy Colliton early in the 2028-29 season. King will be working with a lot of new faces, as is per usual for Rockford.

How much do the IceHogs have returning from the 2019-20 campaign? Let’s take a look at the stat sheet.

Starting at the top of the list of last season’s top point scorers in Rockford:

Forward John Quenneville, sixth in team scoring with 13 goals and nine helpers, has been assigned to Rockford. I could continue down this list, but it gets a little too dire for me to have to write. Only the 14th (AHL contract Gabriel Gagne) and 20th (Chad Krys) of the Hogs top scorers join Quenneville in Rockford. In all, the Hogs have just ten skaters who saw action with Rockford last season heading into training camp.

The taxi squad delivers quite the blow to the IceHogs offensive potential. Brandon Pirri, who has cleared waivers, is an AHL scoring machine but may or may not be assigned to Rockford. Entwistle and Carlsson are returning prospects who could both be expected to improve upon previous AHL efforts.

Even with players like Hagel, Phillip Kurashev, and the aforementioned taxi squad skaters, the Hogs would be hard-pressed to qualify as even an average offensive squad. This is a team that struggled to put three goals on the board last season.

Rockford should not expect the same influx of top-end prospects. The IceHogs cupboard is bare. In terms of AHL game experience, the piglets are dead last of the 28 teams set to begin the 2020-21 season. (Springfield, Charlotte and Milwaukee opted out of play for 2020-21.)

Doubling down on young prospects is the way the Hawks organization has decided to play this shortened AHL season. A team wanting to compete this year could snap up several impact players even at as the AHL approaches its startup date. Many teams, including Rockford, are passing on the solid AHL talent still out there, probably due to financial reasons.

Like a lot of teams around the league, the IceHogs will begin play in an empty BMO. That may be the case for the bulk of the 30-game schedule. Little or no revenue coming in and no plan for a postseason make this an understandable, if a less than optimal, path moving forward.

On the other hand, a lot of young players who may otherwise have no shot at steady AHL minutes have been afforded a small window of opportunity. A slew of them could be skating for Rockford.

As previously stated, Rockford has a 30-game slate. The Hogs are in the six-team Central Division, though they have no games scheduled with the Texas Stars. Rockford’s action this season is comprised of dates with the four remaining Central Division teams.

The Hogs have ten games with the Iowa Wild and eight apiece between the Chicago Wolves and the Grand Rapids Griffins. Rockford also has four match-ups with the Cleveland Monsters, who visit the BMO for a two-game set February 5 and 6 to kick off the season.

Fans will not be allowed into the BMO to begin the season. That could chance later in the spring, though the schedule makers did Rockford no favors in this regard. Ten of RFD’s first 16 games, through the end of March, are at home. Starting in April, the Hogs have just five home dates in their remaining 14 games.

Let’s begin our look at the team that could awaiting the puck drop against the Monsters February 5 with a look at the crease.

With the NHL required to keep three goalies on the roster/taxi squad, the only net-minder under contract to the Blackhawks currently eligible to skate for the IceHogs is 26-year-old Matt Tomkins. Tomkins is in the last year of a two-year contract he signed in the middle of the 2019-20 campaign.

Despite being signed to NHL ink by Chicago, the organization hasn’t really given Tomkins a lot of playing time. He seemed to have earned a contract with strong play in nine starts in the first half of the season when Collin Delia was struggling mightily and Kevin Lankinen was battling injuries. Following his signing on January 23 of 2020, he made just four appearances before play was halted in March.

The Hawks seventh-round selection in the 2012 NHL Draft, Tomkins seemingly has his biggest opportunity with the team since turning pro. He played well when called upon last season; we’ll see if he gets regular work as the Hogs begin action.

Rockford also has a pair of goalies signed to AHL deals. Tom Aubrun, who was signed to a two-year contract after a standout career at NCAA Division III Norwich University, is currently with the Indy Fuel of the ECHL, where he has seen limited action. Former Chicago Steel and Notre Dame goalie Cale Morris was signed to a one-year contract by Rockford back in October.

Lankinen is the only Hawks goalie who is waiver exempt. The way he has played early in the season for Chicago, it seems unlikely that he, Delia or Malcom Subban are sent to Rockford. This leaves Tomkins, Morris and Aubrun responsible for the pipes at the BMO.

Not so fast, pilgrim. Sunday night, Tony Androckitis of insideahlhockey.com reported that former Hogs and Blackhawks goalie Scott Darling had signed to play in Rockford this season.

Darling parlayed a strong first half of the 2014-15 season with the IceHogs into success with the Blackhawks and a big contract with Carolina. The Hurricanes later bought out Darling, who has struggled with his game the past three seasons.

At this point, I’m not sure if Darling signed a standard contract with Rockford or just a PTO, which runs for 25 games. As training camp progresses, we should see what role Darling plays for the IceHogs.

The IceHogs have a preseason game scheduled for the afternoon of Wednesday, January 27 in Hoffman Estates. On Friday, I will take a closer look at the landscape at forward and defense.