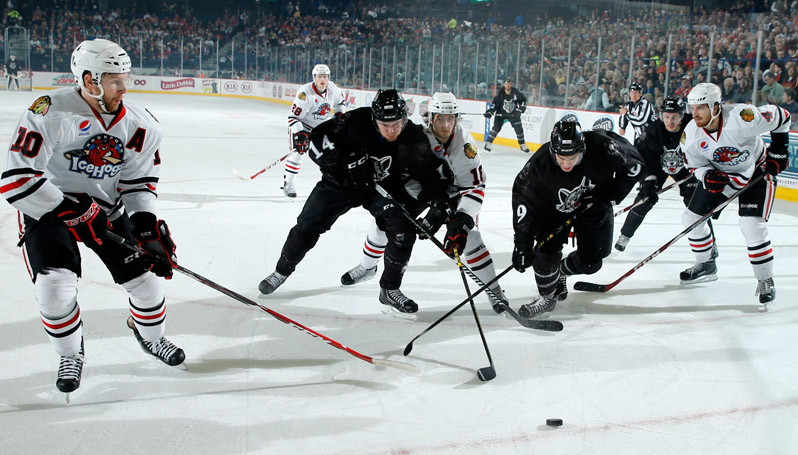 Chicago Blackhawks defensive prospect Stephen Johns missed nearly seven weeks of action following a concussion suffered back in Rockford November 26. Johns made his return to the lineup this past weekend for the IceHogs. It was fitting that he came back against the team he last played against.

Johns skated with Klas Dahlbeck Friday night against the Iowa Wild and Saturday in Chicago. The Hogs won both games and Johns showed he hasn’t lost his taste for contact.

It was Iowa’s Stephane Veilleux who hit Johns between the numbers in the second period of that November matchup. Veilleux, who was suspended a game for the hit, was also in the lineup Friday for the Wild.

Johns seemed to be playing without any tentativeness. He still was willing to deliver some big hits in both games this weekend.

Johns coming back was well-timed as Kyle Cumiskey has been out for the last three games with an upper body injury. The former Notre Damer had six assists before being knocked out of the lineup. Johns did not factor into the IceHogs scoring in his two games back but was a plus-two on Friday.

Is That My Ballot Showing?

The AHL had fan balloting decide the starting lineups at the All-Star Classic in Utica January 26. Voting ended about an hour ago, but I thought I would share the three players I chose for the Western Conference All Stars.

(Full disclosure: In order to submit my vote, I had to select starters for the Eastern Conference, which I don’t ever see. So I’m not sharing those random selections made so that I could vote for players I knew something about.)

You were allowed one player at forward, defense and goal. Here’s who I picked:

Forward-Teemu Pulkkinen, Grand Rapids. Yes, I snubbed Joakim Nordstrom, who I don’t see being sent down from the Blackhawks in order to be eligible to play. Pulkkinen has 20 goals and 19 helpers as of Monday. Why he isn’t in Detroit I don’t know.

Defense-T.J. Brennan, Rockford. There’s the home cooking for you. Not really, though, because Brennan leads the Western Conference with 31 points (8 G, 23 A) and is a plus-17 (tied for fifth in the AHL).

Goalie-Magnus Hellberg, Milwaukee. I’ve completed the all-Midwest Division slate. Hellberg leads the AHL with a 1.75 goals against average. He also has a .934 save percentage. Hellberg is 11-4-2 in 19 starts. You know who is 2-0 against Hellberg this season? Michael Leighton, who now owns a 2.11 GAA and a .929 save percentage. Leighton isn’t going to Utica next weekend (unless he’s going to watch Brennan play), but his numbers are certainly deserving. He also has the confidence of coach Ted Dent right now.

The Week In Review

The IceHogs managed to grind out a solid week of action, earning five of six points in their last three games. Rockford has a point in six of its last seven games.

The Hogs did manage a point after being down two goals but lost in their first meeting with the Checkers this season.

Charlotte got on the board first on a Brenden Woods tally in the 15th minute. Late in the period, former Rockford pugilist Kyle Hagel put a stick into the face of Brandon Mashinter. The invitation to dance was accepted and a bleeding Hagel was soon on his way to the locker room.

Rockford was down 2-0 late in the second period when Garret Ross came around the Charlotte net and found Danault for an easy goal. The IceHogs got the equalizer midway through the third period when Ryan Hartman got to the net to put back a rebound of a Dennis Rasmussen shot.

The teams went scoreless in overtime, with Charlotte taking the second point in the shootout. Alex Aleardi beat Leighton in the first round. Mark McNeill, Peter Regin and Matt Carey were all stopped by Checkers goalie Drew MacIntyre.

Leighton was a bit of a hard-luck loser, stopping 43 of 45 shots in 67 minutes of action. He was the game’s third star as he continues to play well.

Rockford got a 30-save shutout performance by Scott Darling against the Wild. Despite being outshot 30-26, the IceHogs built a comfortable lead in the first half of the contest and went on to a win over the Western Conference cellar-dwellers.

T.J. Brennan put a shot in front of the net 6:30 into the game. Brandon Mashinter was at the right post and the puck kissed cord via the leg of the big forward. Early in the second period, Dennis Rassmusen got an Iowa pass attempt under control in the slot. His shot went past John Curry to light the lamp 2:59 into the middle stanza for a 2-0 Hogs advantage.

The lead was extended less than three minutes later. Mashinter took a pass from Peter Regin and put a shot back behind Curry’s net. The rebound came out near the right post, where Pierre-Cedric Labrie pounced on the puck, sneaking it into the net before Curry could get across the crease. The goal put Rockford up 3-0 and ended Curry’s evening.

The fourth IceHogs goal came on the power play in the seventh minute of the final period. Garret Ross cleaned up a rebound of a Matt Carey shot given up by Johan Gustafsson. Ross collected the puck off of Gustafsson’s pads and sent the rubber home for his 13th goal of the season.

The line of Mashinter, Regin and Labrie was an effective combination Friday. Labrie was named the game’s third star, with Darling nabbing second star honors. Mashinter, with a goal and an assist, was voted first star honors. Any chances of Mashinter posting a Gordie Howe evaporated before the game when Kurt Gogol, the only guy on the Iowa club who seems to want to scrap with Mashinter, was scratched.

The IceHogs spoiled the evening for area Girl Scouts kicking off their cookie sales and won their fifth game in seven tilts with the Wolves this season.

It was Chicago grabbing the first lead 6:14 into the contest. Steven Johns got control of the puck in the corner but his attempt to start the breakout was nabbed by Magnus Paajarvi. Michael Leighton was beat between the pads as the Wolves went up 1-0.

Hartman slipped through the Chicago defense into open ice, showing backhand to Wolves goalie Jordan Binnington before pulling back to the forehand and lifting a shot over Binnington’s glove. The puck found the cord to its liking and the Hogs had tied the game at a goal apiece at the 8:03 mark.

Rockford took the lead 4:17 into the second period on a one-timer by Mark McNeill from the slot. The play was set up by line mates Garret Ross and Phillip Danault, who got the puck where McNeill could bang home his 12th goal of the season.

Thanks to Leighton, the IceHogs held the one-goal lead until the 12th minute of the third stanza. Following a T.J. Brennan cross checking penalty, Chicago got a Phillip McRae shot to go off Leighton’s pads and sit near the right post. Jeremy Welsh jumped on the rebound and sent it past Leighton to tie the game at the 11:38 mark.

Despite outshooting Rockford 16-8 in the third period and 6-3 in overtime, Chicago was denied the game-winner. Brennan dented twine in the bottom of the shootout’s second round and Leighton snuffed attempts by Shane Harper, Ty Rattie and McRae to pick up a key second point against Rockford’s Midwest Division neighbors.

The Hogs were outshot 46-22 on the night but Leighton was up to the task, earning the game’s first star honors. McNeill was voted third star.

The IceHogs are hosting Chicago this afternoon in a 1:00 p.m. start. Rockford travels to Iowa Thursday before returning to the BMO Saturday night for a showdown with the North Division-leading Utica Comets.