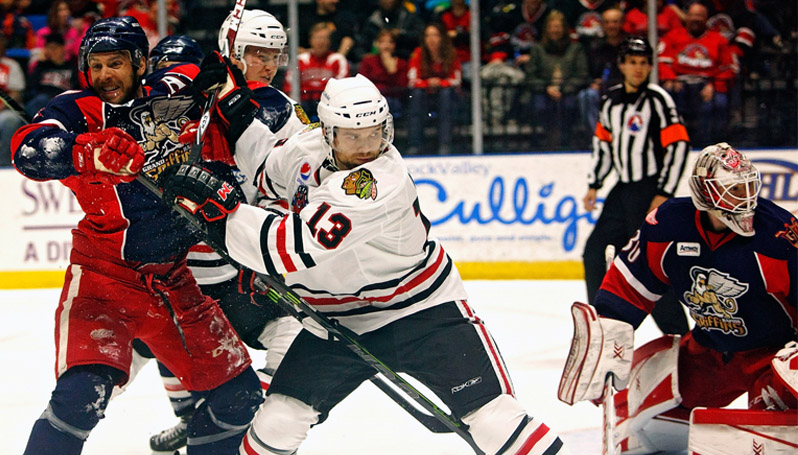 This is a mite busy time at work for me, so I’m keeping it pretty brief this week. The Rockford IceHogs managed three points over the weekend and had sellout audiences at the BMO Harris Bank Center on Friday and Saturday.

Those fans got to watch them split a pair of games with two of the highest point earners in the Western Conference.

Rockford obtained a defenseman Wednesday, picking up Brent Seabrook’s younger brother Keith from the Bridgeport Sound Tigers. Seabrook, who is 26, was swapped for future considerations.

Keith Seabrook was a second round pick of the Capitals back in 2006. He also spent time in the Flames and Panthers organizations. He has AHL experience but hasn’t played in the league since the 2011-12 campaign. He played the next season in Italy, then took another year off before signing an AHL deal with Bridgeport.

Seabrook played exclusively in the ECHL with the Stockton Thunder until the IceHogs brought him aboard. He dressed for the warmup on Saturday night but did not crack the lineup.

Rockford also sent Jamie Wise back down to Indianapolis on Friday. Wise had a pair of goals in his latest stint with the team.

Again, time is of the essence for me this week. No lines or special teams for now. I will update later tonight; just know that Spencer Abbott (pictured above) skated on a line with Dennis Rasmussen and Pierre-Cedric Labrie in his first two games with the IceHogs.

Free frozen custard flowed as the IceHogs easily handled the leaders of the West Division for their fourth straight win.

Peter Regin led off the scoring with a power play goal in the eighth minute of action. Stephen Johns followed that with his first goal of the season at the 11:32 mark, skating between the circles and beating Barons goalie Laurent Brossoit.

Oklahoma City made it 2-1 a few minutes later but early in the second period, Cody Bass got to a puck in front of the net and re-established the two goal lead. Recent acquisition Spencer Abbott was on the receiving end of assists from Johns and Pierre-Cedric Labrie to put Rockford up 4-1.

The Hogs never looked back, getting their final goal from their sophomore set. Garret Ross picked up his 18th goal of the season with help from Johns and Phillip Danault. Johns picked up the game’s first star, with Abbott and Michael Leighton (29 saves) filling out the top three.

The Griffins are red hot and have vaulted to the top of the AHL’s Western Conference. Rockford briefly held a third period lead but dropped this one early in the extra session.

Down 1-0 after 40 minutes, the IceHogs drew even as a Brandon Mashinter putback attempt slid under goalie Petr Mrazek and across the line 2:12 into the third period. Rockford took the lead when Zach Miskovic scored at the 6:26 mark but Grand Rapids knotted the game at two goals when Anthony Mantha outmaneuvered Antti Raanta just over a minute later.

The Griffins took the second point 1:27 into overtime when Andy Miele was left wide open in front of the Rockford net. Miele took his time, got Raanta guessing and struck gold to beat the Hogs. Miskovic, who had a goal and assist on the evening, was named the game’s second star.

Rockford travels this weekend, first to Grand Rapids for a Saturday night rematch with the Griffins. The IceHogs then visit the Chicago Wolves Sunday afternoon.