High On The Hog: Doin’ The Shuffle 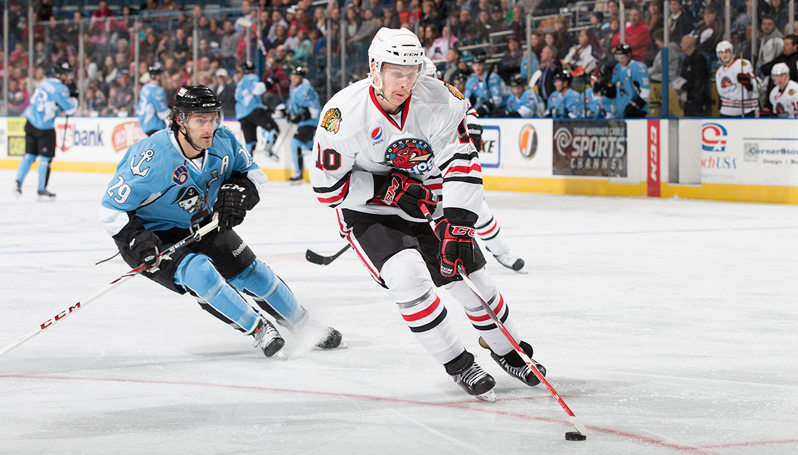 The Rockford IceHogs saw an eight-game win streak come to an end in with two losses to the Milwaukee Admirals in the first two games of a three-game weekend. Rockford finished their first three-games in three-nights stretch of the season with a home win in front of a pseudo sell-out audience at the BMO Center Sunday.

With that win, Rockford reclaimed the top spot in the AHL’s Midwest Division. They remain in the second spot in the Western Conference standings with 23 points in 16 games.

Moving On Up (And Down)

There has been a lot of recent movement on the I-90 pipeline this past weekend. The Rockford IceHogs saw their captain recalled to Chicago Saturday. The Hogs and Hawks flipped-flopped goalies over the weekend as well.

Joakim Nordstrom (5 G, 3 A, minus-one in 14 games) was recalled following the Blackhawks assigning Peter Regin to Rockford. Regin was with the team in time to play in Saturday and Sunday’s contests. Raanta was assigned to Rockford late Saturday night, after Darling had played in both losses to the Admirals. Darling backed up Corey Crawford in Chicago’s win over Dallas Sunday.

This isn’t good news if you are Mac Carruth and trying to make an impression with the organization. Carruth was brought up to Rockford early this week with Michael Leighton a little dinged up.

Leighton apparently was unavailable to play Sunday and Darling had manned the pipes two nights in a row. Unfortunately for Carruth, the Hawks would rather switch out Darling and Raanta than give Carruth an AHL start.

Will Raanta return to back up Crawford on the Circus Trip or does Darling pack his bags? Stay tuned. UPDATE, Monday, 4:15 p.m.-Raanta and Darling are passing each other on I-90 as we speak.)

With Trevor van Riemsdyk being injured Sunday night, an IceHogs defensemen may also get the call to hit the road with the Hawks. Who that could be if a recall is necessary could depend on a few factors.

Kyle Cumiskey, who came down when Michael Rozsival was ready to play last month, has been recovering from what is believed to be a concussion. He didn’t play this weekend but may be nearing a return. Klas Dahlbeck is probably the steadiest defender in the Rockford group and has the size to replace van Riemsdyk.

T.J. Brennan is the team’s top-scoring defenseman with 11 points (3 G, 8 A) and leads the IceHogs with a plus-12 rating. I’d say if someone is recalled, however, it’s Cumiskey or Dahlbeck. If it were up to me, it would be Dahlbeck.

UPDATE, Monday, 4:15 p.m.–…and the call-up is…Stephen Johns. I gotta be honest…don’t get it. Dahlbeck is NHL ready and is almost 200K easier on the cap. Might be something more to these moves and possibly more to come, but I’m scratching my head on this one. Uh…now that my jaw is off the floor, let me add that Nordstrom was also sent down this afternoon. Doin’ the shuffle, indeed.

Mark McNeill, who just received his CCM/AHL Player of the Week award in Rockford Friday night, took a puck off his right knee in Saturday night’s loss in Milwaukee. He sat out the last period of that game. McNeill skated in warm-ups Sunday but was not in the lineup.

With Rockford’s next action coming Friday, perhaps McNeill will have recovered enough to jump back on to one of the team’s hottest lines with Garret Ross and Phillip Danault.

Rockford came out flat, staked the Ads to a two-goal lead and dropped its first contest since October 22.

Milwaukee struck late in the first period via a power play goal. Mikka Salomaki stuck in a rebound off a Taylor Aronson slapper to put the Admirals up 1-0. Two minutes into the middle stanza, Aronson’s slapshot from the top of the Hogs zone got by a well-screened Scott Darling and Rockford trailed 2-0.

Rockford’s lone goal was a beaut, set up when Phillip Danault intercepted a breakout attempt by Milwaukee in the Ads zone. Milwaukee got the put back behind its net but Ville Pokka pinched in to swipe the puck from Michael Liambas along the left half boards. Pokka got the puck to Mark McNeill, who drove to the left post and backhanded a pass to Danault in the slot. The one-timer kissed cord and cut the deficit to 2-1.

Unfortunately, that’s as close as this game got. Seconds after the IceHogs goal, Ryan Hartman knocked Anthony Bitetto down with a big hit and was drawn into fisticuffs. It was all Bitetto in the bout and all Milwaukee from that point on. The Admirals added a power play goal and an empty netter in the third period to close out the game.

The Hogs dropped their second straight to the Admirals. This time Rockford played well early but the home team came up with a third-period tally to take the contest.

Teuvo Teravainen was hit by Richard Clune in the fifth minute of the opening period and drew an interference call. The Hogs couldn’t get much going on the power play. As Clune was coming out of the box, however, T.J. Brennan skated in and fed Teravainen outside the right dot. Teuvo’s aim was true on the resulting one-timer and the IceHogs held a 1-0 advantage. Ville Pokka was credited with the secondary assist.

As was the case the night before, this tilt was rife with physical altercations. Garret Ross took offense to Michael Liambas taking a run at Brennan and dropped the gloves in what amounted to a hugfest.

Late in the period, Clune met up with Cody Bass between the benches and got the best of the Rockford forward. These dust-ups did not put an end to the rough play in the second period.

Dennis Rasmussen was skating with his head down behind the Rockford net and Colton Sissons delivered a pretty clean check that sent the big center to the ice. Klas Dahlbeck engaged Sissons, earning 19 minutes of penalties for his effort.

Garrett Noonan tied the game in the 17th minute after a lengthy stay by the Ads in the Rockford zone. Tristan Grant sent home the game-winner from the right point with 7:22 remaining in the final frame.

Mark McNeill left the game late in the second period after taking a puck off his right knee. He did not return to action.

The IceHogs got back on the winning track despite playing their third game in as many days. Antti Raanta came down from Chicago to handle the crease, stopping 33 of 35 shots as Rockford handled the Stars.

The Hogs had plenty of pep in their step, out-shooting Texas 21-10 in the first 20 minutes. None of those shots found its way to the back of the net, but Rockford took the lead in the sixth minute of the middle frame.

After Adam Clendening was tripped at the 5:00 mark, the Hogs went on the power play. Peter Regin won the resulting draw. T.J. Brennan collected the puck off the boards and skated out to the point. He passed to Teuvo Teravainen, who skated to the bottom of the right circle and backhanded a pass to Brandon Mashinter in front of the crease. Mashinter tipped the puck past Stars goalie Jack Campbell at 5:11 to put Rockford up 1-0.

Texas tied the game midway through the second but the IceHogs regained the lead four minutes later. This time, it was Ross who benefitted from a Teravainen feed. Rockford was on a delayed penalty when Teravainen collected a long rebound from a Brennan shot. Teravainen connected with Ross coming down the slot and Ross made the deposit in the Bank of Biscuit. With 14 minutes gone in the second, the Hogs led 2-1.

That lead reached 3-1 midway through the third period when Brennan got in on the act. Regin was on the deck near the right post and managed to slide the puck across to Mashinter (didn’t look like he touched it, but he got the primary assist) and then to Brennan, who was heading to the back door. The shot beat curfew as well as Campbell and nestled safely in net to put the Hogs up 3-1. The Stars added a goal late but Rockford held on to post the win.

Rockford has another full slate this coming weekend. The Hogs host Iowa and Milwaukee Friday and Saturday night, then travel to Chicago to tangle with the Wolves Sunday afternoon.