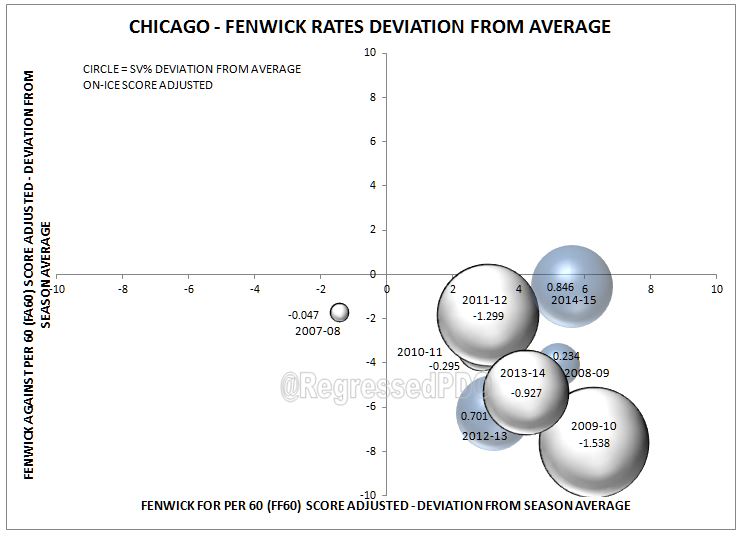 Chicago has been known as a puck possession team for quite a while now and rightly so. Over the last several seasons, they have proven to be one of the better and at times the best puck possession team in the league. Possession is important for obvious reasons. When you have the puck more, you have more chances to score. Possession metrics are also important for less obvious reasons. Shot suppression is very important to team success. I’ve used the graph below before, but it’s worth adding again here.

Using Fenwick rates for all NHL teams since 2007 through the end of last season, I found the average for each season and how the teams deviated from it. FF60 (Fenwick For Per 60) is from left to right, so the teams to the right of the vertical axis took shots at a rate higher than average for that season. FA60 (Fenwick Against Per 60) is top to bottom, so the teams above the horizontal axis allowed shots at a higher rate than average. The teams labeled with yellow triangles won the Stanley Cup. The teams labeled with blue triangles lost in the Stanley Cup Final. The 10-11 Bruins were nearly average in shot suppression and it took a Conn Smythe level effort from Tim Thomas to win the Stanley Cup. The 08-09 Penguins had a massive overhaul half way through the season that dramatically improved their shot suppression and allowed them to win the Cup over a tremendous Detroit team.

The point of talking about this is to show how important shot suppression is to success and give us a reference point to assess how the Blackhawks are doing in this regard this season. Using Score Adjusted metrics which have been shown to be more predictive of team success than measures at Score Close, we can compare this season’s team to prior seasons and other teams throughout the league.

When we use a linear trendline to look at the same metrics through 39 games, we see that Chicago’s FF60 is on the upswing and FA60 is trending downward. Again, these are both good indications for how the team is progressing.

To give you an idea of how this compares to Chicago’s past seasons, I’ve put together a moving average graph from the 2008-09 season through the first 39 games of the 2014-15 season. Again, all of these measures are using Score Adjusted FF60 and FA60 at 5 on 5. Hopefully this gives a little context.

Here is the same type of comparison looking only at these metrics from the 2012-13 season through the first 39 games of 2014-15 season.

The darker lines are the moving average and the lighter lines are the game by game numbers. Chicago’s offensive numbers have been on a fairly steady climb during this time. The defensive numbers have increased a bit as well despite being fairly low at this point in the current season. Earlier in the season, the FA60 moving average was frequently elevated above the marks seen in the earlier seasons on the graph. This is a bit problematic. Obviously, there has been a lot of flux in regard to defensive personnel this season so that may explain some of it; however, this trend should spur us to take a closer look.

Above is a graph showing how Chicago fit against each season’s average in terms of FF60, FA60 and On-Ice Save Percentage. The measures used are Chicago’s deviation from the average so being to the right of the vertical axis shows an FF60 that is above average (good). Being below the horizontal axis shows an FA60 which is below the average and therefore indicates the team is giving up less shots than average teams allow, which again is good. The circles represent the team’s deviation from average in Sv%. Blue is above average while white is below average.

The graph above shows the players FF60 and FA60 (score adjusted) last season and this season. The red markers show last season’s numbers for each player through 39 games. The blue markers show this season’s numbers for each player through 39 games. The only blue markers down in the mix with the markers from last season are from players who have not played very often such as Regin (now in the AHL), Van Reimsdyk (missing extended time due to injury), Morin (scratched often and traded) and Erixon (acquired and scratched often). Of the players getting regular time, Hjalmarsson has the best FA60 marks, followed by Kruger, Hossa and Rundblad. Rundblad, when he’s not scratched, gets pretty easy minutes against lesser competition and out of the offensive zone so his lower FA60 is not surprising. Hossa plays against top competition so his measures are more impressive. Kruger starts out of the defensive zone more often than anyone else on the team and frequently takes shifts against the opponent’s top line. He and Hjalmarsson have the most impressive numbers as a result.

Despite having the more impressive numbers compared to their teammate this season, Hjalmarsson, Kruger and Hossa all have higher numbers than last season. It is easy to see that the increase in FA60 is evenly distributed team wide. This would indicate that there is not any one player causing the problems with shot suppression, but that the problem is systemic in nature. Of course, some players are having more problems than others and when we are looking at defensive metrics, it makes sense to look to the defensemen. Both Oduya, who routinely faces top competition, and Rozsival, who routinely faces far lesser competition, show serious increases in FA60. Forwards are responsible for helping to curb shots allowed and some are better than others, but defensemen are the gate keepers of the team’s defensive zone. If they are allowing opposing players to enter Chicago’s defensive zone too easily or losing the puck when trying to clear or exit the zone, FA60 increases for all of the other players on the ice as well.

While it is not appropriate to place all of the blame upon a few players for the increase in shots allowed, better play would certainly help to change this problem. At this point, if that does not change with current personnel, Chicago will be left to anxiously await the return of Van Riemsdyk and rely more heavily upon forwards like Kruger, Toews, Hossa and others to help suppress shots. The more time they spend worrying about defensive tasks such as helping the defensemen break up zone entries, the less time they have to be ready for the breakout play to start their offensive attack.