Gruden’s Revenge: Why the Bears Could be on Hard Knocks 2021, and Why it Won’t Matter 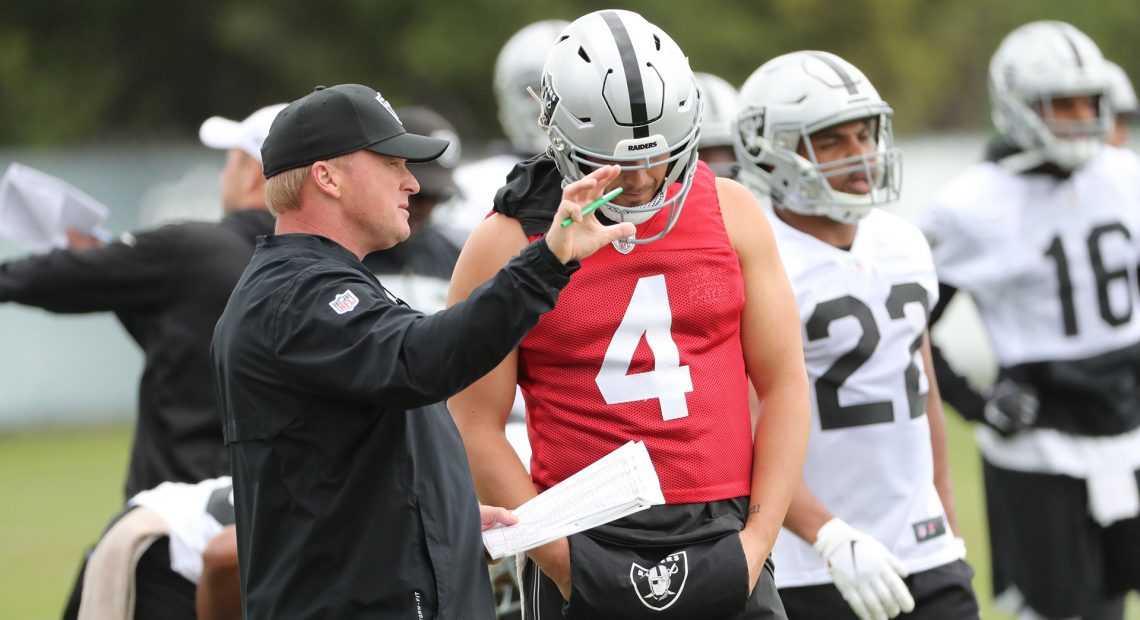 Hard Knocks season is upon us, and for the first time ever I am just not feeling it. For as long as I can remember, the first week of August finds me pumped as fuck that I share a Comcast account with my mother (yes I am 33 years old, thank you) and that she springs for HBO. Game of Thrones is cool and all, but I’ve had much more fun seeing Gerald McCoy talk about it, or hearing Chad Ochocinco telling the world to “kiss the baby”.

As of right now, league rules dictate that a team is eligible for Hard Knocks given that they haven’t been on the show in 10 years, haven’t been to the playoffs in two years, and don’t have a new coach that season. For this intellectual exercise, let’s make an assumption that the Bears don’t make the playoffs and are therefore eligible for Hard Knocks 2021.

At this point, I’m not even certain that Hard Knocks will exist because of how poorly this year’s season is going to go. Derek Carr is angling so hard for a reality tv show that it makes me actually cringe. Antonio Brown’s saga is most likely to be the focus of episode 2, but I’m not optimistic. I’ve seen a number of think-pieces over the last couple days all centering around the idea that the AB situation is going to inform the audience exactly how much autonomy HBO has in what is included and what isn’t. Charles Robinson from Yahoo Sports brings up some interesting points, mainly that episode 1 really glossed over a lot of the specific details about AB’s feet, and his helmet, and his threats to retire. Will HBO push back and air the inside details of this buck wild situation, or are they gonna toe the company line and only allude to what we’re all reading on Twitter constantly, maybe acknowledging it with a subtle look at the camera, like Antonio did in episode one when his children were asking where Ben Roethlisberger was?

You know what would be a bummer? Either of those options, for different reasons. For one, what makes Hard Knocks so compelling is often the stories regarding roster bubble players that really put a touch of humanity into the cold business that is NFL training camps/the NFL itself. Football is so barbaric, and we determine a player’s value by how fast they run or how strong they are, and it’s then so powerful to see something like a 4th string tight end’s battle with cancer, or an undrafted free agent defensive lineman’s ability to do a great impression of some veteran on the team. Spending an hour of your eight only on one player would lose what makes HK great.

Conversely, we know the teams hate Hard Knocks. The league allows it for the same reason that it allows all the other things everyone on the inside hates; television shows that give people access to the players makes the league more accessible. In that sense, the NFL needs HBO, but if HBO doesn’t have the freedom to tell the entire story, it cheapens the entire endeavor. It isn’t exclusive anymore. We aren’t insiders. We are all still seeing the NFL-approved narrative. Look, I don’t mind following a pre-determined narrative (I am literally watching SummerSlam right now), but if there’s a league that you know buries more skeletons than HH Holmes, it’s the one that plays on Sunday. Is it a coincidence that they show noted bigot and bully Richie Incognito walking into the first meeting of the year, moments before Gruden talks about how no hazing will be allowed?

Either way, this show is going to be ruined by the Raiders. Gruden is so corny, y’all. SO CORNY. I’ve never seen someone work so hard to pretend like the camera being on them doesn’t change who they are. I’ve worked in education for seven years now, and his “talking to” of Johnathan Abram for hitting too hard before the padded practices started was the cringiest thing I’ve ever fucking seen. It reminded me of myself, as a substitute teacher in Chicago. I worked in a middle school where the students got the first year teacher to quit after her second day. They brought me in to kill time while looking for a new Science teacher, and Gruden was pretty much 26 year old me, trying to get students to follow rules I didn’t create, didn’t want to enforce, and knew they wouldn’t follow. Abram clowned Gruden to his face, and Gruden just took it like someone who just wanted to not cause any conflict before getting back into his Grandpa’s 2002 Jeep Grand Cherokee to drive back to Lake in the Hills and pass out at 8pm, because starting a fight wasn’t gonna change anything anyways and it’s above his pay grade.

If the Bears make it to Hard Knocks in 2021, best believe the show will have nowhere near as much clout or cultural capital as it does now, and I will blame the shitshow that is happening this season for that. The NFL will continue to tell us that we have insider access to the hidden machinations that run this league, and after this year, I’m afraid nobody will be able to believe it anymore.