Game #44 – Flames vs. Hawks Preview: Trying To Find The Heart 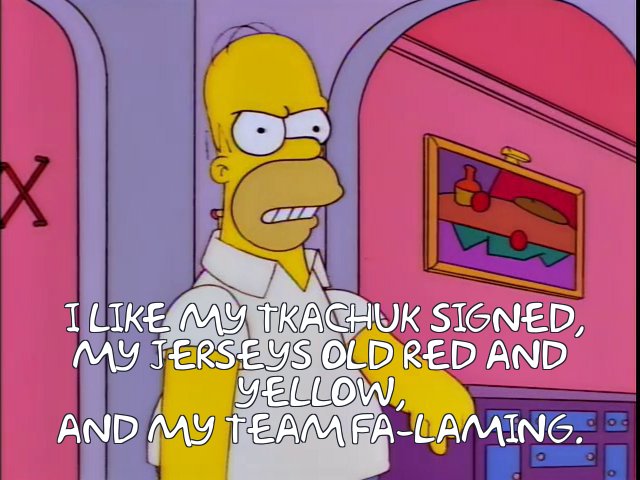 This week, the Hawks get a chance to put a couple things…well, not right but at least improve. One is their home record. They moved just over .500 with the win over Detroit, but they simply have to be better on Madison St. Second, they can get a couple wins over teams around them in the standings, which they can claim they are competing with for wildcard spots. They did get one over on the Flames last week, which was a departure, but generally this has been a sore spot for them. Calgary is visiting tonight and Nashville on Thursday, and those just happen to be two of the three teams between them and the final playoff spot.

Obviously, not much has changed with Cal and Gary since these two spent New Year’s Eve together (I assume loudly singing along to Lizzo like everyone else). They beat the Rangers at home on the 2nd and then snuck out of St. Paul with a shootout victory on Sunday. So the issues are basically the same. As we like to say around these parts, they can’t hit a bull in the ass with a banjo. They have the fourth-worst SH% at evens in the league, which belies the talent on display here through Monahan (Lisa needs braces…), Gaudreau, Tkachuk, et al. You still have to figure that will correct at some point and send the Flames toward the automatic spots in the Pacific, which they’re only two points behind and two of which are occupied by the Coyotes and Oilers. Most would guess those teams will deflate before the end of the season.

Still, something is more amiss up in Southern Alberta. This team was something of a possession monster under Bill Peters, which is something he just tended to do for his teams (as well as kick them and be racist toward them). This year, even before his dismissal, that’s not been the case. Some of it is Mark Giordano aging, and some of it is just no one else stepping up to fill in some of that gap. Recently they’ve split Gio and T.J. Brodie, perhaps to get some more push from a different pairing. But Brodie’s always been a bit lost without Giordano, so that’s a risk.

Another problem for them is a top line that just hasn’t fired at the pace they’re accustomed to. Monahan and Gaudreau have been point-per-game players before, and neither are there at the moment or anywhere close. Gaudreau especially seems to have eschewed getting to the middle of the ice, and is doing something of a mini-Getzlaf act on the outside. This has hurt Monahan’s game, as he thrived on the havoc Johnny Hockey used to cause in the offensive zone. They attempted to replicate this by moving Mikael Backlund to wing on the line and getting him in the middle, but that had middling results. Now they’re shuttling Elias Lindholm between 2C and 1RW, which is also having the benefit of making it clear what the Flames need to go get before the deadline.

Either way, this was a team that until the last meeting had given the Hawks fits, because it’s one of the many that is significantly faster than them. They weren’t much at the races against the Hawks for the first 30 minutes last Tuesday, allowing the Hawks a 4-0 lead. But once they realized they were about to be embarrassed, traffic flowed in only one direction and the Hawks were even somewhat lucky to get out of there with a rare regulation win. You can expect the Flames to be a little more attuned tonight.

Still, their goaltending has been a little wayward. Big Save Dave has given up 11 in his last three starts (including the Hawks game), and Cam and Magic Talbot gave up three at home to the Rangers. So maybe the Hawks can find some joy there.

As for the Hawks, I wouldn’t expect any changes. Robin Lehner wasn’t in the starter’s net at the morning skate and is still working through his minor leg problem. Look for him Thursday. There’s no reason to change any of the lineup, though Dennis Gilbert took a shot off the ankle at practice. But that couldn’t make him any slower. Maybe Fetch slides in for him, which whatever. After scoring his first NHL goal it would be heavily cruel to sit Dylan Sikura and lose the confidence he just gained. So Alex Nylander’s useless ass can stay in a suit.

As we’ve said, this is a part of the schedule the Hawks can make their season meaningful in. The Flames are a confused bunch, and the Preds even more so after firing their coach. The Ducks suck, and then they’ll get two games against either a rebuilding dreck like the Senators or yet another confused bunch in the Habs before having to try and catch the Leafs in Toronto. Either you are or you aren’t, and these next two weeks should tell us which. Even if you think you already know.